Expired News - Newest egg may make world's oldest seabird a 37-time mother - The Weather Network
We use cookies on this site to improve your experience as explained in our Cookie Policy. You can reject cookies by changing your browser settings.   READ MORE I ACCEPT

News
Editor's Choice
The 'megaspider': It can bite through fingernails
ANIMALS | Prolific mother

Sunday, December 9, 2018, 6:02 PM - Does wisdom come with age? Maybe not for everybody, but, at least in the case of this particular prolific mother, the two are definitely a pair.

Midway Atoll National Wildlife Refuge is the nesting ground for many albatrosses, but none of them are as famous as Wisdom, a Laysan albatross believed to be at least 68 years old -- making her the oldest known, banded seabird in the world. Wisdom and her mate, Akeakamai, have returned to the nesting grounds every year since 2006, and biologists have confirmed that the pair is not only back again this year, but are incubating another egg. Wisdom is believed to have hatched as many as 36 chicks as of earlier this year, meaning should the current egg result in an healthy chick, she would be adding a 37th branch to her family tree. “Because Laysan albatross don’t lay eggs every year and when they do, they raise only one chick at a time, the contribution of even one bird to the population makes a difference," reads a 2017 release from the wildlife refuge.

Wisdom was first banded in 1956, during a survey of nesting birds on the island (which was, at the time, an important outpost for the U.S. Navy). She was just one of some 8,400 albatrosses banded that year. The birds begin nesting at 5 years of age, which is how researchers were able to estimate her age at the time. Wisdom, and her other albatross kin, spend 90 per cent of their lives at sea, but return nearly every year to spend the colder months of the year at the spot they themselves hatched. This behaviour, called "nest site fidelity" by biologists, is part of what makes preserving nesting sites with large numbers of birds -- like Midway -- so important to the birds' survival.

BELOW: WISDOM'S NESTING SITE IN THE MID-PACIFIC


The incubation and fledging period for the Laysan albatross is about seven months, during which time Wisdom and Akeakamai will take turns, one watching over the nest while the other heads out to sea for food. While the nesting site is no longer threatened by human activity on the island, our activity at sea is another matter entirely, as the amount of plastic and other pollution in the ocean grows. Not only is the waste a hazard for the adult birds, chicks can also die when their parents mistakenly gather bits of plastic and other garbage to feed to the young. 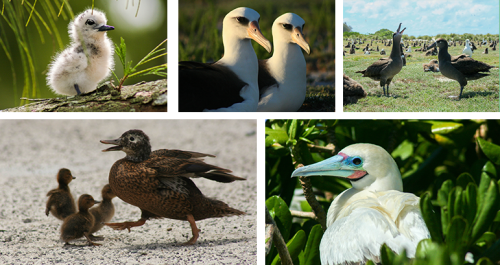 WATCH BELOW: IS THIS THE SOLUTION TO PLASTIC IN OUR OCEANS?