Expired News - Will a strong La Niña follow near-record El Niño 2015? - The Weather Network
We use cookies on this site to improve your experience as explained in our Cookie Policy. You can reject cookies by changing your browser settings.   READ MORE I ACCEPT

News
Editor's Choice
Why is ice so slippery?
OUT OF THIS WORLD | Earth, Space And The Stuff In Between - a daily journey through weather, space and science with meteorologist/science writer Scott Sutherland 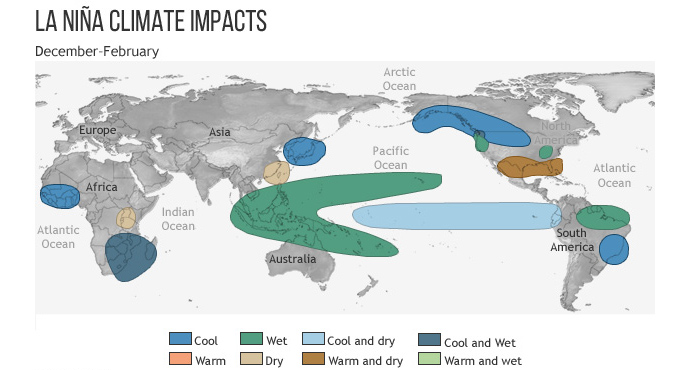 Monday, April 18, 2016, 5:00 PM - With the Pacific Ocean cooling off after a near-record El Niño, signs are pointing to an impending La Niña - the flip-side of El Niño. So, what are the odds, and if one does develop, how strong could it be?

Ever since El Niño 2015 reached its peak in November, forecasters have been anticipating its eventual dissipation, and there has been keen interest in exactly how that will proceed, as a strong El Niño frequently leads directly into a La Niña.

This El Niño hasn't been making things easy, however. As of the mid-March analysis by forecasters at Columbia University's Earth Institute, the odds of seeing a La Nina or having some mix of El Niño and neutral conditions developing by the end of the year were still fairly even. It has only been at the latest forecast update that the chances of a La Niña developing jumped to over 70 per cent.

As a result of that significant jump in probability, while the El Niño Advisory continues due to current conditions, NOAA forecasters have issued a La Niña Watch, based on what they're seeing in computer model runs.

Conditions are now expected to be "neutral" by late spring or early summer, and will very likely transition into a La Niña by late summer or early fall.

As for the potential strength of an upcoming La Niña, should one develop, history can give us some insights.

There does seem to be a correlation between significant patterns, though. Thus, after the pattern swings significantly in one direction - either a strong, sharp peak or a prolonged event - there tends to be a significant counteraction in the opposite direction.

With the current El Niño having matched the overall strength of the strongest pattern in the record books (from 1997-1998), from just a glance at the similar El Niños from the past, it's easy to see how something significant should develop later this year in response.

While there is still the potential for this El Niño to have a few surprises in store for us, given the greater certainty of the latest forecast, the questions are shifting from "when will the El Niño be gone?" and "will there be a La Niña?" to "how strong will the La Niña be?" and "how long will it last?"

As it stands now, it's too early to tell exactly how strong of a La Niña we could see by fall, or how long it could last, but based on the past, the pattern could develop along a few different paths.

It could swing sharply into a record-breaking La Niña. This is what happened in 1988-1989, after the strong, double-peaked El Niño in 1986-1987. It may produce another multi-year La Niña, like there was following the sharp, very strong El Niños in 1982 and 1997. It could also result in a combination of the two - a record or near-record event in both strength and duration.

Some forecast models - shown to the right - favour conditions that swing back towards an El Niño (and one even takes that to an extreme), but that's fairly unlikely. Most others indicate a La Niña, with one - from the Scripps Institution of Oceanography - even dropping off the deep-end of the scale leading up to November. That Scripps result is as unlikely now as the return to El Niño conditions, but that's the benefit of ensemble forecasting. Regardless of the "scatter" shown in the individual results, reality will likely play out somewhere in the middle.

The most likely outcome, based on the current look, is a moderate to strong La Niña - somewhere in the -0.5oC to -1.5oC range - by January. After such a sharp spike during the El Niño, the pattern is likely to last for at least a few years, and there's even the potential for it to match - or possibly exceed - the 1999-2001 La Niña in strength and duration.

However, as Robin Kovach, a research scientist with NASA's Global Modeling and Assimilation Office (GMAO), said in March: "This current El Niño has been different so it will be interesting to see what happens in the next forecast and the coming months."

What does this mean for Canada?

In a year when strong La Niña conditions dominate, its effects tend to be ramped up over the usual pattern (shown above) and even expanded. Thus, a strong, prolonged La Niña over the next few years could bring more cold, snowy winters across Canada, similar to what was seen in 2014 and 2015.

Strong La Niñas tend to have a strong influence on global temperatures as well. While global warming continues to turn up the thermostat on the world, there's still some variation from year to year, and La Niña years usually come in on the slightly cooler end of the scale. Thus, while 2015 and 2014 now rank as the hottest and 2nd hottest years on record, and 2016 is making a strong play to be the newest resident of the top slot on that list, if a La Niña develops, it's unlikely that 2017 will continue the trend.

Stay tuned for more updates as they come in.

Watch below: Dr. Doug and Jaclyn Whittal discuss how El Niño will continue to impact us this summer.