Expired News - New plans emerge to deal with looming risks of space weather - The Weather Network
We use cookies on this site to improve your experience as explained in our Cookie Policy. You can reject cookies by changing your browser settings.   READ MORE I ACCEPT

News
Editor's Choice
Canada's 2022/23 Winter Forecast revealed, here
The past week has not only provided some amazing displays of the Aurora Borealis, but also a stronger commitment from agencies around the world to addressing the dangers of extreme space weather.
OUT OF THIS WORLD | Earth, Space And The Stuff In Between - a daily journey through weather, space and science with meteorologist/science writer Scott Sutherland

Friday, November 6, 2015, 6:57 PM - The past week has not only provided some amazing displays of the Aurora Borealis, but also a stronger commitment from agencies around the world to addressing the dangers of extreme space weather.

Just as NASA was preparing to announce the discovery that Mars' atmosphere had been slowly stripped away by the solar wind, agencies in the US and in Europe released new plans to improve space weather forecasting, and to improve our response to any future events.

Although the presence of Earth's protective magnetic field means our planet will never succumb to the same fate as Mars, at least for the foreseeable future, the fact is, interactions between the magnetic field and various types of solar activity have the potential to negatively impact the technologies we so heavily depend upon in today's society.

Due to this fact, on October 29, 2015, the White House released two new documents - the National Space Weather Strategy and the Space Weather Action Plan - meant to address gaps in how US agencies "understand, model, predict, respond to, and recover from space-weather events."

According to the new US plan:

The newly released National Space Weather Strategy (Strategy) and Space Weather Action Plan (Action Plan) were developed by an interagency group of experts, with input from stakeholders outside of the Federal government, to clearly articulate how the Federal government will work to fill these gaps by coordinating, integrating, and expanding existing policy efforts; engaging a broad range of sectors; and collaborating with international counterparts. The Strategy identifies goals and establishes the guiding principles that will guide these efforts in both the near and long term, while the Action Plan identifies specific activities, outcomes, and timelines that the Federal government will pursue accordingly.

Just one week later, on November 5, 2015, the European Space Agency announced their own measures to step up forecasting and response, bringing together experts from 14 different nations in the European Union to develop a new warning network for space weather events.

ESA’s Space Situational Awareness efforts now generate almost 60 ‘products’ – including high-quality measurements, forecasts, alerts and expert analysis – from teams participating in the Agency’s space weather network, heading for over 140 next year.
Many use realtime data on our Sun and the resulting disturbances detected in the environment around Earth, our atmosphere and down to the surface.

The agency's monitoring network already includes a large number of sensors, both on the ground and in space, and more are planned for the future, as new satellite missions that include ESA space weather instruments are launched into orbit.

What is space weather?

Any time there is solar activity that produces effects in the space between the Sun and the Earth, scientists refer to this as space weather.

Solar flares are explosions of magnetic energy on the surface of the Sun. The weakest flares happen almost continuously, while the strongest (X-class) are fairly rare, and those flares of at least moderate strength tend to send out sprays of high energy x-rays which can cause radio blackouts as they shower the day-lit side of Earth.

The solar wind constantly streams away from the Sun, and as it interacts with Earth's magnetic field, it can touch off geomagnetic storms, blanketing the regions around the planet's poles with vivid auroral displays.

Coronal mass ejections (CMEs) are immense eruptions of charged, magnetic matter that blast out into space, usually as the result of a solar flare. When these clouds of solar plasma reach Earth they can spark off geomagnetic storms, some of which can be very intense, with auroras that extend far away from polar regions.

Where does the danger lie?

Although watching the ethereal beauty of auroras can be an amazing and rewarding experience, they aren't the only effect that comes from geomagnetic storms. These disruptions to Earth's magnetic field are capable of causing problems with orbiting satellites, by knocking out communications and causing system anomalies due to interactions with high-energy particles. They can even cause excess currents in power grids on the ground, tripping safety switches on transformers and plunging us into darkness.

Some of these geomagnetically-induced blackouts only last for hours, as crews reset safety systems and the grid is brought back online. Stronger storms can actually cause damage to high-voltage power transformers, and depending on the size of the power grid, it could take days, weeks, or even longer for all the damage to be repaired.

This is not simply speculation, though. It has actually happened.

On March 10, 1989, a powerful X-class solar flare went off more or less aimed directly at Earth. Just minutes later, radio blackouts occurred as the high energy x-rays from the flare reached us. Three days later, the immense coronal mass ejection that was blasted out into space by the flare swept past the planet. As it did, the cloud of charged solar particles interacted strongly with Earth's magnetic field. As a result, intense auroras were seen as far south as Florida and Texas, satellites suffered anomalies and communication failures and the Space Shuttle Discovery, in orbit at the time, also recorded problems that were associated with the arrival of the CME. On the ground, the disturbance to Earth's magnetic field introduced excess currents in the very long high voltage power lines that stretch across the province of Quebec. Within 90 seconds of the arrival of the CME, safety devices on the Quebec power grid tripped, and the entire province was suddenly without power for a total of 9 hours. 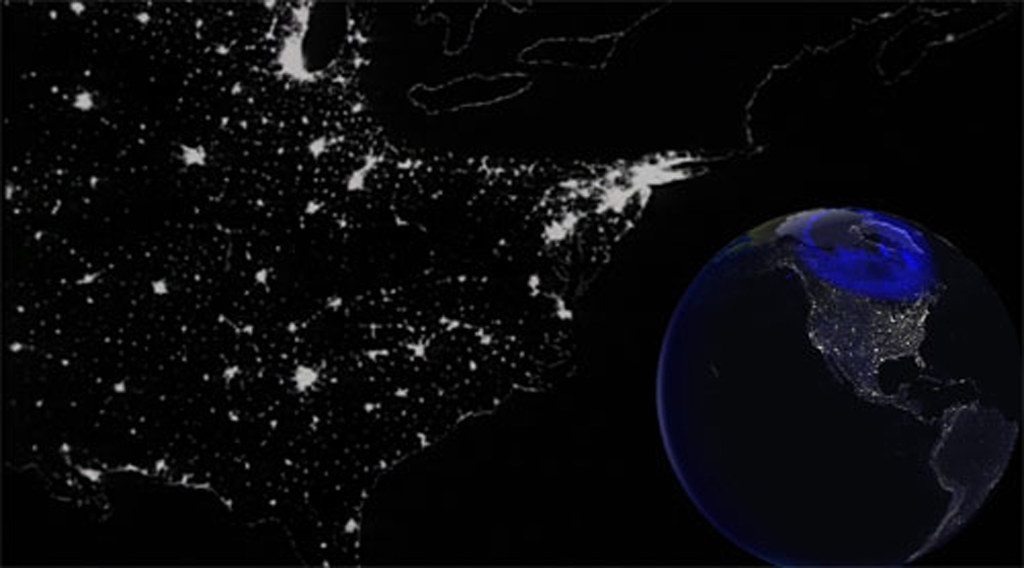 Artist's rendition of the March 1989 Quebec blackout and the March 13 auroras. Credit: NASA

Roughly 5 months later, in August 1989, another geomagnetic storm that happened due to an even more powerful X-class flare was blamed for the crash of three disk drives used by the Toronto Stock Exchange, bringing all trading to a halt.

Older events, in 1921 and going back as far as 1859, featured even stronger flares and more intense geomagnetic storms, however the level of technology and extensive reach of power grids we have today were not present at those times.

The 1859 Carrington Event has taken on an almost legendary status. The largest solar flare ever recorded in modern times was in early November 2003. At the time, it was rated as at least X-28 class, but subsequent study put it as high as X-45 class, since the detector was completely saturated by the flare's energy. The flare that touched off the events of September 1859 was even more powerful, and actually has no number associated with it. It is simple called a Carrington-class flare, and it is used as a "worst case" scenario when it comes to space weather events.

Based on the documented impacts of the Carrington Event on just the limited telegraph systems that were in operation at the time, a recent Lloyds of London study estimated the cost of a similar event occurring today would run as high as $2.6 trillion. Since that value is only for the United States alone, the costs worldwide would be even higher.

Could it really happen again?

Not only could another Carrington Event happen at some point, one almost did happen in the summer of 2012.

Rather than one powerful solar flare going off, as happened in September 1859, a series of three coronal mass ejections blasted out in in July of 2012, from three different M-class solar flares. These three CMEs in succession produced an exceptionally large, especially fast-moving CME by the time it swept through Earth's orbit. Fortunately for us, the solar flares that emitted these CMEs had rotated away from Earth by that time, so the combined cloud of solar plasma passed through a portion of our orbit that was ahead of where the planet was at the time. The far edge of the cloud scored a glancing blow off of Earth's magnetic field, causing some impressive aurora displays, however the bulk of it missed. According to scientists who studied this combination of extreme space weather, had the flares gone off just one week before, thus aiming the coronal mass ejections more directly at Earth, we would have taken the full brunt of the CME impact.

"If it had hit, we would still be picking up the pieces," Daniel Baker, of the University of Colorado's Laboratory for Atmospheric and Space Physics, told NASA in 2014.

What have we been doing about it so far?

Agencies like NASA and the ESA have been monitoring space weather for decades now.

Currently, there are several satellites in space for this purpose, including:

Together, these spacecraft provide scientists on the ground with observations of sunspots and solar flares, filaments, coronal holes and coronal mass ejections, which help forecasters model both the solar wind and CMEs, to determine their potential impacts once they reach Earth.

In addition to monitoring, strategies have been developed since the 1989 blackout to address the vulnerabilities of power grids, to ensure that we will have ways of preventing a similar event, or at least minimizing the impact of it.

Hopefully, with the introduction of these new efforts from both the US government and the European Space Agency, we can not only improve forecasting, mitigation and response to space weather events, but we can have even more reliable notice of when we will be able to witness amazing auroral displays.

With the flare going off almost directly towards Earth, and with space weather forecasters spotting an accompanying coronal mass ejection, there was some concern that it could cause problems when this Earth-directed CME arrived here later in the week.

Originally expected to arrive on Saturday afternoon, an update from NOAA's Space Weather Prediction Center put the arrival at the ACE spacecraft a day early, on Friday at 12:35 p.m. EST and at Earth an hour later. Forecasters are expecting a minor (G1) geomagnetic storm on Friday night, with it potentially continuing through into Saturday. Given the CME's early arrival, and thus higher speeds, it is possible that the geomagnetic storm level may be higher than G1 before the night is out.

In either case, residents of northern Quebec, northern Ontario and the Prairie Provinces (not to mention the northern Territories) should be on the lookout for auroras tonight.

Watch Below: This NASA Goddard animation compares the effects of a moderate CME from 2006 on Earth's magnetic field, to the Carrington Event of 1859.