Expired News - Baseball-sized hail: How hailstorms can devastate and kill - The Weather Network
We use cookies on this site to improve your experience as explained in our Cookie Policy. You can reject cookies by changing your browser settings.   READ MORE I ACCEPT

Baseball-sized hail: How hailstorms can devastate and kill

Tuesday, July 31, 2018, 3:23 PM - To people in Vivian, South Dakota, it must have seemed like a divine rebuke when, in July 2010, a storm pummelled their community with massive hailstones, with the largest specimen reaching 20 cm across, or about 8 inches -- the largest on record.

That’s about as long as eight loonies side-by-side. Take a moment to just picture that in your head.

There can be a tendency to underestimate the destructive power of a hailstorm because, for many people, hailstones get no larger than marbles -- a nuisance if you’re caught out in them, but not likely to do much of a number on your home or vehicle.

But though underrated compared to more famous thunderstorm impacts such as tornadoes and lightning, people who live in places prone to the strongest thunderstorms know that, if the conditions are right, hail can be large enough to cause catastrophic damage -- and even kill. 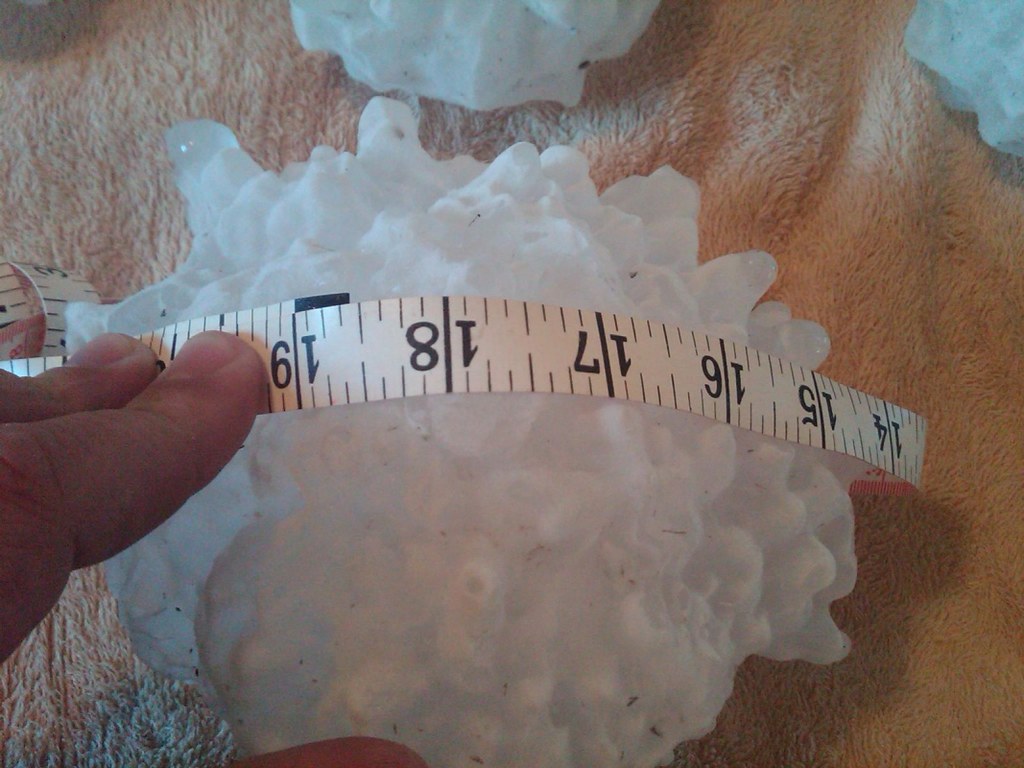 Though the U.S. is no stranger to extreme hail, Canada also has some serious hailstorm chops.

The Edmonton Tornado of 1987 was part of a storm that produced hail as large as tennis balls, according to later surveys.

But those stones are driveway pebbles compared to one measured in Bangladesh in 1986, which was an enormous 1 kilogram, or 2.25 pounds. That massive stone was part of a monstrous storm that lashed the country’s Gopalganj district. Most chillingly, aside from the damage, this storm is also notable for killing 92 people.

People in North America, where hail fatalities are relatively rare, might greet that incredible death toll with some skepticism. But hailstorms can absolutely kill when the hail is large enough, and the human cost can be staggering.

The deadliest-known hailstorm lashed the Indian city of Moradabad in 1888, dropping hail the size of oranges. By the time the storm had moved on, 246 people lay dead.

When we’re talking about meteorological history-makers, most writers take care to add the caveat “on record.” It’s a recognition that when it comes to the weather, there may be even more staggering weather extremes in Earth’s long history either unseen by human eyes, or not written down for posterity.

WATCH BELOW: CONTROL THE SIZE OF HAIL? ONE CANADIAN COMPANY SAYS 'YES'


And, in some cases, a particular storm may have been missed simply because it left no survivors.

It would be hard to imagine what went through the mind of a certain British forest ranger in Roopkund, India, when he happened upon some 200 skeletons clustered in and around a frozen lake at 16,000 feet above sea level.

That was in 1942, and the gruesome discovery went unexplained for decades, until a research team examined the site in the early 21st Century. Aside from establishing the massacre happened around 850 C.E., the victims were found to have died from repeated blows from “blunt, round objects about the size of cricket balls” (According to Atlas Obscura) -- just the kind of size hail would need to be to kill or seriously injure a human being.

The idea of hail large enough to kill you is frightening but, in North America at least, such major hailstorms are statistically less likely to result in fatalities.

No, when hail storms strike, the fear is less the potential loss of life, than it is the extreme and costly property damage.

Canada doesn’t get anything like the levels of confirmed tornadoes as the U.S. as a whole, but it is still one of the world’s most thunderstorm-prone nations, and when those storms produce damaging hail, there’s usually a hefty price tag attached.


Large hail is especially prevalent on the Prairies. The year 2008 was particularly a bad one for the region. That year, Environment Canada reports the Canadian Crop Hail Association was forced to pay out some $341 million across the region, with more than 29,000 claims.

The lion’s share of those payouts was in Saskatchewan, valued at some $228 million, which Environment Canada says was the highest in the province’s history. The number of claims filed, 21,000, was three times more than the previous year.

Outside the cities, the number of acreage affected was also a record. Environment Canada says hailstorms happened somewhere in Saskatchewan almost every day in July that year, and storms on July 9 and July 10 together accounted for some $80 million in payouts.

Those eyebrow-raising costs were spread out over a large region, but individual hailstorms can be terrifically destructive as well.

WATCH BELOW: Hail takes down trees in Alberta backyard


In July 2010, Calgary was the target for just such a tempest. A 30-minute storm pummelled the city with rain, powerful winds and hail up to baseball-sized, at a time when streets and parking lots were crowded with cars. Vehicles and structures suffered heavy damage while, outside the city, some 90,000 hectares of farmland also bore the brunt.

According to Environment Canada, insurers reported claims totalled at $400 million, making it the single costliest hailstorm in Canadian history. By unhappy coincidence, the event didn’t unseat Calgary from the top of the list -- the city was already the site of the previous costliest hailstorm, in 1991, which resulted in claims of $340 million.

And incredibly, it could have been worse.

Like Canada and the U.S., Australia has its share of severe thunderstorms, but one that will be remembered for a very long time rolled into Sydney in April 1999.

This monstrous storm, lasting several hours, dropped the equivalent of half a million tonnes of of hail onto the city, with stones as wide as 9-11 cm, hitting their targets at 200 km/h.

By the time it was over, 32,000 homes and 43,000 cars had been several damaged or destroyed. The $1.7 billion in insured losses left in the storm’s wake made it Australia’s single costliest.

In the U.S., where severe thunderstorms are the norm in at least one part of the country on a given day for most of the year, Atlas Obscura says hail is responsible for around $1 billion in building and crop damage annually. In April 2001, a single storm in St. Louis, Missouri, caused as much as $2 billion in damage.

WATCH BELOW: Drone video shows MASSIVE Kansas storm from a distance and it's remarkable