Expired News - NASA probe discovers global ocean under Enceladus' icy crust - The Weather Network
We use cookies on this site to improve your experience as explained in our Cookie Policy. You can reject cookies by changing your browser settings.   READ MORE I ACCEPT

News
Editor's Choice
Get the best deals on weather products this Black Friday
OUT OF THIS WORLD | What's Up In Space! 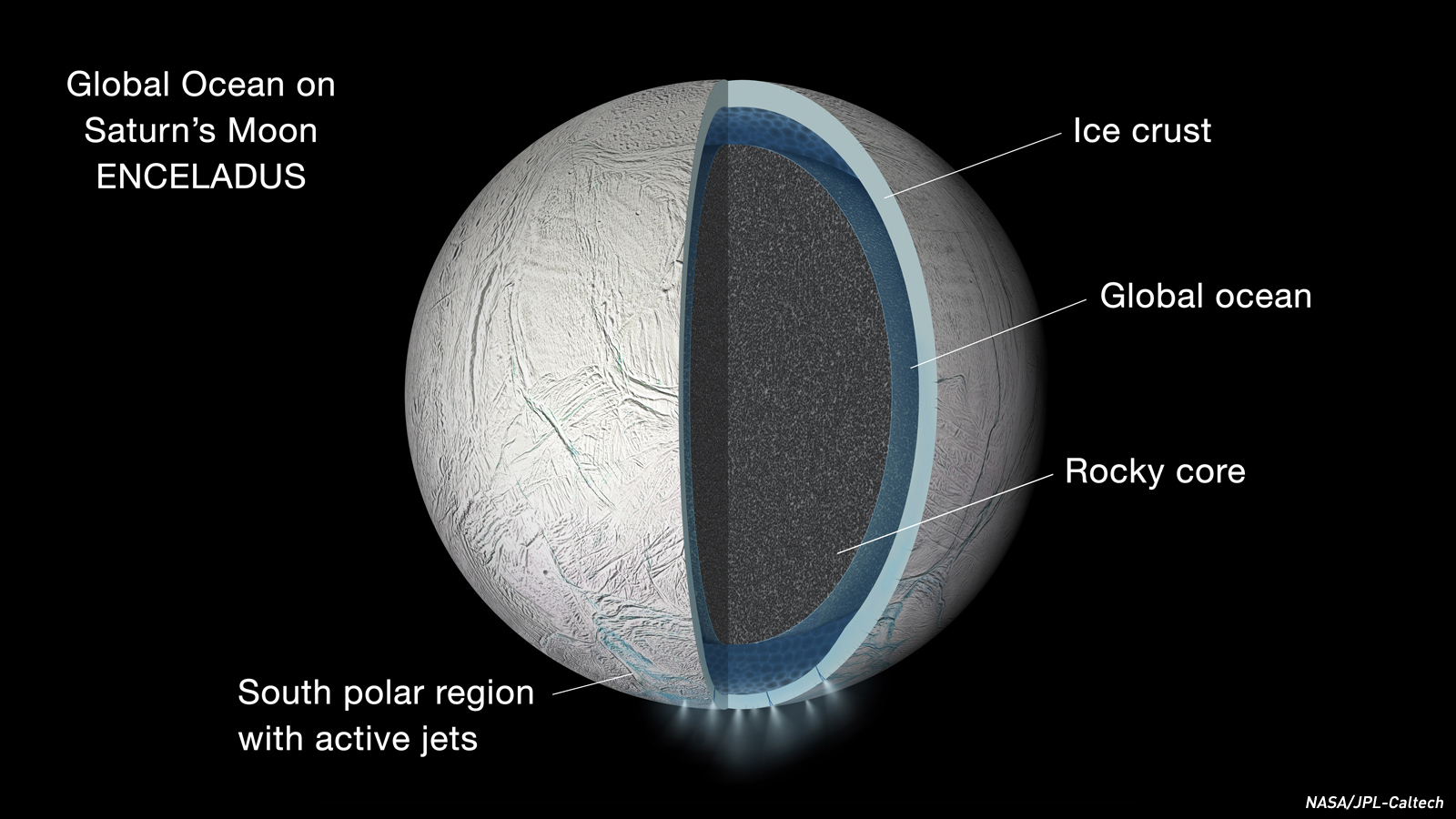 Wednesday, September 16, 2015, 11:25 AM - Enceladus hiding a global ocean under its icy crust, an accidental comet hunter collects its 3,000th score and Slooh reaches out to the One Year Mission. It's What's Up In Space!

Geysers erupting from Saturn's moon Enceladus have been pointing to the presence of liquid water beneath its surface, but the latest research now shows that there is likely a global ocean under the moon's icy crust.

Up until now, scientists have been seeing Enceladus - Saturn's sixth largest moon - like this: 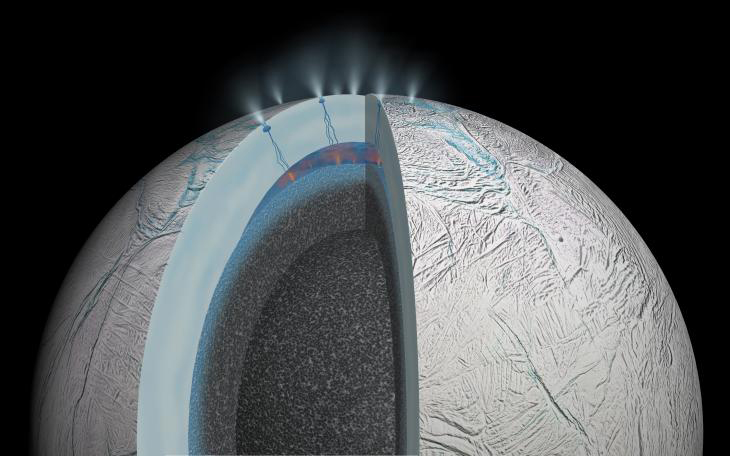 This artist's conception of Enceladus' southern hemisphere shows a thick ice crust covering a small liquid water sea under the pole - the source of saltwater geysers seen by NASA's Cassini. In this view, the thick crust is anchored to a rocky core farther away from the pole. Credit: NASA/JPL-Caltech

As of this week, with the release of a new study of how Enceladus' surface wobbles with time, this is the new view of what the inside of the moon probably looks like: 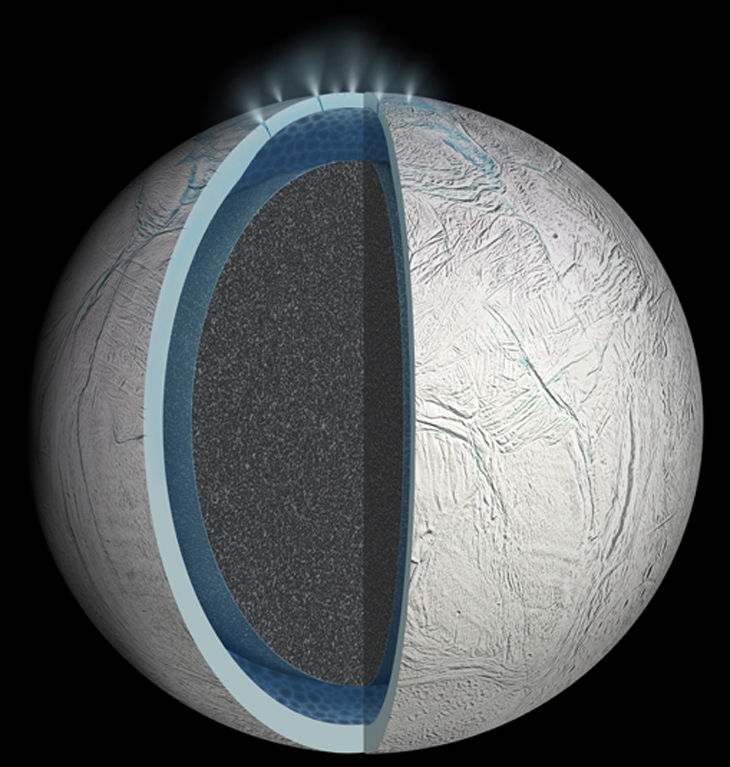 An ocean now wraps around the entire moon, separating the icy surface crust above from the rocky core below. Credit: NASA/JPL-Caltech

Cassini scientists analyzed more than seven years' worth of images of Enceladus taken by the spacecraft, which has been orbiting Saturn since mid-2004. They carefully mapped the positions of features on Enceladus -- mostly craters -- across hundreds of images, in order to measure changes in the moon's rotation with extreme precision.
As a result, they found Enceladus has a tiny, but measurable wobble as it orbits Saturn. Because the icy moon is not perfectly spherical -- and because it goes slightly faster and slower during different portions of its orbit around Saturn -- the giant planet subtly rocks Enceladus back and forth as it rotates.
The team plugged their measurement of the wobble, called a libration, into different models for how Enceladus might be arranged on the inside, including ones in which the moon was frozen from surface to core.
"If the surface and core were rigidly connected, the core would provide so much dead weight the wobble would be far smaller than we observe it to be," said Matthew Tiscareno, a Cassini participating scientist at the SETI Institute, Mountain View, California, and a co-author of the paper. "This proves that there must be a global layer of liquid separating the surface from the core."

NASA and the ESA's space weather satellite - the Solar and Heliospheric Observatory (SOHO) - which has been watching the Sun and its local environment for nearly 20 years, hit an incredible milestone this week.

WATCH BELOW: Karl Battams, a solar scientist at the Naval Research Laboratory in Washington, D.C., discusses SOHO's discoveries, and what makes this milestone so remarkable.

SOHO's mission is to observe the sun and interplanetary space, above Earth's atmosphere that blocks so much of the sun's radiation. From there, SOHO watches the solar disk itself and its surrounding environment, tracking the constant outward flow of particles known as the solar wind, as well as giant explosions of escaping gas called coronal mass ejections, or CMEs. In its two decades in orbit, SOHO has opened up a new era of solar observations, dramatically extending our understanding of the star we live with.
The telescope’s comet prowess, however, was unplanned and has turned out to be an unexpected benefit. With its clear view of the sun's surroundings, SOHO can easily spot a special kind of comet called a sungrazer, because of its close approach to the sun.
"SOHO has a view of about 12-and-a-half million miles beyond the sun," said Joe Gurman, mission scientist for SOHO at NASA's Goddard Space Flight Center in Greenbelt, Maryland. "So we expected it might from time to time see a bright comet near the sun. But nobody dreamed we'd approach 200 a year."

Slooh reaches out to the One Year Mission

NASA astronaut Scott Kelly and Russian cosmonau Mikhail Kornienko are now past the mid-point of their One Year Mission - the longest duration mission on the International Space Station so far.

On the night of Tuesday, September 15, the Slooh Community Observatory hosted a live show, featuring live HD views from the ISS, and commentary from Slooh host Will Gater and Slooh astronomer Bob Berman. Joining them during the show (embedded below) was Dr. John Charles, who is tracking Scott Kelly's condition and experiences during this long-duration mission, and astronaut Cady Coleman, who flew twice on the Space Shuttle Columbia, logging just over 180 days in space.

Back in March, astronaut Scott Kelly, and cosmonaut Mikhail Kornienko, launched from Russia, docked with the ISS, and began a year-long mission to understand how exactly an extended stay in space could affect or even damage the human body. The mission is a major step in plans for a manned mission to Mars, and will hopefully help NASA understand what kinds of equipment, training, and even foods would be needed to facilitate what’s likely to be a two and a half year trip.
Exploration and innovation have been a part of the human condition since mankind first discovered fire, and the exploration of space has captivated the imaginations of poets, storytellers, scientists and world leaders for centuries. We’ve spent the better part of five decades sending men and women into space, watching as they launched, celebrating their victories, and staring in awe at the images they’ve sent back. Now, for the first time, we can celebrate those discoveries as we look up to where real men and women spend their days and nights looking down on the world they left behind.