Expired News - 'Lonely Mountain' spotted on Ceres by NASA's Dawn spacecraft - The Weather Network
We use cookies on this site to improve your experience as explained in our Cookie Policy. You can reject cookies by changing your browser settings.   READ MORE I ACCEPT

Sunday, June 21, 2015, 10:03 AM - Move over, mysterious bright spots, Dawn just spotted an 18-km-wide 'Lonely Mountain' on Ceres, plus Summer Vacation for Martian robots and a lop-sided dust cloud around the Moon. It's What's Up In Space!

The "Lonely Mountain" of Ceres

The mysterious bright spots on Ceres have been getting a lot of attention, and rightfully so, however they aren't the only point of interest on the surface of this newly-explored dwarf planet.

Something sticks out in one of the most recent images released from NASA's Dawn mission - a natural pyramid-like formation the spacecraft captured on June 6, 2015 (to upper-right in the image below). 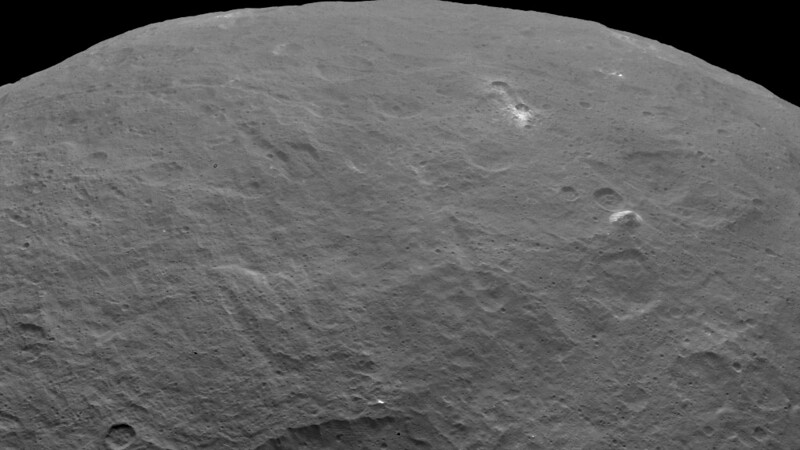 Taken from an altitude of 4,400 kilometres, as Dawn began to circle Ceres on its second mapping orbit, the pixels in this image are 140 metres on a side. At that scale, this mountain is 18 kilometres across! Taking a quick estimate of around 28 degrees for the angle of the left-hand slope, and figuring the peak to be around two-thirds of the way across the base, that puts the peak of this mountain at over 6,300 metres high! That's taller than any mountain in Canada!

Based on the images presented by Dawn so far, it seems that this is the only mountain on the surface, or at least the only one in that region of the dwarf planet's globe. Perhaps it should be named Erebor, after Tolkien's "Lonely Mountain" in The Hobbit, however formations on Ceres will apparently be named following two different schemes - gods and goddesses of agriculture and vegetation for craters and agricultural festivals from around the world for others.

Regardless, this formation - quite literally - stands out as yet another amazing feature scientists are already puzzling over on Ceres. As the mission continues, and Dawn draws closer to the surface - to 1,450 km for its High Altitude Mapping Orbit (HAMO) from Aug 6 - Oct 15 and then down to 375 km for its Low Altitude Mapping Orbit (LAMO) from Dec 8 to mission end - the images captured will provide more clues as to the origin of these formations, but will (no doubt) also reveal even more fascinating details about Ceres.

June 2015 is a fairly quiet month on Mars, as the various robotic missions on or orbiting the planet take a vacation, due to the planet slipping behind the Sun. 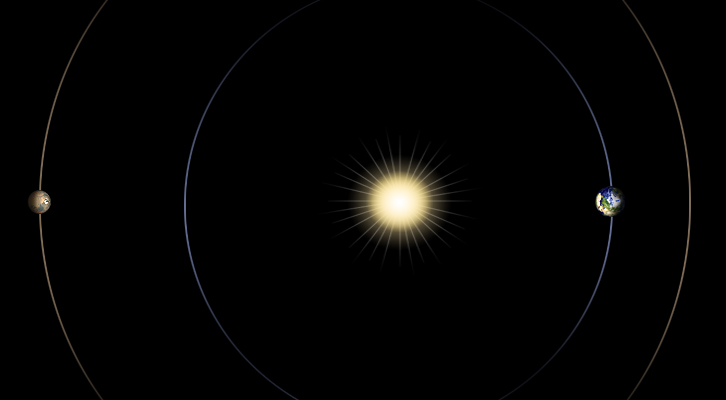 This is Mars Solar Conjunction month for NASA, the European Space Agency and the Indian Space Agency - all of whom have missions currently exploring the fourth planet from our Sun.

As they orbit the Sun, every 26 months or so Mars and Earth take up positions on opposite sides of the Sun from each other. Since the Sun and Mars are in roughly the same position in our observations of the sky, this is known as "conjunction" - similar to how Venus and Jupiter are nearing conjunction as we get closer to July 1. The last Mars Solar Conjunction was in April of 2013, the next one will be in late July of 2017 and this year it occurred on Sunday, June 14.

When this astronomical event takes place, for a period of a week before and a week after, communicating with spacecraft orbiting Mars, as well as rovers on its surface, gets a little dicey. Charged particles streaming off of the Sun can interfere with transmissions between Earth controllers and these robots, scrambling orders and leaving gaps in the data.

Rather than risk a bad set of commands that could result in a damaged rover or a de-orbited spacecraft, the mission teams put together a two-week batch of mission objectives that's sent over while communications can still be trusted, and then they pick things up once we're in the clear. The spacecraft are pretty much on their own for that two weeks, allowing the teams here on Earth to catch up on any backlogs or take a well-deserved vacation.

This down-time lasts from June 7 to June 21, and one of the very first operations conducted by the Mars Reconnaissance Orbiter - once communications are reestablished - will be to take pictures of the Martian surface with the help and guidance of students and faculty at Western University, in London, ON!

Our Moon is surrounded by a permanent, lopsided dust cloud

When NASA's LADEE mission - the Lunar Atmosphere and Dust Environment Explorer - slipped into orbit around the Moon, its aim was to solve a decades-old mystery about the lunar environment.

WATCH BELOW: Science@NASA describes the LADEE mission and its goals of sampling the tenuous lunar atmosphere and solving a mystery discovered by Apollo mission astronauts, over 40 years ago.

After launching in 2013 and orbiting the Moon for 128 days, the mission was proclaimed a success and the spacecraft was deorbited in April of 2014. Since then, scientists have been poring over the data collected and now it seems that the mystery is solved!

A team led by Professor Mihaly Horanyi, of the University of Colorado - Boulder, published research in the journal Nature this week that shows the moon is shrouded in a lopsided cloud of dust particles. According to the study, this cloud is composed of lunar dust, kicked up into space by the impacts of particles left behind by the passage of comets - the same micrometeoroids that strike Earth's atmosphere during meteor showers.

"A single dust particle from a comet striking the moon’s surface lofts thousands of smaller dust specks into the airless environment, and the lunar cloud is maintained by regular impacts from such particles," Horanyi said in a UC-Boulder press release.

According to the press release:

Many of the cometary dust particles impacting the lunar surface are traveling at thousands of miles per hour in a retrograde, or counterclockwise orbit around the sun -- the opposite orbital direction of the solar system’s planets. This causes high-speed, near head-on collisions with the dust particles and the moon’s leading surface as the Earth-moon system travel together around the sun, said Horanyi.
The Geminid meteor showers occur each December when Earth plows through a cloud of debris from an oddball object called Phaethon, which some astronomers describe as a cross between an asteroid and a comet. “When these ‘beams’ we see from meteors at night hit the moon at the right time and place, we see the cloud density above the moon skyrocket for a few days,” said Horanyi.

"Identifying this permanent dust cloud engulfing the moon was a nice gift from this mission," said Horanyi. "We can carry these findings over to studies of other airless planetary objects like the moons of other planets and asteroids."

In addition, Horanyi said that other practical applications of knowing the location and extent of this cloud includes protecting spacecraft and astronauts from high-speed impacts from the dust particles.