Expired News - March 5 asteroid Earth-flyby: exactly how close will it get? - The Weather Network
We use cookies on this site to improve your experience as explained in our Cookie Policy. You can reject cookies by changing your browser settings.   READ MORE I ACCEPT

News
Editor's Choice
A summer scorcher ahead? Canada's July forecast, here
OUT OF THIS WORLD | What's Up In Space - a weekly look at the biggest news coming down to Earth from space

March 5 asteroid Earth-flyby: exactly how close will it get? 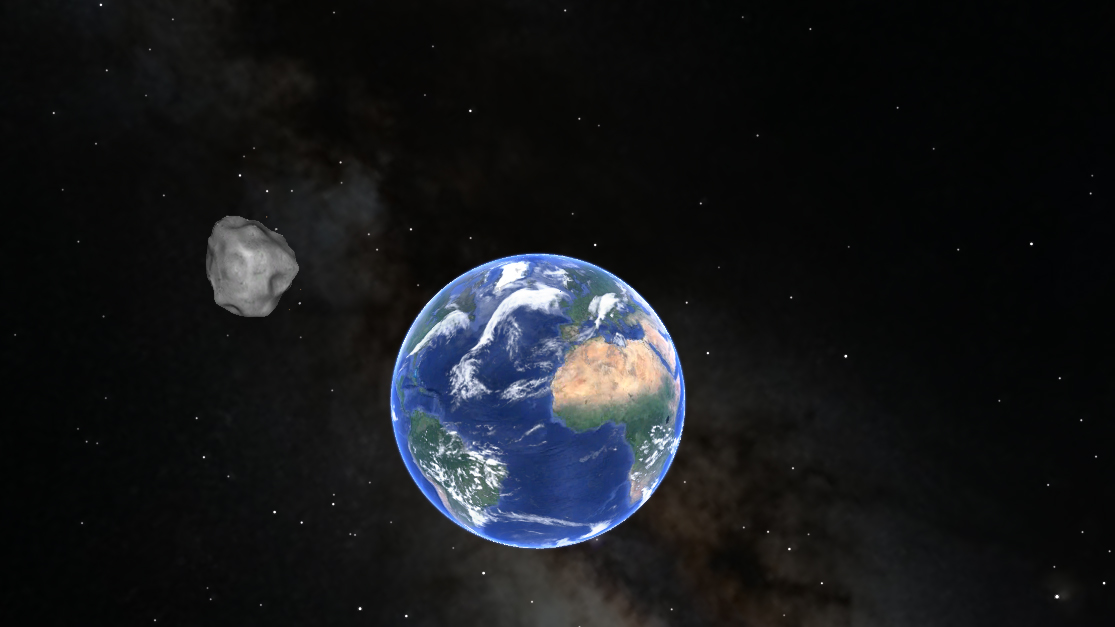 This simulation shows what the view might look like from a hypothetical spacecraft following very closely behind asteroid 2013 TX68 as it zips by Earth in the distance. On March 5, 2016, this small, 30-metre space rock will pass somewhere between 17,300,000 km and 31,000 km from our planet. Credit: NASA/Google/S. Sutherland

Friday, February 12, 2016, 8:03 AM - Apparently not close enough to hit, but just how close will a small asteroid come to us in March? Plus, NASA's plan to launch a lunar flashlight into space, and is there "less than meets the eye" in Saturn's rings? It's What's Up In Space!

A close pass, but just HOW close?

Sometime around midday on March 5, 2016, a roughly 30-metre wide asteroid named 2013 TX68 is going to be flying past the Earth. Although astronomers are confident that this encounter will not result in an impact, there's still enough uncertainty in its trajectory that they're not quite sure exactly how close it's going to get to us.

The "cloud" of dots extending outward from the Earth show the numerous possible trajectories of asteroid 2013 TX68 as it flies by. The image now depicts the revised distances to this asteroid. Credit: NASA/JPL-Caltech/S. Sutherland

With such uncertainty, how do they know that it won't hit Earth? Even with several of the asteroid's possible trajectories actually overlapping Earth's orbit, all of the trajectories have it at least 17,000 km above the Earth during flyby.

According to NASA's Jet Propulsion Laboratory:

Scientists at NASA's Center for NEO Studies (CNEOS) at the Jet Propulsion Laboratory in Pasadena, California, have determined there is no possibility that this object could impact Earth during the flyby next month. But they have identified an extremely remote chance that this small asteroid could impact on Sep. 28, 2017, with odds of no more than 1-in-250-million. Flybys in 2046 and 2097 have an even lower probability of impact.
"The possibilities of collision on any of the three future flyby dates are far too small to be of any real concern," said Paul Chodas, manager of CNEOS. "I fully expect any future observations to reduce the probability even more."
Asteroid 2013 TX68 is estimated to be about 100 feet (30 meters) in diameter. By comparison, the asteroid that broke up in the atmosphere over Chelyabinsk, Russia, three years ago was approximately 65 feet (20 meters) wide. If an asteroid the size of 2013 TX68 were to enter Earth's atmosphere, it would likely produce an air burst with about twice the energy of the Chelyabinsk event.

Update: As of February 11, 2016, a revised orbital solution for this asteroid by NASA JPL has pushed its closest approach in March further from Earth - with a minimum distance of 31,000 km and a maximum distance of 17,300,000 km.

Additionally, this new solution allowed NASA to rule out the Sept 2017 encounter, and completely removed 2013 TX68 from their list of potentially hazardous asteroids that have any chance of impacting with Earth. This March 2016 encounter now represents the very closest that 2013 TX68 will come to Earth for at least the next 100 years. Observations of the asteroid as it passes will refine these results even further.

When NASA launches their most powerful rocket since the 1970s - the Space Launch System, or SLS, slated to launch in 2018 - it will carry an uncrewed Orion capsule into space, along with a group of mini-satellites which will piggyback along for the ride.

One such mission, named the Lunar Flashlight, will shine a spotlight down onto the Moon's surface, to search dark polar craters for mineral resources.

NASA’s Advanced Exploration Systems Division recently selected the Lunar Flashlight CubeSat as a secondary payload to fly aboard the Space Launch System’s Exploration Mission-1 (EM-1) flight. Lunar Flashlight, led by a team from the Jet Propulsion Laboratory and Marshall Space Flight Center, will map the lunar south pole for volatiles and demonstrate several technological firsts, including being the first CubeSat to reach the moon, the first planetary CubeSat mission to use green propulsion, and the first mission to use lasers to look for water ice.

Scheduled to launch along with it are six other cubesats. Three lunar mission, Skyfire, Lunar Icecube and LunaH-Map, will scout out inaccessible and hard-to-observe regions of the moon's surface for resources. Near-Earth Asteroid Scout, or NEA Scout, will make a reconnaissance flight over an asteroid, snapping pictures of it and its general location in space. BioSentinel payload of yeast will help scientists understand the impacts of deep space radiation on living organisms. CuSP, a "space weather station," will monitor Earth's magnetic field and the solar and cosmic particles that interact with it, as a test for a potential network of such monitors in near Earth space. 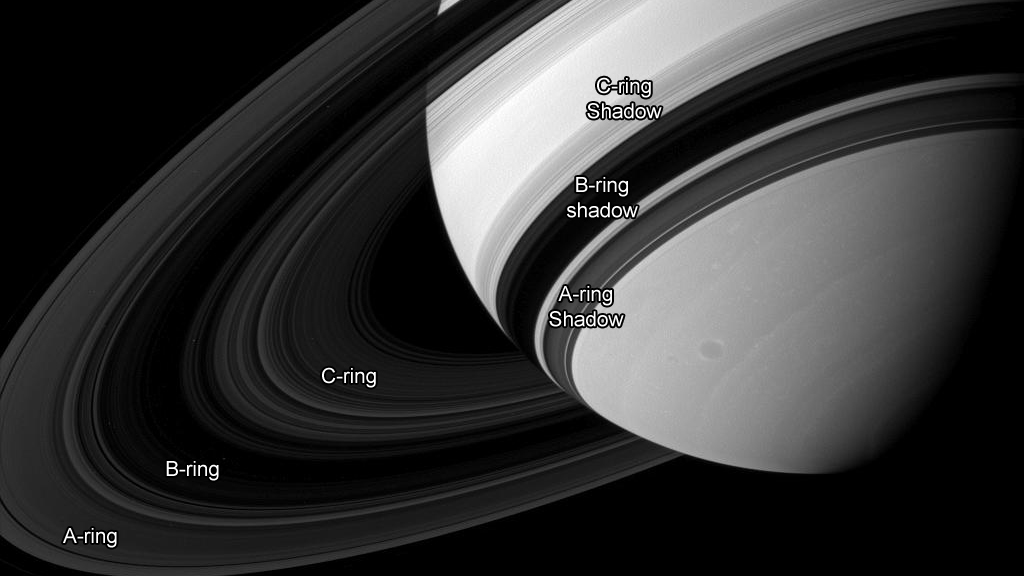 This image from the Cassini spacecraft shows not just Saturn's rings, but also their shadow on the planet's upper-level clouds. Credit: NASA/JPL-Caltech/Space Science Institute. Annotations by S. Sutherland

Take a close look at the image above, and it's easy to see why scientists would expect Saturn's B ring - the center section of the main ring system - to be the one with the most stuff in it. Optically, it's the brightest section, but as its shadow on Saturn shows, it also blocks the most light of the three sections.

However, researchers examining data from the Cassini orbiter have found something surprising.

The scientists found that, while the opacity of the B ring varied by a large amount across its width, the mass – or amount of material – did not vary much from place to place. They "weighed" the nearly opaque center of the B ring for the first time - technically, they determined its mass density in several places - by analyzing spiral density waves. These are fine-scale ring features created by gravity tugging on ring particles from Saturn's moons, and the planet's own gravity. The structure of each wave depends directly on the amount of mass in the part of the rings where the wave is located.

"At present it's far from clear how regions with the same amount of material can have such different opacities," said lead author Matthew Hedman, a Cassini participating scientist at the University of Idaho, Moscow, according to a JPL news release. "It could be something associated with the size or density of individual particles, or it could have something to do with the structure of the rings."

NASA says that scientists should have a better idea of the mass of Saturn's rings after Cassini takes measurements of the planet during orbits in 2017. With previous measurements by Cassini that determined the total mass of Saturn and its rings, the new data returned in 2017 will give researchers a missing piece of the puzzle for determining how the rings formed and why they have their very curious structure.

"By 'weighing' the core of the B ring for the first time, this study makes a meaningful step in our quest to piece together the age and origin of Saturn's rings," Cassini project scientist Linda Spilker said in the JPL news release. "The rings are so magnificent and awe-inspiring, it's impossible for us to resist the mystery of how they came to be."