Expired News - What's Up in Space: Comet Catalina previews a bright future - The Weather Network
We use cookies on this site to improve your experience as explained in our Cookie Policy. You can reject cookies by changing your browser settings.   READ MORE I ACCEPT

What's Up in Space: Comet Catalina previews a bright future

Wednesday, August 19, 2015, 3:02 PM - A celestial wanderer gives us a preview of a potentially bright future, a violent origin for one of Saturn's rings and The Martian visits NASA's Jet Propulsion Laboratory. It's What's Up In Space!

A first-time visitor to the solar system is getting closer to its one-and-only swing by the inner planets, and even though it's still farther away from the Sun than the planet Mars, it is already showing up beautifully in telescopes.

The image above, now NASA's Astronomy Picture of the Day for August 18, 2015, was snapped by astrophotographer Ian Sharp, at the Siding Spring Observatory in Australia.

Spotted on October 31, 2013, by astronomers with the Catalina Sky Survey, it was originally thought to be an usual asteroid - quite large (estimated at 20 km wide) and on a very long orbit around the Sun. It was assigned the provisional name 2013 US10 and was watched closely in the nights that followed, to narrow down its orbit.

Within six days of observations, Don Yeomans and Paul Chodas, of NASA's Near-Earth Object Program Office, at the Jet Propulsion Laboratory realized that it was, in fact, a comet, and redesignated it C/2013 US10 (Catalina).

Subsequently, they found that it's not just a long-period comet, but is on a million-year journey through the solar system after being nudged out of the Oort cloud by some ancient encounter, and this will actually be its very first (and likely only) swing through the inner solar system.

According to the comet catalogue maintained by Seiichi Yoshida, C/2013 US10 (Catalina) appears to be on track to become visible with the naked eye by mid-November. Images of the comet showing up from astrophotographers should become better as time goes on, and as it will cross over into the northern sky by mid-December, it could be an excellent comet to check out from one of the many Dark Sky preserves across Canada.

Saturn has been famous for its rings since the days of Galileo, but perhaps the most fascinating one in its collection is the wispy, "knotted" F ring, located just outside of the planet's main rings. So thin that it was only discovered in 1979, when the Pioneer 11 spacecraft flew past the planet, the F ring is shepherded into place by the gravity of two tiny moons, named Pandora and Prometheus, and now it seems that a violent interaction between these two in the distant past may be the actual source of the ring. 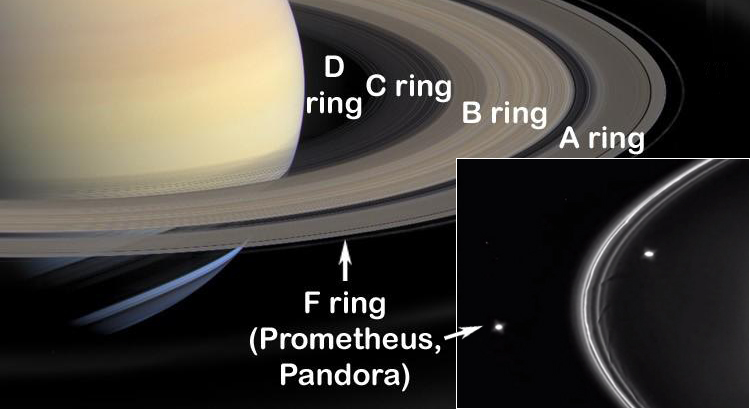 Two researchers from the Department of Planetology at Japan's Kobe University - Ryuki Hyodo and Keiji Ohtuski - ran computer simulations depicting the processes going on around a ringed planet like Saturn, to see how this Pandora/Prometheus/F-ring system could develop.

Based on their study, published in Nature Geoscience this week, the F ring could have been formed by an impact between Pandora and Prometheus, if the two were "rubble pile" moons - solid, dense cores surrounded by a mantle of loosely collected icy particles. An ancient collision would have caused their mantles to be thrown off, leaving behind the dense cores of the moons we see today, with the icy particles stretched out by their gravity into the ring.

The story of Mark Watney, the main character of the science fiction novel The Martian, will be coming to the big screen on October 2, 2015, and earlier this week, author Andy Weir, film star Matt Damon and director Ridley Scott arrived at NASA's Jet Propulsion Laboratory to meet with the people who gathered much of the science and technical data that went into both the novel and the film.

While there, they toured the facility and visited the "Mars Yard" - a portion of the laboratory campus dedicated to recreating environments encountered by the Mars rovers, to assist the teams in maneuvering the robots around obstacles and in planning the best access to targets they are investigating on Mars. 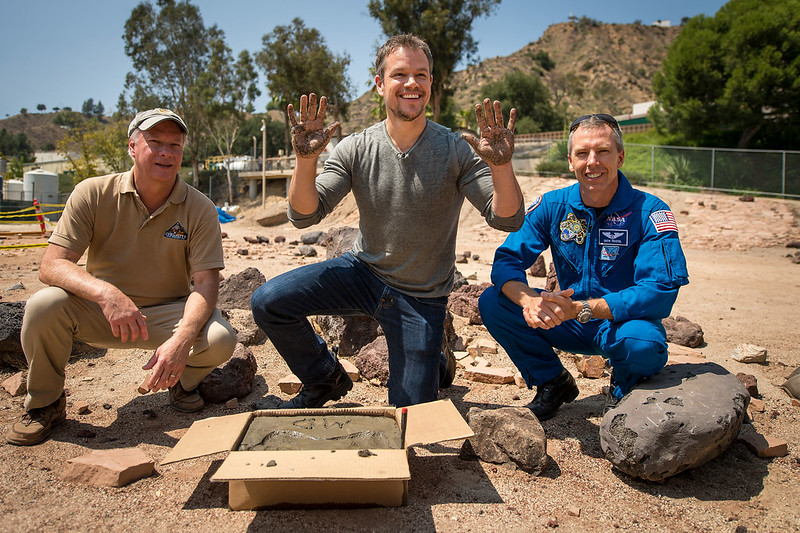 Afterward, Weir, Damon and Scott joined NASA astronaut Drew Feustel and Jim Green, Director of the Planetary Science Division at NASA Headquarters, at the Jet Propulsion Laboratory, to answer questions about the movie and about NASA's "Journey to Mars" plan.

WATCH BELOW: Highlights from this Q&A session, including what people find so compelling about this story, and how closely science fiction can come sometimes to science reality.

During a manned mission to Mars, Astronaut Mark Watney (Matt Damon) is presumed dead after a fierce storm and left behind by his crew. But Watney has survived and finds himself stranded and alone on the hostile planet. With only meager supplies, he must draw upon his ingenuity, wit and spirit to subsist and find a way to signal to Earth that he is alive. Millions of miles away, NASA and a team of international scientists work tirelessly to bring “the Martian” home, while his crewmates concurrently plot a daring, if not impossible rescue mission. As these stories of incredible bravery unfold, the world comes together to root for Watney’s safe return.