Expired News - Sea level rise could put the Internet underwater, says study - The Weather Network
We use cookies on this site to improve your experience as explained in our Cookie Policy. You can reject cookies by changing your browser settings.   READ MORE I ACCEPT

Wednesday, July 18, 2018, 9:36 AM - Sea level rise puts the Internet at risk, carbon emissions and the global heat wave, American belief in climate change is at an all-time high, and living in green spaces slows cognitive decline in the elderly. It’s What’s Up in Climate Change.

Turning your device on and off again won’t help fix this issue, but preventing sea level rise will.

Forget calling tech support or restarting your computer - when sea level rise floods the Internet’s infrastructure, it will have to be rebuilt from scratch. Increasing temperatures and glacier melt are contributing to the threat that thousands of miles of Internet infrastructure along the United States coastlines will be flooded in as soon as 15 years, according to a new study.

The researchers state that when the Internet was built over 30 years ago, very little of the infrastructure was designed to be functional underwater and climate change was not considered during its construction. The infrastructure includes underground fiber optic cables, data centers, traffic exchanges, and termination centers that are mostly buried and parallel coastlines and highways. Over 6,400 kilometres of buried fiber optic conduit is located in regions that could be flooded from sea level rise by 2033, and over 1,100 traffic hubs could be engulfed by the ocean. The findings indicate that the infrastructure located in New York, Seattle, and Miami are the most at-risk and the networks of CenturyLink, Inteliquent, and AT&T will be the most affected.

A flood in the streets of Miami, Florida. Credit: Wikimedia Commons

The study notes that effectiveness of mitigation efforts, such as building seawalls to protect the infrastructure, are hard to estimate because sea level rise is extremely difficult to manage. The study’s senior author, Paul Barford, asserts that this risk is a wake-up call for both industry and government to begin considering how the risk to Internet infrastructure can be minimized as the climate changes.

July's global heat wave - more like this expected in the future

During the first weeks of July people all over the world experienced unusually high temperatures and persistent high-pressure domes and the heat was inescapable - the hottest temperature ever reliably recorded in Africa reached a scorching 51.3 degrees Celsius in Ouargla, Algeria, and it was so hot in New Jersey that it took 8 microseconds longer to transmit information in the New York Stock Exchange data center. While weather extremes are a natural occurrence, the globe collectively noticed atypical temperature highs, and some of the heat records broken last week include:

• Baku, Azerbaijan - An all-time record high of 43 degrees Celsius was recorded on July 1, which promoted high use of air-conditioning that a hydroelectric power plant exploded and caused the worst power outage the country has seen since the collapse of the Soviet Union in 1991.

• Quebec, Canada - An all-time record high of 36.6 degrees Celsius was recorded on July 2, this is the highest temperature ever recorded since Montreal began keeping temperature records 147 years ago, and 74 deaths in the province have been linked to the heat wave.

• Yerevan, Armenia - An all-time high record of 42 degrees Celsius was recorded on July 2.

• Tbilisi, Georgia - An all-time high record of 40.5 degrees Celsius was recorded on July 4.

• Tianxiang, Taiwan - An all-time high record of 40.3 degrees Celsius was recorded on July 9.

Climate change will increase the frequency and severity of heat waves and according to a study in Nature, by the late 2020s the accumulation of greenhouse gases will overtake natural variability as the main cause of heat waves western regions of the United States, in the Great Lakes region by the middle of the 2030s, and in the northern and southern Plains by 2050 and 2070. The link between carbon emissions and extreme heat are becoming clearer, and in an interview with the National Oceanic and Atmospheric Administration (NOAA), meteorologist Hosmay Lopez states that "without human activity, half of the heat waves that are projected to occur in the future wouldn't happen."

This survey was conducted in April and May of this year and is the fifth straight survey where at least 70 per cent of Americans think there is evidence for the changing climate. During the time of the survey the U.S. and many other countries around the world were experiencing particularly hot weather, and NOAA reported in June that the month of May in 2018 was the fourth warmest May on record. 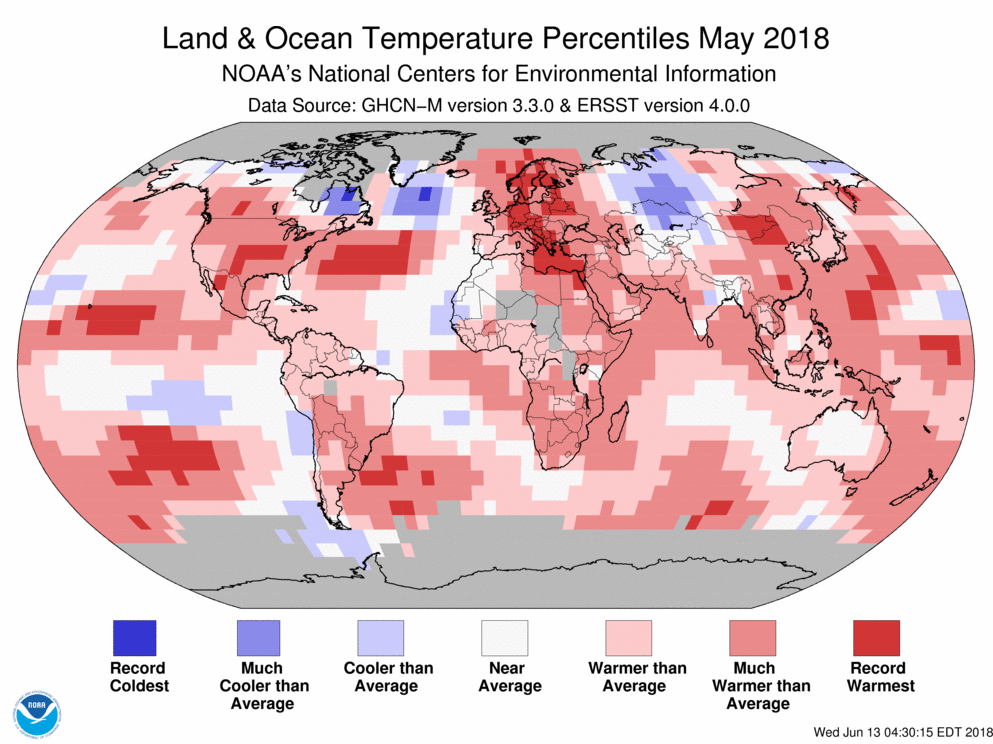 The public's perceptions about climate change can be influenced by various factors, such as the economy and opinions of political leaders. Even the daily weather can change an individual's opinion towards climate change - in a study from the University of New Hampshire, survey participants that did not identify themselves with any political party tended to agree with the scientific consensus that climate change has been caused by human activity on unseasonably warm days, and did not agree on unseasonably cool days.

A new study conducted by the Barcelona Institute for Global Health indicates that contact with green space not only improves mental health, but also could play a positive role in slowing cognitive decline in the elderly.

The global population is rapidly aging and health care systems will have to adapt to the changing needs of societies, such as accommodating specific needs of the elderly, which include declines in physical and mental capacities. The World Health Organization expects that the proportion of people over the age of 60 years will nearly double from 12 per cent to 22 per cent between 2015 and 2050, with many people moving into urbanized cities and having less contact with nature.

The researchers studied 6,500 people aged 45 to 68 living in the United Kingdom for 10 years and used satellite imagery to calculate how green their neighbourhoods are. Cognitive tests were completed three times during the course of the study to assess verbal and mathematical reason, verbal fluency, and short-term memory, and found that a decline in cognitive score was 4.6 per cent slower in participants living in greener neighbourhoods.

The researchers reason that greener neighbourhoods slow cognitive decline by fostering social cohesion and support, reducing stress, promoting higher levels of physical activity, and having lower levels of noise and air pollution. Increasing rates of urbanization could accelerate cognitive decline in older adults, and the findings of this study could provide evidence that people will benefit from implementing green projects and infrastructure in cities by improving quality of life for the elderly and reducing costs and stress among health care providers, friends, and family members.