Expired News - Climate change increases strength of El Niño/La Niña, study - The Weather Network
We use cookies on this site to improve your experience as explained in our Cookie Policy. You can reject cookies by changing your browser settings.   READ MORE I ACCEPT

THE LINK BETWEEN RISING TEMPERATURES AND EL NIÑO/LA NIÑA

This summer was a season of scorching wildfires burning across the world - Greece and Sweden experienced unusually active wildfire seasons and both California and British Columbia experienced their worst wildfire seasons on record. Arson, fire management strategies, and lightning all contribute to wildfires, and many climate experts note that the average increase in temperatures over time has impacted the intensity of fires and area burned. A new study expands on climate change's impact on wildfires and reports that human-released greenhouse gases intensify El Niño and La Niña events that can drive regional temperature extremes and wildfire frequency.

The study projected future climate conditions assuming that greenhouse gas emissions will continue on a business-as-usual pathway without any drastic political intervention. Regional climates to sea surface temperature anomalies that were affected by El Niño/La Niña were evaluated from a baseline period of 1920-1980 to current and future years to investigate how much current trends diverge from historic data. All of the climate simulations from the years 2040-2100 indicated that human-induced climate change produced increased El Niño/La Niña teleconnection (a linkage between weather changes occurring in widely separated regions) strength over many land regions and drove inter-annual variability in regional temperature extremes.

This means that future El Niño and La Niña events, such as droughts, wildfire frequencies, and disease outbreaks of certain magnitudes will have bigger impacts because of the sensitivity that land temperature and precipitation have to changes in tropical Pacific Ocean temperatures, which are increasing due to rising greenhouse gas emissions. This also indicated that regions that are prone to wildfires or droughts will likely see an intensification of these conditions during El Niño and La Niña years. Many lessons were learned by the international community during the particularly strong 1997-1998 El Niño event that was fuelled by unusually warm Pacific Ocean waters and caused global flooding, depletion of crops and food reserves, displacement of communities, and cost between $32-96 billion USD.

The influence climate change has on El Niño and La Niña is highly complex and difficult to model because of the timescale of historical records and extensive related factors, like the climate's internal variability. While more research is needed to expand our knowledge about El Niño and climate change, the findings here suggest an increased probability of enhanced future extremes, impacts, and related risks in a warming climate due to changes in some of the Earth's largest weather patterns in addition to the unprecedented emissions of greenhouse gases.

Monitoring disease transmission is one of many critical tasks that livestock farmers take to ensure the health of their animals, but increasingly unpredictable climate conditions is making this more difficult. In addition to the heat stress and drought negatively affecting livestock, a new study shows that the warming temperatures are increasing the prevalence of parasites that particularly affect sheep and cattle, which can cause a loss of productivity worth over $3 billion globally.

Warmer temperatures and varying moisture levels can increase the presence of viruses that never occurred in a region before because they are closely linked to weather and environmental conditions - such as the changing global distribution of malaria. To battle the unpredictability of climate change and spread of disease, a new tool has been developed for farmers to better predict the prevalence of the common liver fluke parasite (Fasciola hepatica) by monitoring key environmental drivers, such as soil moisture, which allows them to choose which pastures livestock should graze on and assess future infection levels based on climate conditions.

The prevalence of this parasite, which typically first infects mud snails, has increased from 48 to 72 per cent in UK dairy herds over the past few decades. As global meat consumption increases worldwide this study demonstrates the importance of using models to better protect livestock from parasites, instead of having to overly rely on expensive medicine to treat infections. The researchers note this particular urgency of farmers needing to reduce their reliance on medications for livestock, since worsening climate conditions and growing drug resistance in animals and humans will make treatment more challenging.

CLIMATE CHANGE IS MAKING INSECTS EAT MORE OF OUR FOOD

Warmer temperatures are favourable for the rapid growth of many different types of insects. With this insect increase comes a greater food requirement, and these populations will likely target the food that we are growing for ourselves. Losses of staple crops that over 4 billion people in the world rely upon, including rice, wheat, and corn, could increase between 10 to 25 per cent for each one degree Celsius increase in temperature because insect activity will increase with it, according to a new study.

Both the metabolic and reproductive rates of insects are boosted by higher temperatures, which results in more insects seeking out more food. The world produces enough food that could sufficiently feed the entire global population, but food waste, feeding crops to livestock, and economic inequality all contribute to nearly 800 million people that are currently hungry. The changes in yield from the major crops would account for 42 per cent of direct calories consumed globally, which will dramatically worsen the current hunger crisis.

The impact on crops will differ based on their own unique regions - wheat is typically grown in cool climate, which means that there will be higher survival rates over the winters and large population increase in the growing season, whereas rice is grown in relatively warm regions where the insect growth rate is not project to increase as quickly.

The simulations showed that crop yield declines caused by pests will be the largest in some of the world's most productive agricultural areas including France, the United States, and China, where most of the world's corn is grown. The study notes that agricultural practices are already shifting because of climate change, including earlier planting dates, different planting locations, and cultivar use. To battle the increasing challenges from insect farmers will likely have to implement new strategies including greater pesticide use, which could come at the cost of human and environmental health.

Our waste problem would seem a lot less problematic if we had a variety of easy and accessible options for disposing of plastic. Scientists are working on optimizing how to not only safely dispose of plastic without harming the environment, but giving that waste a useful purpose. A new study explores how certain blends of biodegradable plastics could not only be decomposed at home, but the resultant product could be converted into a biogas that could replace other polluting sources of energy.

Biodegradable plastics are a positive step towards reducing waste, but there has been limited research on their end-of-life management and how they impact the environment when they are disposed of. The study investigates how blending one of the world's best-selling biodegradable plastics, polylactic acid (PLA), with polycaprolactone (PCL) creates a material that is durable, easily decomposable at home, and can be a source of biofuel that could provide power. 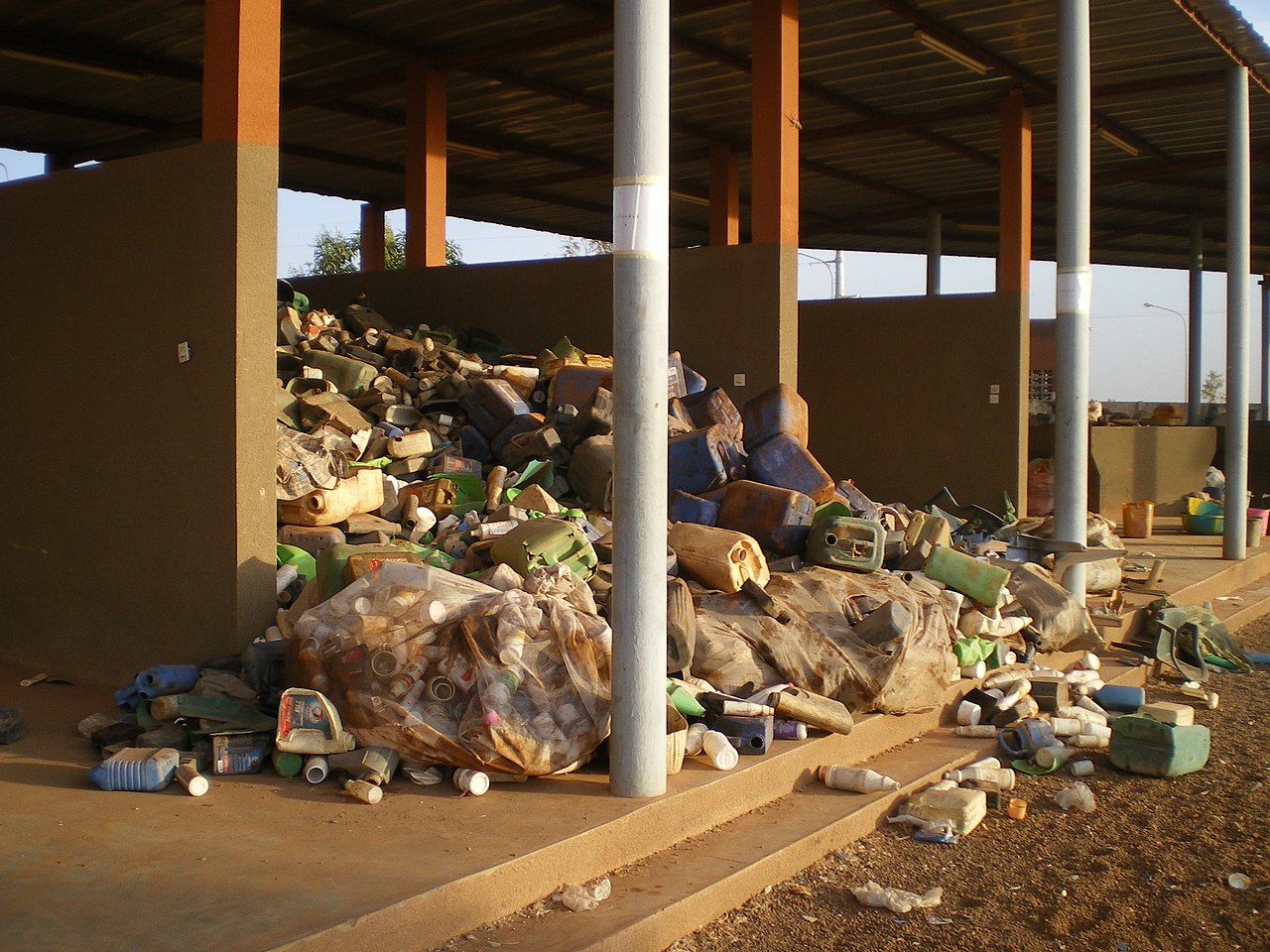 Current methods for collecting and recycling plastics do not efficiently reuse these materials to create energy. Credit: Wikimedia Commons

The blend of PLA and PCL is ideal because when it is composted at home it turns into carbon dioxide, biomass, and water after two years of composting at 25 degrees Celsius. The simplicity of these final products makes managing waste significantly more simple and purposeful. The researchers note that these biodegradable materials have a high potential for releasing methane, and emphasize that biodegradable plastics should be sorted into the appropriate organic stream in municipal solid waste collections.

Despite the management challenges, biodegradable plastics and their subsequent bioenergy could play a significant role in the future energy sector, and the study states that as much as 80 per cent of the total United States energy demand in 2050 could be supplied by renewable energy technologies.

WATCH BELOW: 100-year-old skydiver proves age is just a number