News
Editor's Choice
Car rust is as bad as you think, but here's what you can do
OUT OF THIS WORLD | Earth, Space And The Stuff In Between - a daily journey through weather, space and science with meteorologist/science writer Scott Sutherland

According to the new world atlas of artificial night sky brightness, released in 2016, less than one per cent of Canadians regularly experience the former - seeing the skies completely free of competing sources of light. So, based on this new atlas, what are the rest of us losing out on and why? 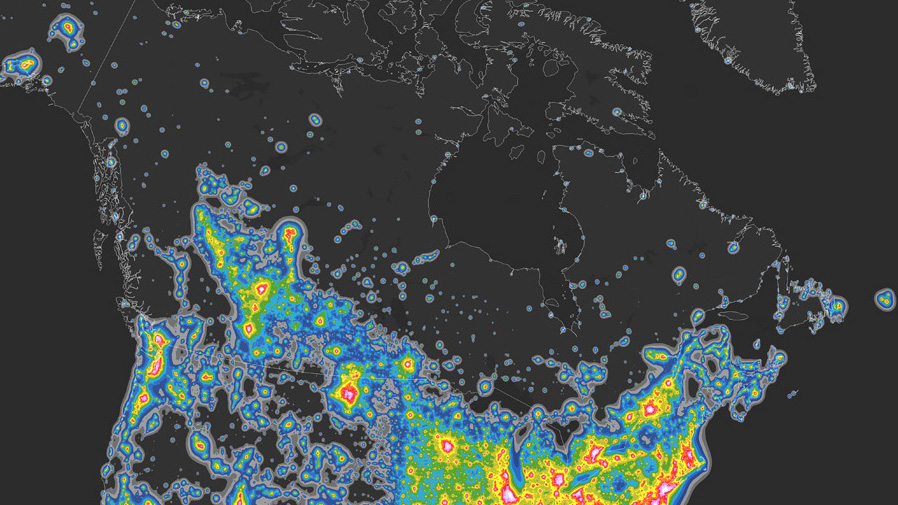 As shown in the video above, light pollution in the core of a large to moderately sized urban centre can completely wash out the night sky, but as one gets progressively further from these light sources, the view improves greatly.

From glare to sky glow

Not the source, but the spillover

Some lights probably could be turned off. Drive down the streets and highways at night and there are many buildings with business signs that are still lit, even though everyone is gone home until the next day. While this is likely seen as a form of indirect advertising, turning these off - at least later at night until morning, when most people are asleep - could have a noticeable effect for light pollution. Reducing the number of lights left on overnight in office buildings would help as well.

Since the misdirected light - the portion that radiates off to the sides and upward - is the bigger, more pervasive issue here, however, we simply need better designs for our outdoor light fixtures. Street lights could be fitted with hoods that direct the light mostly downward, eliminating the spillover shining upward and reducing the amount of light reflected from the ground. Even billboards and electronic signs could be angled or structured to shine much of their light downward instead of straight out to the side.

Changing the types of lights we use can help as well, as long as we carefully consider all the impacts. LEDs - light emitting diodes - are gaining popularity and are coming down in price. These are quite desirable for their energy-saving qualities, however if we use the wrong kind of LEDs, we can actually make the problem of light pollution worse.

The best LEDs to use, to ensure that we can reduce light pollution and regain at least part of the night sky, are ones that are lower temperature, thus minimizing the amount of blue light, since that is the wavelength most efficiently scattered by the atmosphere.

What can we do about this?

The Royal Astronomical Society of Canada has an entire portion of their website devoted to light pollution abatement. Primarily, the ways that we can all help with this is to make the right choices when illuminating our own homes and property, to make elected officials aware of the problem and the potential solutions, and to ensure that these solutions are given proper consideration by urban planning committees. The simple fact that most methods of light pollution abatement are actually quite cost effective - using less energy for more light and/or focusing illumination to allow for lower wattage sources - may be enough to bring these methods into the spotlight.