Expired News - What is La Niña? And why is it disrupting our winter - The Weather Network
We use cookies on this site to improve your experience as explained in our Cookie Policy. You can reject cookies by changing your browser settings.   READ MORE I ACCEPT

News
Editor's Choice
Canada's 2022 Winter Forecast, here
NASA JPL presents an animation of the 2010-2011 La Nina, showing anomalies in sea surface temperature and sea surface height over time.
OUT OF THIS WORLD | Earth, Space And The Stuff In Between - a daily journey through weather, space and science with meteorologist/science writer Scott Sutherland

What is La Niña? And why is it disrupting our winter

Friday, November 18, 2016, 3:13 PM - La Niña - the cold phase of the El Niño Southern Oscillation (ENSO) - has a strong influence on the world's weather, just like its "warm phase" counterpart.

As influential as El Niño can be on the world's weather, one can only last so long, due to a built-in limiting factor.

When equatorial Kelvin waves, which support the growth of and sustain an El Niño, deliver their payload of heat eastward across the Pacific Ocean, they hit the South American coast and are reflected back towards the west. These waves, known as Rossby waves, travel along the thermocline and at the surface to the north and south of the equator. Taking roughly six months to traverse the ocean, these Rossby waves reach the coastlines of southeast Asia and are reflected again, back towards the east. 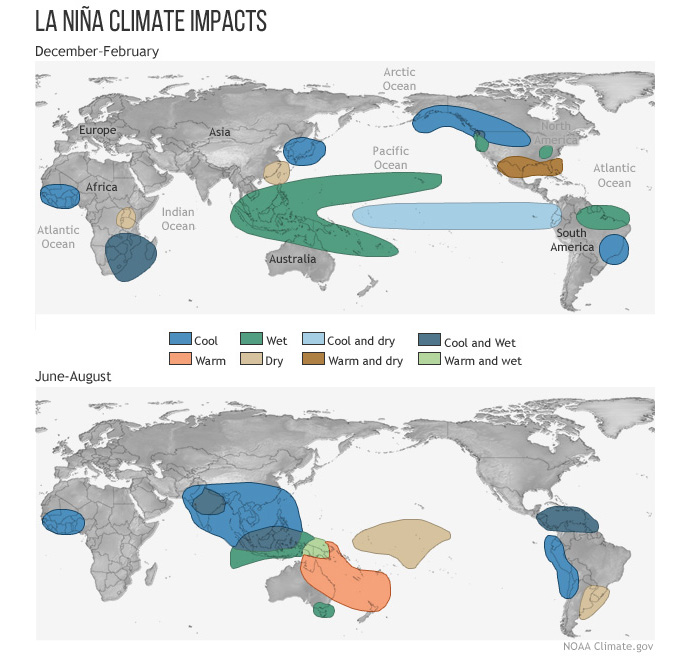 Back to: What is El Niño?