Expired News - See these rare weather phenomena, shown on new stamps - The Weather Network
We use cookies on this site to improve your experience as explained in our Cookie Policy. You can reject cookies by changing your browser settings.   READ MORE I ACCEPT

Friday, June 19, 2015, 5:59 AM - Send a double rainbow to a beloved relative? Deliver a lightning bolt to someone less-than-beloved?

You’ll soon be able to do both, figuratively, thanks to a new series of Canada Post stamps that showcase the country’s wide and spectacular range of weather. In addition to the lightning and double rainbow, there are stamps that show ocean fog, hoarfrost and a sun dog.

The photo of a sun dog, a rare occurrence unseen by most Canadians, was discovered here on theweathernetwork.com among these images submitted by our audience. 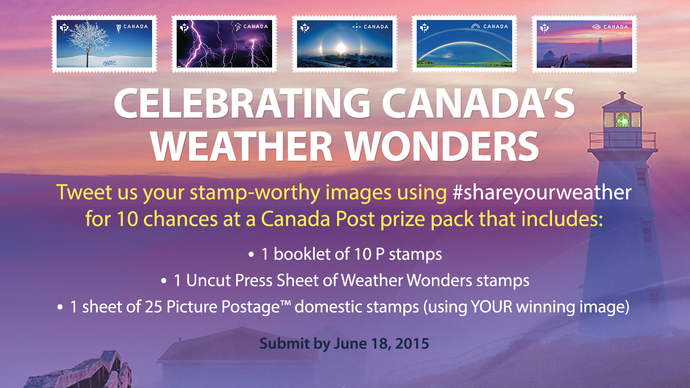 "The images captured in weather wonders illustrate the natural beauty that can be seen across our country," said Lisa Raitt, the federal Minister of Transport who's responsible for Canada Post.

Stamp designer Kosta Tsetsekas and his colleagues had to sift through thousands of images to narrow it to the five that will grace envelopes and stamp collections starting later this month.

“It was really finding the image that told the story and at the same time worked well as a group,” he said. “That was the challenge.”

The new stamps mark the 175th anniversary of weather observations in Canada, beginning in 1840 first at Toronto’s Fort York and then at King’s College in Halifax.

As nice as the finished products look, Tsetsekas said he just designed the stamps. “The photographers did it, they deserve the credit,” he said. “These are beautiful images.”

Here’s how each image came to be one of the stamps, available here at Canada Post's online store and in postal outlets. Frank Reardon spotted this sun dog during the noon hour on December 3, 2012, a few weeks before the shortest day of the year.

“The sun was just peaking across the horizon,” he said. “That’s about as high as the sun gets during the day, and around lunchtime I took the photo.”

He braced himself against the wind and well-below-zero temperatures to get the shot with a 14mm fisheye lens, and quickly submitted it to The Weather Network.

“If you look closely at the photo, you can see a second set of rainbows, very faint,” he said. “It’s very unusual to see the second circle. This always tells that it’s really windy ... the ice crystals are blown across.”

Sun dogs are a pair of bright spots that flank the sun, visible when the light refracts through airborne ice crystals. They are more likely to be viewed at higher latitudes on cold days.

Stamp designer Kosta Tsetsekas said he wasn’t aware of the phenomenon before the stamp project, and Reardon’s panorama of Iqaluit sprawled beneath the sun dog clinched its spot.

“We wanted it set in a community,” he said, “without it having the landscape compare too much with the effect we’re trying to present.”

Mike Grandmaison was driving through Northern Quebec near Lac-Saint-Jean a few years ago when stormy weather delivered an unbelievable opportunity: A near-perfect double rainbow.

“In those kind of situations, you’re always a little edgy, because you want to make sure you get it,” said Grandmaison, a freelance photographer based in Winnipeg. “You don’t always have time to compose the beautiful photo, so you’re always looking for a foreground.”

This time, Grandmaison lucked out, with woods and wetlands to make a perfect foreground for the sunny shot as the rain still fell where he stood.

Rainbows are seen when internal light reflections in individual raindrops are refracted as they move between air and water, when the sun hits them while it is still raining. The sun’s rays need to be behind the viewer in order to see one. To see two rainbows, the light needs to be reflected twice, in which case the colours are seen reversed.

The stamp design team had plenty of double rainbows to choose from, but needed one with just the right combination of sky and land, settling on Grandmaison’s shot.

“It was more a pastoral kind of landscape,” designer Kosta Tsetsekas said, “and it really allowed the rainbow to be the hero. I think that was the key here.” St. John’s resident Geoffrey Whiteway has plenty of spare time in the summer break from teaching at Memorial University’s Fisheries and Marine Institute, so he often heads out in the early mornings to take photos.

The vista above greeted the photography enthusiast in July of 2011, at Cape Spear, 20 minutes from his home.

“I got out there and it was foggy,” he said. “I picked up a cup of tea at Tim Hortons so I decided to stay. Took a walk up to the lighthouse, sat down and relaxed. It kind of unfolded from there.”

Fog is low-lying cloud, made up of countless water droplets or ice crystals suspended in the air. It usually draws its moisture from wet ground, the ocean or other nearby water bodies.

Atlantic Canada’s lighthouses are numerous and iconic, and the one at Cape Spear helped cement this shot’s place on the stamp.

“This one won because of the colour, and just the subtlety of the lighthouse and the buildings as they appear out of the fog,” stamp designer Kosta Tsetsekas said. “It just seemed to have that last little bit that brought it in as the winner.” Dave Reede took this crackling photo on the Trans-Canada Highway east of Winnipeg in the midst of an exceptionally stormy week more than 10 years ago, when he would often go out driving at night to see what he and his camera would nab.

“This particular night was just crazy. There was just so much cloud to ground lighting everywhere, violent storms,” said Reede, whose career combines photography and teaching high school math and science. “I’ve never seen anything like it since.”

Lightning strikes when static electricity is discharged, either between differently charged parts of the cloud, or between the cloud and the ground. Differences in conductivity can sometimes cause bolts to fork, as in Reede’s picture.

Canada gets an estimated 2.34 million lightning flashes per year, and strikes kill on average 10 Canadians annually. They are also responsible for igniting more than 4,000 forest fires in the country each year.

As common as they are, stamp designer Kosta Tsetsekas said he had plenty of shots from which to choose. Reede’s image made the cut not only for what it depicted, but also for how it worked as part of the group.

“We wanted to have a bit of a range of tone happening in the stamps, so they weren’t all warm tones, or on the blue side or green side,” he said. “Having the lightning come right off just below ‘Canada’ [on the stamp] was really a fortunate accident. We kind of looked for little things like that, but overall, it’s just a really strong shot.” This shot of icy winter stillness is the work of photographer Daryl Benson, who often travels from Edmonton’s cityscape into the countryside when he thinks there’s some cool weather phenomenon to shoot.

It had had been bitterly cold overnight when he snapped the image of this tree.

“Everything, everywhere you looked, all the trees were just caked in that hoarfrost,” he said. “I bet you it was -40C in that area. It was cool and crisp and still.”

Hoarfrost happens when the objects it forms on are at or below freezing, and colder than the surrounding air. That causes water vapour to form ice crystals on such surfaces, without going through a liquid dew stage in between.

It’s a hard phenomenon to represent visually, stamp designer Kosta Tsetsekas said, and he wasn’t satisfied with close-up shots. Benson’s tree, coated in the frost, gave it the look of an ice sculpture.

“That’s kind of what sold it for us,” Tsetsekas said. “That kind of feels unreal in many ways. It almost feels like one of those plastic Christmas trees.”