Expired News - It's December 1! Welcome to meteorological winter! - The Weather Network
We use cookies on this site to improve your experience as explained in our Cookie Policy. You can reject cookies by changing your browser settings.   READ MORE I ACCEPT

News
Some count December 1 as the first day of winter. Why? It's science!
OUT OF THIS WORLD | Earth, Space And The Stuff In Between - a daily journey through weather, space and science with meteorologist/science writer Scott Sutherland

It's December 1! Welcome to meteorological winter!

Thursday, December 1, 2016, 10:37 AM - According to the calendar, the First Day of Winter isn't until December 21, yet for meteorologists and climatologists today - December 1 - is the start of Meteorological Winter. Here's why.

The way that we typically track the seasons is by their astronomical definitions. No matter whether you're in the northern or southern hemisphere, Spring starts on the day of the Vernal Equinox, when our tilted Earth is just in the right spot in its orbit that the Sun appears to cross the equator, headed towards being higher in the daily sky. In the north this is in late March, while in the south, it's in late September. The Summer Solstice is when the Sun reaches its peak height in the sky, in late June in the north and late December in the south. The Autumnal Equinox is the exact opposite of the Vernal Equinox, as the sun appears to cross the equator, and is headed towards being lower in our daily skies, and the Winter Solstice is when the Sun reaches its lowest height in the sky and the cycle repeats.

However, while that works for us in the astronomical sense, it doesn't necessarily work with our weather and climate. To better account for how temperatures change throughout the year, atmospheric scientists set their 'seasonal calendar' a bit differently.

Does it make that much of a difference?

When it comes to keeping climate records, it does, especially if you want consistency (and we do!). Astronomical seasons can last anywhere from 88 to 94 days (depending on the year and what time-zone you live in). So, rather than having to account for that difference in length when you're comparing seasonal averages, each meteorological season has the same length as the previous year's, and they're much closer in length to each other throughout the year as well. Meteorological springs and summers are 92 days long, autumns are 91 days long and winters are 90 days long (or 91 every four years, due to the Leap Year). Reverse all of that for the southern hemisphere, but they're just as regular.

An even better way? 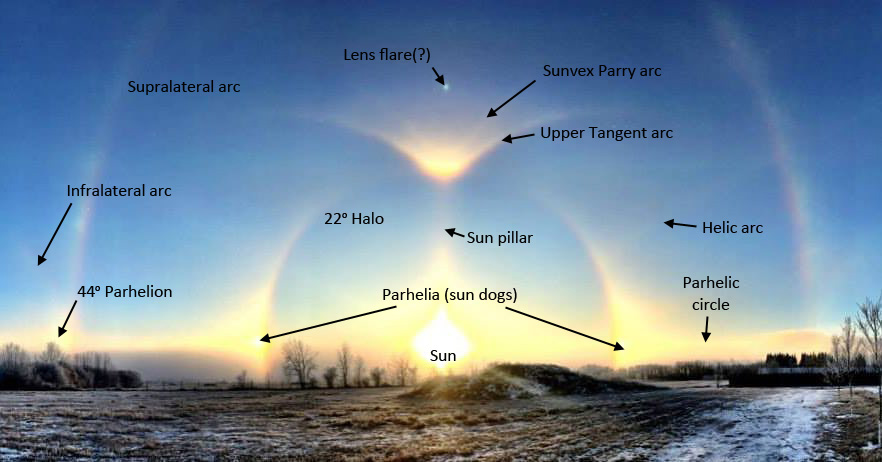 Captured by Johann Brown, from Edmonton, this picture shows a variety of atmospheric optical phenomena surrounding the Sun.

These circles, arcs and splotches of light around the Sun are caused by sunlight shining through tiny, naturally-occurring ice crystals (sometimes called "diamond dust") floating in the upper atmosphere. As the sunlight refracts through these transparent crystals and reflects off their surfaces, it is bent and arched into these amazing shapes.

Watch Below: Question Of The Week - Most Memorable Winter Storm?