Expired News - Billions of viruses fall from the sky every day: study - The Weather Network
We use cookies on this site to improve your experience as explained in our Cookie Policy. You can reject cookies by changing your browser settings.   READ MORE I ACCEPT

News
Editor's Choice
Car rust is as bad as you think, but here's what you can do
OUT OF THIS WORLD | Earth, Space and Everything In-Between - a daily journey through weather, space and science with meteorologist/science writer Scott Sutherland

Billions of viruses fall from the sky every day: study

Monday, February 12, 2018, 2:29 PM - Swept up high above the ground, billions of viruses are travelling far distances on the winds, even being transported between continents, to fall down on us every day.

The idea that viruses can be transmitted far distances is not new. We most often hear about how they travel via animals, however, and by humans as we move about the planet. According to a new study, published in the International Society for Microbial Ecology Journal, there is another way that viruses travel around the world, and it's high above our heads.

"Roughly 20 years ago we began finding genetically similar viruses occurring in very different environments around the globe," Curtis Suttle, a University of British Columbia virologist who co-authored the study, told UBC News. "This preponderance of long-residence viruses travelling the atmosphere likely explains why - it's quite conceivable to have a virus swept up into the atmosphere on one continent and deposited on another."

Nearly all of Earth's weather happens in lowest level of the atmosphere, known as the 'troposphere', and the troposphere itself is divided into two main parts. The part that starts at the ground and reaches upwards to the base of the clouds is called the 'planetary boundary layer', and it is the part that sees the greatest direct influence from the ground, due to friction with the surface. Particles in the air in this level typically get caught up in convection and do not travel very far from their source. The part of the troposphere above the PBL, known as the 'free atmosphere', is mostly free of friction from the ground, and thus, it is where the winds can transport particles, such as dust and smoke, over far distances. 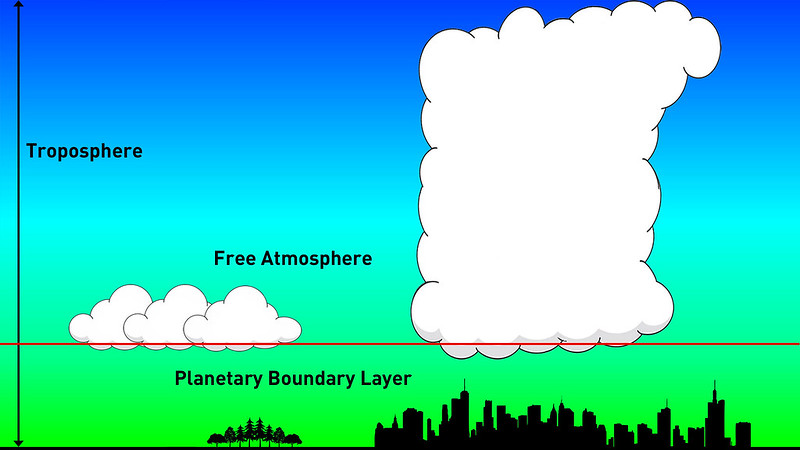 This diagram illustrates the separation between the Planetary Boundary Layer (PBL) and the Free Atmosphere. Credit: Scott Sutherland

Placing a group of special collection stations high up in Spain's Sierra Nevada Mountains - at heights above 2,500 to 3,000 metres above sea level, and thus above the planetary boundary layer - they found an abundance of viruses in their daily samples.

"Every day, more than 800 million viruses are deposited per square metre above the planetary boundary layer," Suttle said, according to UBC News. "That's 25 viruses for each person in Canada."

In fact, during their study, the team found that from over 800 million up to nearly 7 billion viruses were collected, per square metre, every day. At the same time, tens of millions of bacteria per square metre per day were collected, as well. The lower number of bacteria seen above the PBL is likely due to their tendency to be larger than viruses, and thus to stick to larger particles, which do not travel as far before settling back to Earth.

Where do these viruses and bacteria come from? Typically, they're lofted on the winds by hitching a ride on dust particles, or from sea spray.

How do they return to Earth after being transported?

"Bacteria and viruses are typically deposited back to Earth via rain events and Saharan dust intrusions," Reche told UBC News.

Also, the researchers note that these viruses falling down to Earth from the sky is not necessarily a bad thing.

While some viruses are certainly a concern for human health, many more are completely harmless to us, and have beneificial impacts on Earth's ecosystem, such as by breaking down harmful algal blooms. More generally, these transported viruses preserve biological diversity by providing a seed bank, which can help the environment to more readily adapt to changes.

Watch Below: Dangerous cold with -60 wind chills for parts of Canada