Expired News - Park Board bans captive whales at Vancouver Aquarium - The Weather Network
We use cookies on this site to improve your experience as explained in our Cookie Policy. You can reject cookies by changing your browser settings.   READ MORE I ACCEPT

News
Editor's Choice
Canada's Winter Forecast: Your next 3 months of weather!
The real reason for the deaths of beluga whales at Vancouver Aquarium and why the CEO wants the whales to stay.
Canadian News | British Columbia

Tuesday, March 21, 2017, 4:58 PM - The Vancouver Park Board recently voted to prohibit the capture and display of whales and dolphins at the Vancouver Aquarium – just weeks after the aquarium announced the controversial return of their cetacean program. But the decision may not bode well for the whales in the end, critics of the ban say.

“The timing and execution of the proposed amendment isn’t yet known, but a ban on displaying all cetaceans at the Vancouver Aquarium will have a deep impact on the research we do and devastate our marine mammal rescue centre,” Dr. John Nightingale, CEO and president of the Vancouver Aquarium Marine Science Centre, said in a statement. "We have operated one of the world’s best aquariums in Stanley Park for 60 years, are recognized leaders in marine mammal research and have the fourth largest marine mammal rescue centre in the world. This decision will diminish all of that."

The Park Board's decision was the "will of the Vancouverites" according to Sarah Kirby-Yung, a former spokesperson for the aquarium and a commissioner for the board. Kirby-Yung told The Globe and Mail that the decision followed two nights of impassioned hearings and thousands of submissions from the public.

“Our job is to listen to the public,” Kirby-Yung told The Globe. “This is an issue where public sentiment has been changing and, progressively, people have been feeling more and more uncomfortable.”

The emotional response was reportedly a reaction to the deaths of two beluga whales at the aquarium in late 2016. Despite a widespread and thorough investigation, no cause of death had been determined; however, the aquarium’s probe did determine that the most likely cause of death was a toxin.

”In the new exhibit are entirely new life supports and water filtration systems. And it’s set much further away from the exterior perimeter of the building, with better security,” Nightingale said. “So we’ve taken a lot of steps to try and counteract what we now believe the potential cause of death was.” 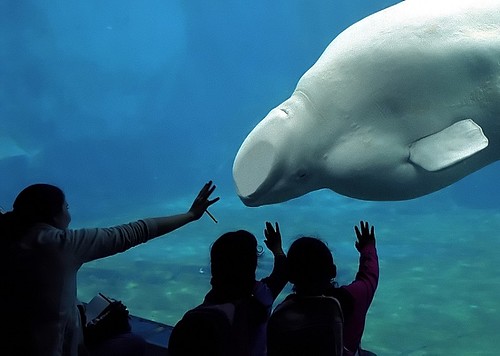 The aquarium intended to display the belugas until 2029, when its lease with the Vancouver Park Board expires. But the Board’s decision to amend park bylaws could impact this timeline altogether.

In a post-Blackfish world, there isn't much wiggle room when discussing the ethics of captivity. But Nightingale says there are many unexpected ways in which the aquarium’s captive whales help with wildlife conservation by way of scientific research.

Tilikum, an orca whale, performing at a SeaWorld Park. Blackfish, a documentary released in 2013, chronicled Tilikum's life in captivity, highlighting three trainers killed by the whale. The documentary gave a voice to the heated debate on capturing wild whales for marine shows and aquarium displays. Credit: Wikimedia Commons.

“The belugas here at the aquarium are the only ones available to any researchers in Canada that are trained, and there are simply some kinds of research that you can’t do by jumping out of a boat on top of a wild whale. You need whales that are trained to participate,” Nightingale says.

He uses the example of hearing.

“So if you go to a doctor for a hearing test they give you a little button, and they say ‘when you hear the tone in your earphones push the button.’ And the doctor can assess your hearing. To assess hearing in belugas, you need to do the same thing, you need to train them to wave their flipper when they hear the tone,” Nightingale explains. “So everything we know about hearing in belugas pretty much has come from this aquarium.” Nightingale says that once the dialogue starts flowing, the public and scientists can better understand more complex situations – like the beluga population depletion in the St. Lawrence. The belugas in the river have diminished from a historic 10,000 or 12,000 down to 800.

The 'right' whale for the job

The Vancouver Aquarium ended its display of killer whales in 2001, opting for belugas as the "display species" instead. The decision, Nightingale says, was based on two reasons: Firstly, the significant role of the beluga in Canada's Arctic marine environment, and second, the species' adaptability.

"[T]hey’re much more ideally suited to living in an aquarium because if visitors look at a beluga they have great big bodies with lots of blubber – they’re sort of sumo wrestlers of the whale world," Nightingale told The Weather Network."[With] little dinky tails, they spend most of their life just put-putting around, except when they need to migrate a bit in the fall to get south of where it’s going to freeze solid. So they’re not a fast-swimming, long-distance swimming whale like a killer whale is, and we made that purposeful choice based on our ability to provide a great quality of life and quality of care."

But does this mean the beluga is the right whale for research purposes?

Some marine biologists argue that despite the similar life-expectancy of a whale in captivity versus a whale in the wild, the overall quality of life differs greatly in an aquarium.

"No matter how big your aquaria are, how well set up it is, it's still significantly different than their natural setting," Dave Duffus, professor at the Whale Research Lab at the University of Victoria," told CBC News. "It causes lots of problems."

With regard to health, Duffus adds that captive whales and dolphins more often experience issues with their teeth, digestion, and behaviour as oppose to whales in the wild.

Future for the whales

According to Nightingale, the end goal for the aquarium was to wrap up the beluga research program by 2029 and brace for an "orderly transition."

The ban presents a new uncertainty for the captive whales -- which can no longer return to the wild -- about their future location and their accessibility to researchers in Canada.

On the previously proposed research plan, Nightingale says: "[It] included a thoughtful transition for a future without beluga whales, it would have allowed the aquarium to continue to provide a home for rescued and non-releasable animals, and it included an expanded cetacean research program with cetaceans at the aquarium and in the wild. All of that is now in jeopardy."