Expired News - Understanding tornadoes: 5 questions answered - The Weather Network
We use cookies on this site to improve your experience as explained in our Cookie Policy. You can reject cookies by changing your browser settings.   READ MORE I ACCEPT

Tuesday, August 7, 2018, 1:10 PM - Editor’s note: Tornado season in North America typically starts in the Southeast in March and April, then moves north and west into the Plains states in May and June. We asked Penn State meteorology professors Paul Markowski and Yvette Richardson to explain why tornadoes form, how to stay safe if you’re near one and whether climate change is affecting tornado patterns.

WHERE ARE TORNADOES MOST LIKELY TO OCCUR?

Most headline-making tornadoes are spawned by what are known as supercell thunderstorms. These are large, intense storms characterized by an updraft (rising air) that rotates.

Thunderstorms develop when warm, humid air near the surface lies beneath a thick layer of air in which the temperature decreases rapidly with height. We call this type of atmosphere “unstable,” meaning that when air is nudged upward, the water vapor that it contains condenses. This releases heat, making the air warmer than its surroundings. The air becomes buoyant and rises, creating the towering clouds we associate with thunderstorms.

Tornadoes are especially likely to be spawned by supercell thunderstorms when the lowest altitudes are particularly humid and possess exceptionally strong wind shear. These conditions are more likely to come together in certain locations, such as the U.S. Great Plains and Southeast.

HOW DO ACTUAL TORNADOES FORM?

Not all supercell thunderstorms produce tornadoes. Once wind shear has created a rotating updraft in our supercell thunderstorm, other processes develop rotation near the ground, in the cool air underneath the storm, which we call its “cold pool.” The cold pool is produced mostly by the evaporation of rain.

Within and beneath the storm, warm air is rising and cooler air is descending. As air descends and flows through the cold pool, the horizontal differences in temperature and acceleration of air along the ground combine to produce more horizontal spin. If there is strong upward suction from the overlying rotating updraft of the supercell storm, and the air in the cold pool is not too cold, the horizontally spinning air can be tipped toward the vertical and sucked upward. It also can be contracted inward and spin faster, just as skaters increase the speed of their spins by pulling in their arms. This forms the tornado.

In the past decade, forecasters have become skillful at identifying conditions that can support strong tornadoes – those rated EF2 or higher on the Enhanced Fujita Scale. The National Weather Service’s Storm Prediction Center routinely predicts large outbreaks days in advance. “High-risk” outlooks capture most major tornado events, and strong tornadoes rarely occur outside of tornado watches. We have less ability to forecast tornadoes in more marginal situations, such as within non-supercell storms.

Even if the environment is extremely favorable for supercell tornadoes, forecasters have limited ability to say when or if a specific storm will produce a tornado. Researchers are studying triggers for tornado production, such as small-scale downdraft surges and descending precipitation shafts on a supercell storm’s rear flank, and processes that sustain tornadoes once they form.

We don’t understand tornado maintenance well, or how tornadoes might be affected by interactions with obstacles such as terrain and buildings. This means that when a tornado is occurring, forecasters have limited ability to tell the public how long they expect it to last.

WHAT SHOULD I DO DURING A TORNADO WARNING?

Basements, storm cellars or “safe rooms” that meet federal guidelines provide excellent protection. If none of these is available, the best strategy is to go to the lowest floor of a sturdy building and put as many walls between you and the tornado as possible. In other words, shelter in an interior room, such as a closet or bathroom. Also, make sure you are wearing good shoes. If your area takes a direct hit, you do not want to walk through a debris field barefoot.

Don’t chase tornadoes without professional training. Observations from spotters are valuable to forecasters who are issuing warnings, but they can be made from a distance. We don’t need people driving in harm’s way to know that a dangerous storm is approaching. 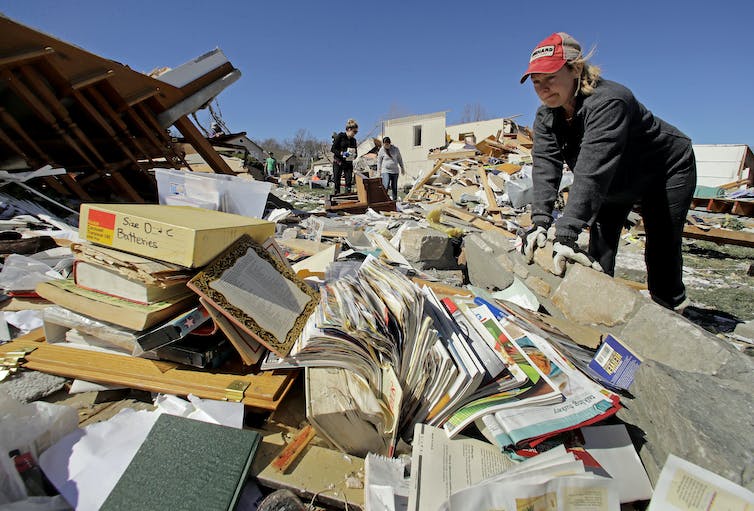 Brenda Johnson salvages items from her home that was destroyed by a tornado Tuesday, March 7, 2017, after a severe storm passed through Oak Grove, Missouri  AP Photo/Charlie Riedel

It’s hard to say. Reliable U.S. records of tornadoes go back only to roughly 1950, and records outside of the United States are even less complete. Thanks to storm chasing and the spread of camera phones, more tornadoes are counted today compared with yesteryear, but that does not necessarily mean that more are occurring. And there’s a lot of natural variability from year to year. Over the past decade, the annual U.S. tornado count has ranged from 886 to 1,690 storms per year.

Estimates of wind speeds based on post-storm damage surveys can be off by 50 percent or more. And many tornadoes in remote areas leave no clues as to how strong their winds were.

Most climate models predict that there will be more days per year when the atmosphere would have sufficient instability and wind shear to support tornadoes. But we need to be careful in interpreting this result. Climate models don’t capture tornadoes, their parent thunderstorms or nuances in the lowest level of the atmosphere that affect tornado formation. So it is hard to say whether there will be more tornadoes, even if tornado-supporting environments become more common.

This article was originally published on The Conversation in May 2017. Read the original article.