Expired News - Giant alien craft lurking near the Sun? Don't count on it - The Weather Network
We use cookies on this site to improve your experience as explained in our Cookie Policy. You can reject cookies by changing your browser settings.   READ MORE I ACCEPT

Giant alien craft lurking near the Sun? Don't count on it

Monday, July 27, 2015, 3:06 PM - Is a massive alien ship hovering close to our Sun, perhaps draining energy from our parent star for its own use? UFO hunters say yes, but upon closer inspection their story doesn't stand up to the light of day.

Youtube UFO hunter Streetcap1 has apparently found something interesting "lurking" near the Sun.

By Streetcap1's reckoning, a tiny smudge of light in the field of view of the Solar and Heliospheric Observatory (SOHO) - NASA's and the ESA's joint sunwatching satellite - comes across as something big and powerful.

According to Streetcap1, "This object has structure and for NASA to dismiss it as nothing is an insult to people's intelligence. If they post data then they must expect ufohunters to find anomalies and share them."

Three images from SOHO's LASCO C2 instrument, from 03:36 to 04:00 UTC, Wednesday, July 15, 2015, showing coronal streamers radiating away from the Sun. The Sun is blocked out by a small occulter disk, to allow the instrument to detect the fainter light from these streamers. Circled region shows the location of this "object." There is a 12 minute delay between LASCO C2 images, as the satellite cycles through taking images with its other instruments. Credit: NASA/ESA/SOHO

Closeup of the "object" in question, showing various other features of the image. Credit: NASA/ESA/SOHO

"This UFO is awesome! Every time I try to ask NASA about these UFOs on Twitter, they ignore me. They have never answered be and refuse to talk about these giant UFOs near our sun. These craft sometimes are even moon size. This one look like its about the size of Idaho, yet does the NASA care? I will try to send a message to them again on Twitter today. Lets see if they respond?"

However, as the composite image above shows, this "object" was only present for one frame of SOHO's imagery, during at least the 19 seconds it took for the 03:48 UTC (11:48 p.m. ET, July 14) to be gathered. It appears in neither the image before that nor after.

So, what was this "object?"

If something was actually there, it would be massive. With the Sun measured at around 1 million kilometres across, each pixel in the original SOHO image is roughly 6,100 kilometres on a size. If the "object" indeed fills 13 pixels from end to end, (if it is about the same distance as the Sun), it would measure nearly 80,000 kilometres across. Even if the "object" fills but one pixel, which is stretched out due to the 19-second exposure time for LASCO images, that's still nearly half the size of Earth!

Of course, if the "object" were closer to the detector, something smaller would fill the same number of pixels, and really, that is what we're looking at here. It's just something far, far smaller than Streetcap1 or the other UFO hunters might realize.

What this object is, most likely, is a cosmic ray particle.

Tiny energetic particles are streaming away from the Sun on a near constant basis. When these charged particles - electrons and protons - strike SOHO's Large Angle and Spectrometric Coronagraph (LASCO), they overexpose sections of the instrument's sensitive detector, which show up as bright spots and trails. 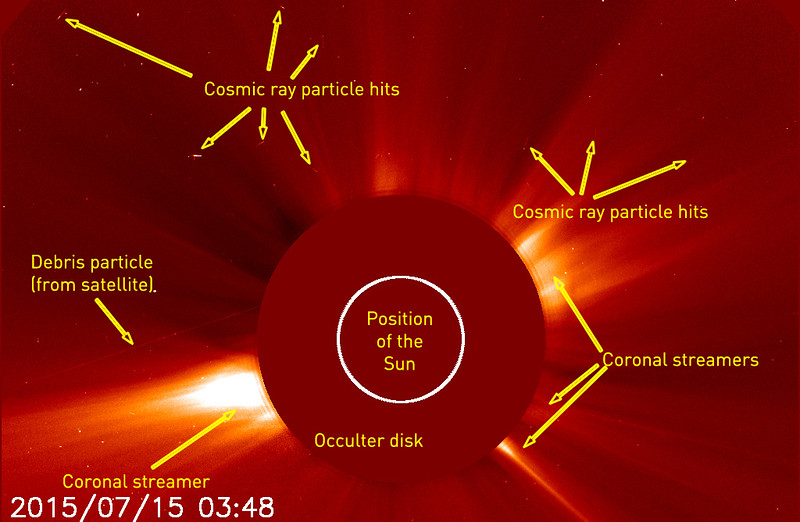 Spots and dots are produced by a particle that strikes the detector straight on, while steaks are created when a particle hits the detector on an angle. Also visible in the image above, to the left of the Occulter disk, is a streak left behind by was likely a bit of debris coming off some part of the spacecraft and flying in front of the detector. Some UFOlogists claim that these show up more often just before a massive coronal mass ejection erupts from the Sun, and they would be correct in that claim. Coronal mass ejections are often preceded by powerful solar flares, which are often a source of the energetic particles that strike SOHO's detectors, causing a "blizzard" effect on the spacecraft's view.

WATCH BELOW: The planet Mercury shines brightly at it transits across SOHO's LASCO C2 field of view, from July 22 to 25, 2015.

Shown in the video above, coronal matter streams away from the Sun as the planet Mercury crosses the field of view from right to left. The planet appears stretched out as the bright light reflected from its sunlit face overexposes that part of the LASCO detector.

Meanwhile, a nearly constant bombardment of cosmic ray particles from the Sun mark tiny spots and streaks on LASCO's detector. Freeze the playback at any point and some of these spots may appear to be something else, however they are simply momentary image artifacts, and not anything alien.

Note, also visible in the video are stars "travelling" from left to right in the background - due to SOHO's viewing angle changing as it orbits the Sun along with the Earth - and a massive coronal mass ejection blasts away from the western limb of the Sun partway through Mercury's transit.

Other objects and artifacts that show up in SOHO views include sungrazing comets, like Comet ISON in 2013 (around 2,985 found so far!), and missing data blocks due to persistent overexposure due to a cosmic ray hit (filled in by data from the last valid time-step for that portion of the image).

When it comes down to it, it's the dream of many a science fiction fan to have humanity meet an alien race - hopefully sooner rather than later and hopefully peacefully as opposed to violently. Also, when we look at the true vastness of our universe, and the tiny, rather mundane portion of it that we inhabit, little doubt can be raised that there is alien life out there - be it microbes or intelligent aliens possibly millions to billions of years beyond us.

The search for intelligent aliens out in the universe is an important pursuit for humanity, and it may even be necessary for our continued development. However, despite that, looking closely at these claims of giant alien ships lurking about the Sun, they simply don't stand up to the light of day, while any unresponsiveness on the part of NASA has much less to do with fantastic secrets than it does the cold hard fact that tiny charged particles make a much more plausible explanation for these occurrences.