Expired News - TRAPPIST-1 exoplanets may have more water than Earth: study - The Weather Network
We use cookies on this site to improve your experience as explained in our Cookie Policy. You can reject cookies by changing your browser settings.   READ MORE I ACCEPT

News
Editor's Choice
A face appears in the stormy Great Lakes. See it, here
OUT OF THIS WORLD | What's Up In Space - a weekly look at the biggest news coming down to Earth from space

TRAPPIST-1 exoplanets may have more water than Earth: study

Monday, February 5, 2018, 5:01 PM - New observations of the alien worlds in the TRAPPIST-1 system are providing even more support for the idea that one or more of these exoplanets could support life, and some of them may have even more water than Earth!

TRAPPIST-1, a system of seven exoplanets, orbiting a small dwarf star roughly 40 light years away, has captured the attention of astronomers since its discovery was announced nearly a year ago. Two new studies, based on numerous observations over the past years, are now revealing even more about these remarkable worlds.

At the time of their discovery, this collection of alien worlds resembled a miniature, yet overpopulated version of our inner solar system. Simply from the data that was first gathered, as the Kepler Space Telescope captured them 'transiting' across the face of their star, all seven planets were thought to be small, rocky planets, like Earth, Venus, Mars and Mercury. Even more remarkable, however, was that a total of three of these worlds orbited in their star's habitable zone - the band of space around the star where water could exist in liquid form on a planet's surface. Here in our own solar system, only Earth is truly habitable by that standard, with Mars having some potential, but for its extremely thin atmosphere and lack of a planetary magnetic field. 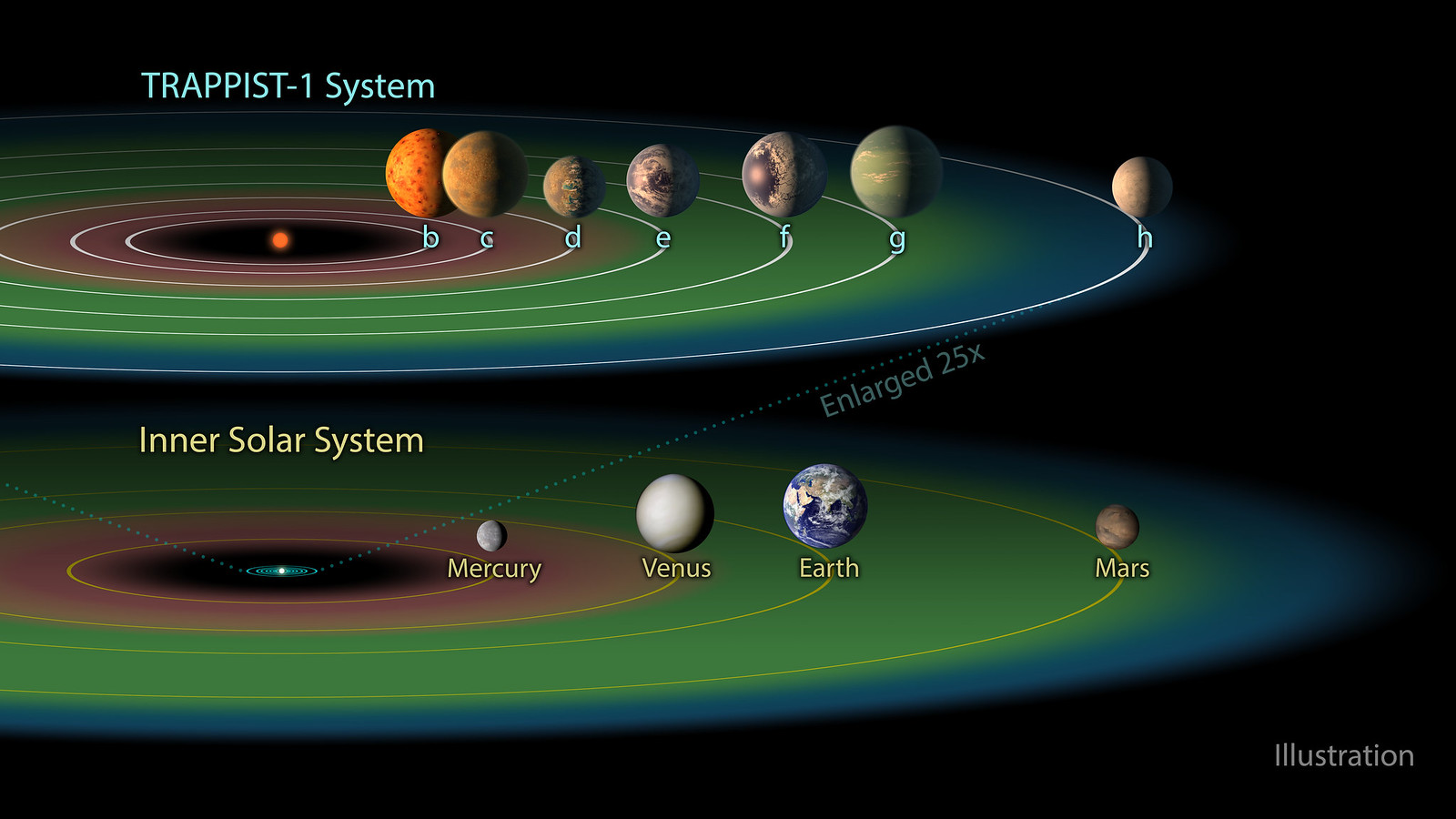 The TRAPPIST-1 planetary system compared to our own solar system. Note that, due to the tiny size of the star, TRAPPIST-1, its planets all orbit well within the orbit of Mercury. The temperature bands of both stars are shown as well, with the green band denoting each star's habitable zone. Credit: NASA/JPL-Caltech

The first of these new studies, led by Dr Simon Grimm of the Centre for Space and Habitability (CSH) of the University of Bern, in Switzerland, used data from the Kepler Space Telescope, the Spitzer Space Telescope and telescopes on the ground, to examine how these planets influence one another, and produced a much more detailed look at their natures.

"In the TRAPPIST-1 system, the planets are so close together that they perturb each other", Grimm said in a University of Bern press release. "This causes a slight shift in the times of each transit. Using a computer model, one can simulate the planetary orbits until the calculated transits agree with the observed values, which thus also yields the planets' masses."

So, taking into account the gravitational 'tug of war' taking place in the TRAPPIST-1 system, as the planets all circle around their star, Grimm and his colleagues were able to refine the size, mass and density of these worlds. This not only gives us a better idea of which worlds are rocky, but also which ones could potentially harbour alien life.

According to the University of Bern:

Thanks to the new mass calculations, the densities of the planets can now be estimated more accurately than was previously possible, leading to new findings about their composition. For example, the research team came to the conclusion that the two innermost planets, TRAPPIST-1b and c, presumably have a dense atmosphere, whereas TRAPPIST-1e is probably a rocky planet with a thin atmosphere. TRAPPIST-1d has only around 30% of the Earth’s mass and is thus the lightest of the seven planets. It is presumably surrounded by volatile substances such as water - but it is unknown whether this is in the form of an extended atmosphere, ocean or ice layer. The three outermost planets, on the other hand, TRAPPIST-1f, g and h, are so distant from the sun that their surfaces are probably enveloped in a layer of ice.

A comparison of the masses, and energy input, of the seven TRAPPIST-1 planets to that of the four planets of the inner solar system. Credit: NASA/JPL-Caltech

Surprisingly, their results show that some of these planets could have an abundance of water on their surface - possibly up to 5 per cent of the planet's mass, which is 250 times the amount of water Earth has on its surface.

Knowing the density of a planet is not a direct indicator of how habitable it is, as pointed out by Brice-Olivier Demory, a co-author of the study at the University of Bern, but it does help narrow down what we can say about the environment there.

We can also look at the planet's atmosphere.

In a second study, an international team of astronomers, led by Julien de Wit from MIT, used the Hubble Space Telescope to watch each of the TRAPPIST-1 planets as they passed in front of their star, specifically to gain insights into the composition of their atmospheres.

Catching several transits, including a double transit by the two innermost planets of the system, the team carefully picked out the light from each transit which would have passed through the edge of the planet's atmosphere, and they split that light to produce a spectrum, to reveal the composition of the atmospheres.

Specifically, there were two scenarios for what Hubble would see, as illustrated below.

These illustrations show what Hubble would have seen from the TRAPPIST-1 planets under two scenarios - an extended, hydrogen-rich atmosphere (top) and a thinner, terrestrial atmosphere (bottom). Credit: NASA, ESA and Z. Levy (STScI)

In the top case, the light from the star passes through an extended atmosphere surrounding the planet - an atmosphere that would most likely be composed of hydrogen, helium, methane and water - which would produce the spectrum shown in purple, to the right. In the bottom case, the light passes through a much thinner atmosphere, producing a result with the same or similar "bumps" in the spectrum curve, but much smaller amplitude.

As shown below, at least for three of the planets examined by Hubble, the results are fairly encouraging.

The spectra from four TRAPPIST-1d, e, f and g. The purple curves indicate what Hubble would have seen from these planets if they had an extended hydrogen atmosphere, as in the "top" case of the previous image. The green crosses represent the data gathered from the Hubble Space Telescope. Credit: NASA, ESA and Z. Levy (STScI)

As shown in the graphs for TRAPPIST-1d, e and f, the Hubble data (the green crosses) does not match what the telescope would have shown if these planets had hydrogen-rich atmospheres (the purple curve). Instead, they have profiles that are closer to what would be seen from a rocky world with a thin atmosphere. For TRAPPIST-1g, more observations are needed before they can say anything definitive.

"The presence of puffy, hydrogen-dominated atmospheres would have indicated that these planets are more likely gaseous worlds like Neptune," de Witt said in a Hubble press release. "The lack of hydrogen in their atmospheres further supports theories about the planets being terrestrial in nature. This discovery is an important step towards determining if the planets might harbour liquid water on their surfaces, which could enable them to support living organisms."

While this is remarkable data gathered by Hubble, this is likely as much as we'll get until the launch of the James Webb Space Telescope in 2019.

"Our results demonstrate Hubble’s ability to study the atmospheres of Earth-sized planets. But the telescope is really working at the limit of what it can do," Hannah Wakeford, co-author of this study from the Space Telescope Science Institute, said in the Hubble release.

"Spectroscopic observations of the TRAPPIST-1 planets with the next generation of telescopes - including the James Webb Space Telescope - will allow us to probe deeper into their atmospheres," Michael Gillon, another co-author of this study from the University of Líege, Belgium, said in the release. "This will allow us to search for heavier gases such as carbon, methane, water, and oxygen, which could offer biosignatures for life."