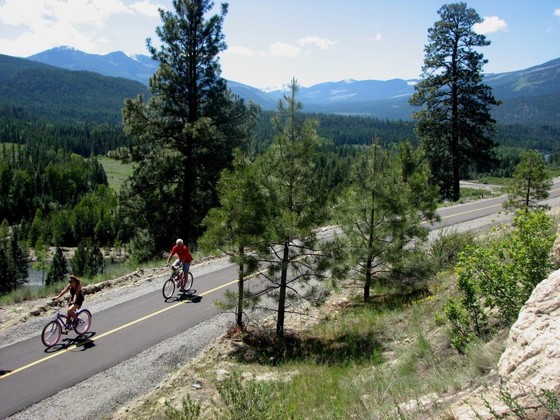 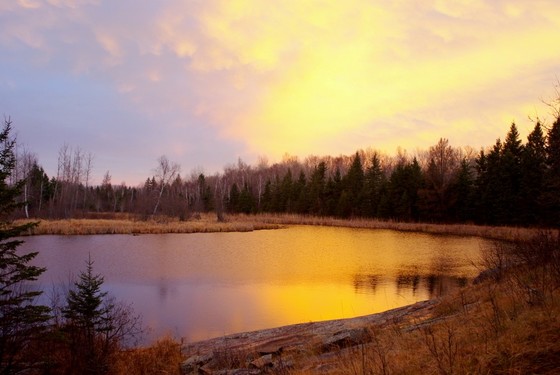 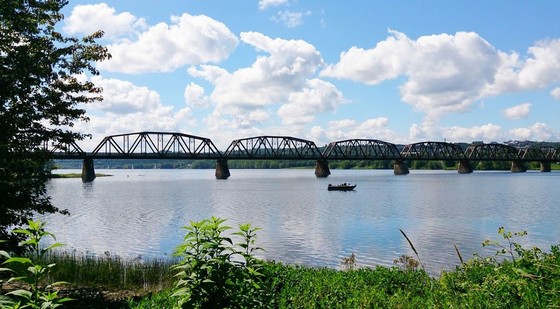 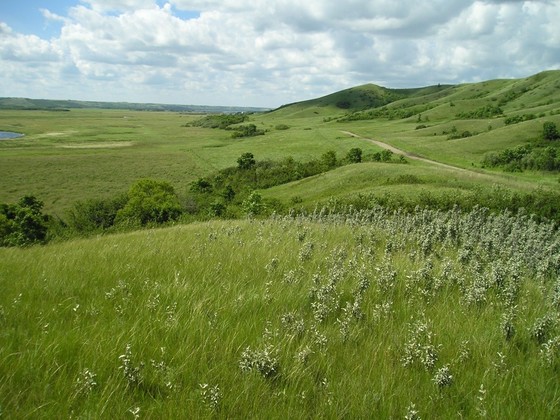 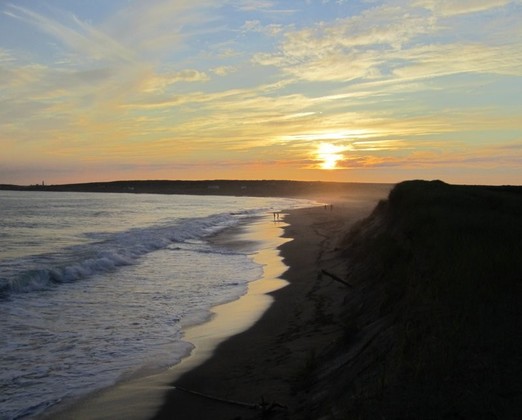 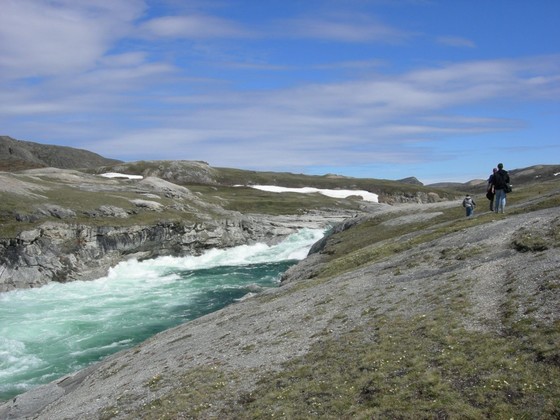 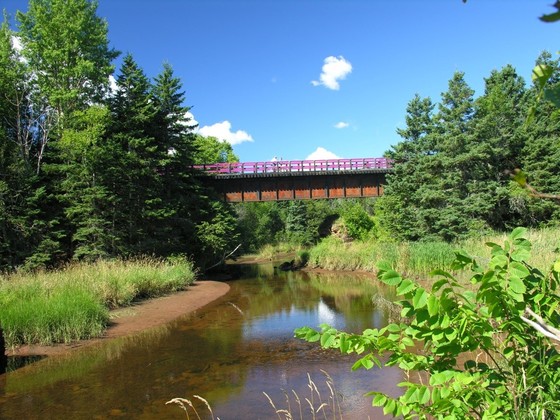 Prince Edward Island's Confederation Trail currently spans 410 kilometres across the entire province. It passes through the rural community of Brudenell, over their namesake river on a pedestrian bridge which was once a railway structure. Brudenell is just one of the many attractions along PEI’s Confederation Trail, where visitors and residents alike can enjoy many activities including walking, hiking, running and cycling. The Confederation Trail opened for use in 1994 and has continued to develop ever since, making PEI the second province to complete its section of the TCT. Full connection is in sight for September 2014, when the final 30 kilometres of the Confederation Trail will be built, and PEI will have over 450 kilometres of operational trail. 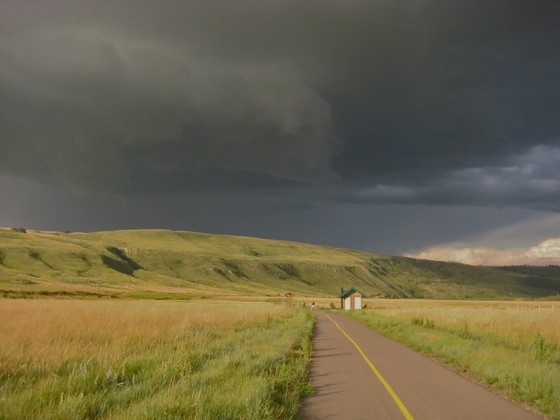 Glenbow Ranch Provincial Park spans over 12 kilometres along the north shore of the Bow River between the City of Calgary and the Town of Cochrane, Alberta. A long-time ranching family, the Harvie family, gifted the land to the Province in 2006, with the vision of preserving this spectacular natural working landscape that was integral to the history of the area. For trail advocates and recreational users, the Park provided an important opportunity for a trail connection between the two communities. The Park also provided a unique opportunity to celebrate and showcase Alberta’s rich ranching history and culture. In 2011, a new trail through Glenbow Ranch Provincial Park was officially designated as part of the Trans Canada Trail, allowing visitors to experience the area’s native flora and fauna and breathtaking views of the Bow River valley landscape. The Trans Canada Trail in Alberta is currently 59 per cent complete, with 1,200 kilometres left to connect in time for Canada’s 150th Birthday celebrations in 2017. Once complete, the Trans Canada Trail will stretch some 3,000 kilometres through the province, connecting to Saskatchewan, British Columbia and the Northwest Territories. 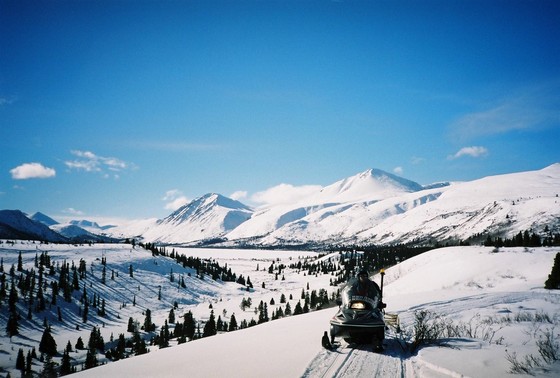 The Whitehorse Copper Trail is the main line of the Trans Canada Trail in Whitehorse, Yukon. It runs north to south, just west of urban Whitehorse. The Copper Trail is named after the old Copper Haul Road, running through a copper belt last mined in the 1970s. The Trail connects many of the major multi-use trail areas around Whitehorse, from Fish Lake Road in the north down to the Peter Greenlaw Memorial Bridge over Wolf Creek in the south. This Trail serves snowmobilers, skiers and dog-sledders in winter, and hikers and cyclists in the summer. Main access to the Trail is via the Fish Lake Road, Mt Sima road and several urban connector trails that lead to the various residential areas of Whitehorse. The Trans Canada Trail is currently 92.1 per cent connected in the Yukon, with a total of 125 kilometres left to connect by 2017.

The city of Lévis is located on the south shore of the St. Lawrence River, looking across to Quebec City directly opposite, and is home to the Trans Canada Trail’s Parcours des Anses trail. Officially inaugurated as a section of the Trans Canada Trail in 2007, this picturesque fully-paved Trail spans 13 kilometres and winds along the St. Lawrence River, offering visitors the opportunity to walk, cycle or rollerblade. Trail-users can enjoy views of magnificent bridges, old wartime fortifications as well as Quebec City’s world famous hotel, the Chateau Frontenac, along this urban trail. Quebec’s section of the Trans Canada Trail is nearly complete at 96.3 per cent, with just over 50 kilometres left to connect by 2017. 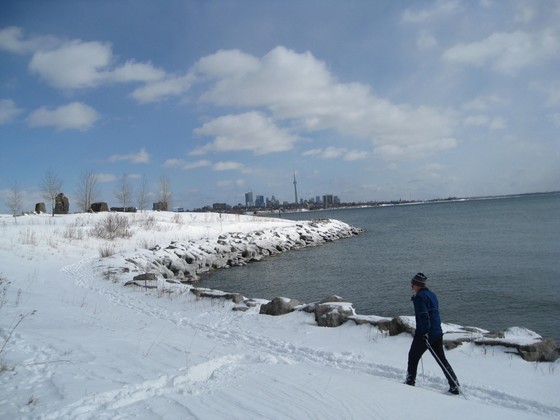 The province of Ontario is home to almost 3,500 kilometres of the Trans Canada Trail, including the Toronto Waterfront Trail. Currently 100 kilometres long, this section of the TCT runs from the town of Pickering to Hamilton, connecting approximately four million Canadians. The Toronto Waterfront Trail is considered an urban gateway to Lake Ontario, as it runs along its shore, with spectacular views of Toronto’s downtown core, including tourist attractions like the CN Tower. The Trans Canada Trail in Ontario is currently 68 per cent complete, with just over 1,600 kilometres left to connect by 2017. Once fully connected, Ontario will have the longest section of the Trans Canada Trail in Canada, spanning over 5,000 kilometres. 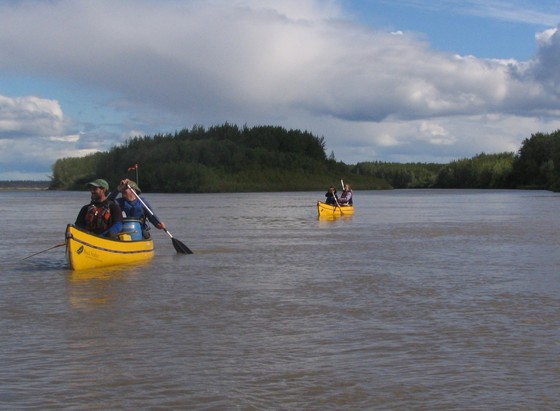 In the Northwest Territories, the Trans Canada Trail is composed of mainly water trails that traverse more than 2,200 kilometres. Among these trails is the entire Slave River, which stretches from Great Slave Lake all the way to Peace-Athabasca Delta in Alberta. The Slave River was once the trade route followed by First Nations and the earliest European explorers. Now, in the summer, it turns into a playground for boaters, kayakers and canoeists. The Trans Canada Trail in the Northwest Territories is currently 98.2 per cent connected, covering almost 3,000 kilometres, most of which are water trails; only 52 kilometres remain to be connected by 2017. 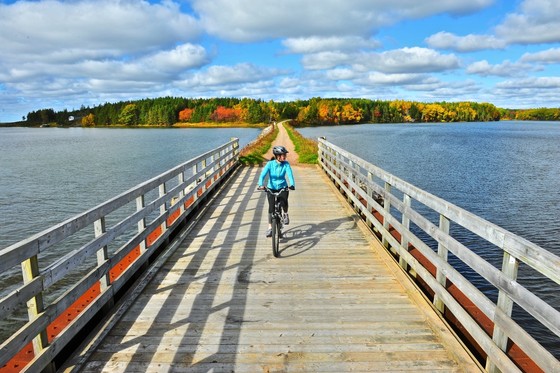 The Trans Canada Trail’s Celtic Shores Coastal Trail in Nova Scotia is a 92-kilometre multi-use trail stretching from Port Hastings to the Town of Inverness on the west coast of Cape Breton Island. This flat trail is open year-round and is ideal for cyclists, hikers, runners, skiers, snowmobilers and horseback riders. It traces the coastline, winding through picturesque wilderness, skirting streams, and connecting several communities. Attractions include some of the best live Celtic music on the island and a unique Gaelic culture. The Trans Canada Trail in Nova Scotia currently spans almost 400 kilometres and is 41 per cent complete, with just over 500 kilometres left to connect for 2017.