Expired News - Top 25 most Christmassy countries, here's where Canada ranks - The Weather Network
We use cookies on this site to improve your experience as explained in our Cookie Policy. You can reject cookies by changing your browser settings.   READ MORE I ACCEPT

Tuesday, December 11, 2018, 2:11 PM - Canada tops many lists; best place to visit, most admired, tops for quality of life to name a few. Now, it’s our Christmas spirit that has us winning again.

According to Taxi2Airport, Canada is the most Christmassy of countries.

The site says it “thoroughly analyzed an array of festive data for every country around the world, including Christmas travel recognition, the chance of snow, and the popularity of Christmas music.”

Each country was given a ranking for each category from 1-5 with 5 being the best. Canada scored nineteen out of twenty-five.

Of course, people around the world celebrate in a variety of interesting ways, so a lot had to be taken into consideration. We think Norway would have topped us if photos of that white baby reindeer had been leaked before the survey.

We do like our Christmas music and our Canadian singers. Michael Bublé, Joni Mitchell, and Justin Bieber are popular choices but our favourite, according to Spotify, is Sarah McLaughlin’s Away in a Manger. Researchers also looked into how many times Canadians went online to search “Christmas” and at the density of our Christian population.

Having snow is key. Now, we at The Weather Network understand that not every place in Canada sees a white Christmas every year, but on a whole, the average was pegged at just over 43%. Then there’s the activities. “From skiing with Santa at the world-renowned Whistler Blackcomb ski resort to ice skating around Lake Louise – hailed ‘the world’s best-skating rink’ – and riding in a horse-drawn sleigh in Sun Peaks, it’s easy to see why Canada topped our festive countries index.”

This means we can continue decorating that tree in late November and keeping those lights up until February, right? 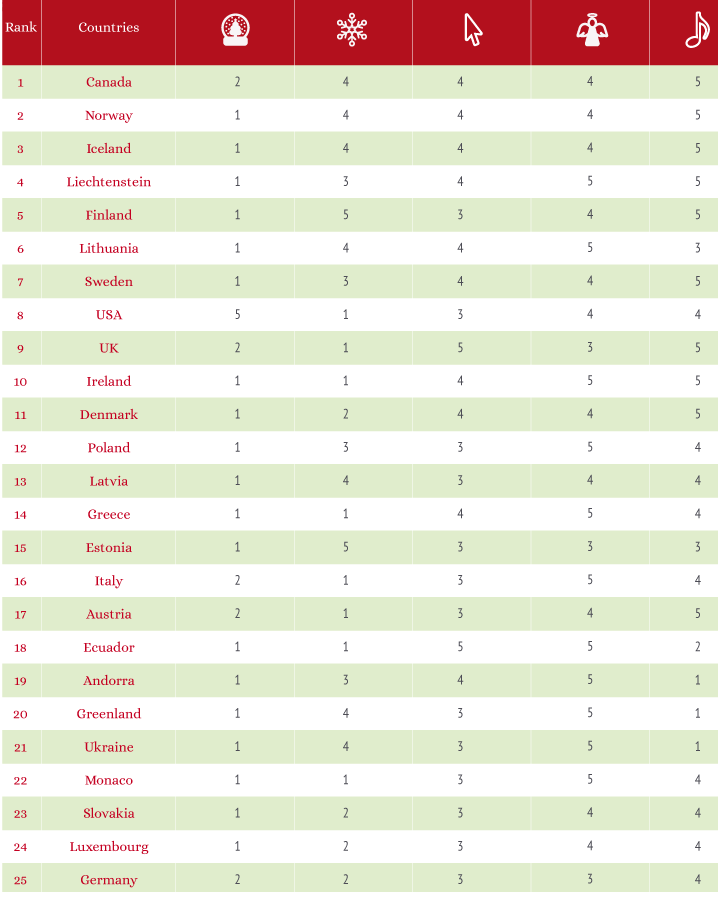 WATCH BELOW: WINTER WONDERLAND SHOW PROJECTED ONTO THE PARLIAMENT BUILDINGS, SEE IT HERE