Expired News - Rescue from BC mountain highlights dangers of backcountry - The Weather Network
We use cookies on this site to improve your experience as explained in our Cookie Policy. You can reject cookies by changing your browser settings.   READ MORE I ACCEPT

Rescue from BC mountain highlights dangers of backcountry

Thursday, December 20, 2018, 12:56 PM - A backcountry skier's fall into a hidden tree well ended happily Tuesday, but a search and rescue expert says it's a warning to others.

Terrace Search and Rescue, in a statement, said its crews were called at around 3:20 p.m. PT to the backcountry of Shames Mountain, west of Terrace.

Two local men, approximately in their early 40s, were skiing when one of them went missing for over two hours. His partner skied up and down the mountain looking for him, and on his third pass, found him in a tree well, buried and suspended upside down.

He was injured, hypothermic and unable to move but fortunately had carved out an air pocket so he could breathe.

The uninjured skier called search and rescue which led to an arduous rescue operation. 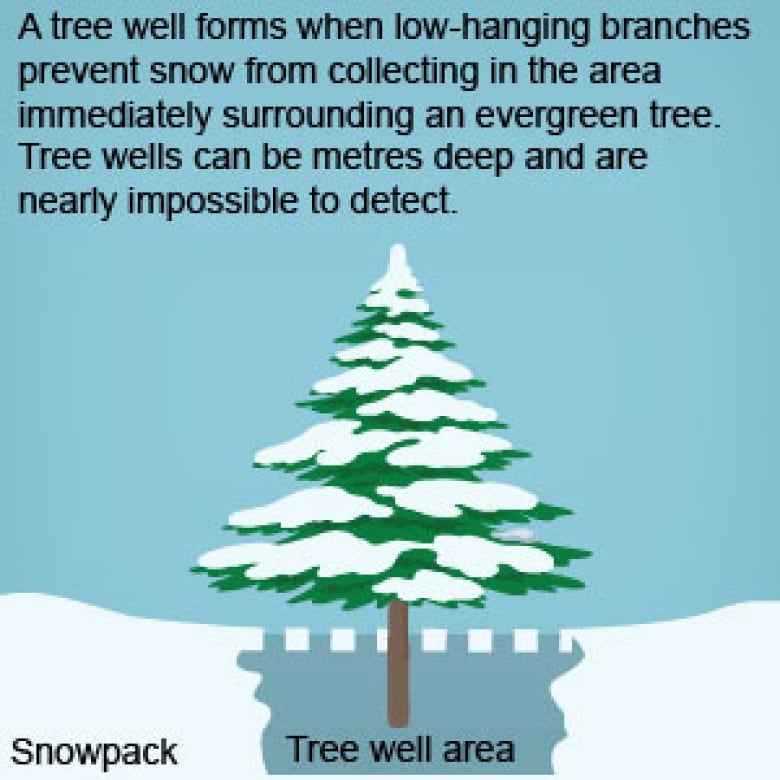 A graphic showing a tree well surrounded by a snowpack. (Duk Han Lee/CBC)

According to search manager Dave Jephson, the original plan was for the two men to wait on the mountain until morning for a helicopter rescue. However, the fallen skier's injuries spurred crews to jump into action immediately, despite fading light.

The SAR team also had to contend with fresh snow and the remoteness of the tree well, which required them to travel up and down mountains covering hundreds of metres of elevation.

The two men, fortunately, were able to meet crews part of the way and the SAR team had them off the mountain by 9 p.m. and the man was taken to hospital.

Tree wells are a common danger on mountains following snowfalls. They form underneath the branches of trees and create deep, hidden pits that skiers can fall into.

Jephson said this story highlights the dangers of tree wells — and the hazards of backcountry skiing in general.

"Skiing in the backcountry is not a bad thing," he said. "We have awesome people around here but they're prepared."

He has some advice for skiers: don't ski beyond your capabilities; don't ski where you're not qualified to ski; if you're a first-timer in the backcountry, go with someone more experienced; and always bring appropriate supplies.

Jephson said the injured man has been released from hospital and was resting at home as of Wednesday afternoon.