Expired News - Summer forecast: Our experts predict June, July and August - The Weather Network
We use cookies on this site to improve your experience as explained in our Cookie Policy. You can reject cookies by changing your browser settings.   READ MORE I ACCEPT

News
Editor's Choice
Could warmer weather help contain the coronavirus?
You've waited long enough: Find out how summer will look in your area for temperature and precipitation.

Thursday, July 30, 2015, 1:23 PM - Summer officially starts this Sunday, and it's going to feel awfully familiar to most Canadians.

The season is set to resemble 2014 for most people across the country, with some important distinctions, according to The Weather Network’s forecasting for the summer of 2015.

A strengthening El Niño, the “blob” of warmer-than-average water off British Columbia and spring rainfall patterns all figure into this forecast, which gives an overview of the dominant weather patterns for the upcoming season.

No matter the dominant temperature pattern in your area, there will be contrasting swings the other way.

It is too early to know if the long weekends will be hot or cold or whether it will rain on your vacation plans. You will have to check back for updates as those dates get closer.

But overall, here’s what to expect in each region for the combined warmest months of June, July and August, beginning with the provinces that had to wait the longest for spring to arrive. After enduring a cold and snowy winter that lingered well into spring, much of Atlantic Canada will be rewarded with an abundance of warm weather during the next three months. The Maritimes and Southern Newfoundland are expected to experience near-seasonal temperatures and precipitation during the summer. However, below-seasonal temperatures are expected for Northern Newfoundland and Labrador.

Near-normal temperatures for the summer as a whole, however, do not mean that temperatures will be consistently normal every day. There will be periods of warm to hot weather and periods of cool weather, but the swings in temperature should come close to offsetting each other throughout the region.

Alternating periods of wet weather and dry weather should come close to offsetting each other across the region and produce rainfall totals for the summer that are near normal for the region.

Quebec and Ontario: Everything in moderation

Extended periods of pleasant summer weather are expected across Southern Ontario and Southern Quebec during the next three months. There will be periods of very warm to hot weather. But similar to last summer, hot weather at 30°C and above will not dominate the summer. There will, however, still be numerous days with high temperatures in the mid to upper 20s across the south and in the low to mid 20s across central and northern regions.

Alternating periods of dry and wet weather should result in near-normal precipitation for most of the region. However, a rather wet summer is expected south of the U.S. border, and it is possible that areas near the border will trend toward above-seasonal precipitation.

Alberta and British Columbia: The heat is on

Like last summer, above-seasonal temperatures are expected to dominate this region, though occasional periods of cooler weather are expected, especially in Alberta.

Below-average rainfall is expected for British Columbia. The combination of warm and dry conditions elevates concerns about the spread of any wildfires that develop.

Below-average precipitation is forecast for parts of Yukon and Northwest Territories, especially between Whitehorse and Yellowknife. The combination of relatively dry conditions with warmer-than-normal temperatures elevates concerns about the spread of any wildfires that develop in this region.

A quieter-than-average storm season is expected in the Atlantic Basin, especially in the regions where tropical storms and hurricanes typically form. However, conditions will be favorable for development in the Gulf of Mexico and near the Southeast coast of the United States. This elevates the concern for a substantial landfall impact along the coast of the United States with a few of the storms that do develop, and the potential to impact Atlantic Canada as well.

WATCH: Explaining El Niño and the clues it provides:

Developing seasonal outlooks involves a thorough analysis of global weather patterns and global sea surface temperature trends. Numerous models provide clues about how these patterns will change during the coming months, but an understanding of cause-and-effect relationships between the ocean and atmosphere will often beat the seasonal model forecasts.

The rapid strengthening of El Niño is the key consideration in the development of our summer forecast. El Niño is associated with a warming of sea-surface temperatures in the tropical regions of the Pacific Ocean, primarily to the west of South America. When ocean water temperatures in this region are warmer than normal, it impacts weather patterns around the world.

The colors on the map below indicate sea surface temperatures relative to normal with the various shades of yellow and red representing above-average water temperatures. The circled region highlights the region of interest for warmer ocean waters associated with El Niño.

Forecast factor: In ‘blob’ we trust

The large region of warmer-than-average ocean water temperatures south of Alaska and west of British Columbia is another key factor. Known as the “blob” and circled on the map below, this has been a key contributor to the dominate weather pattern across North America during the past two winters and last summer. 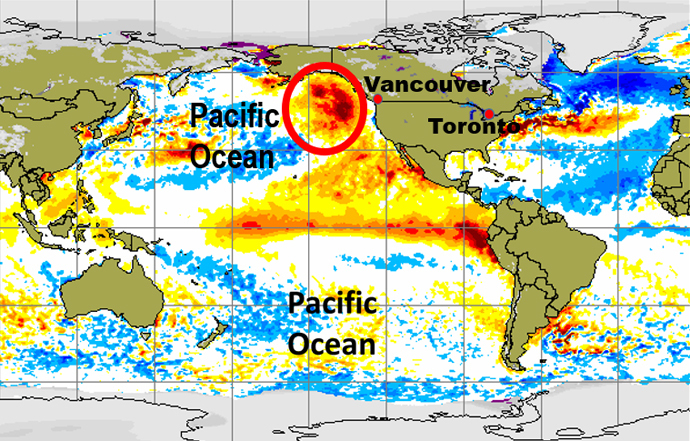 Forecast factor: Rain from the plains

The spring precipitation pattern across North America will also have an impact on the upcoming summer. The record rainfall during May across the Central and Southern United States will tend to limit the development of extended heat waves across Southern Ontario and Southern Quebec. When the Southern and Central United States are dry, this region is a source for hot dry weather from the Great Lakes to the Maritimes, but that will not be the case this year as this region is expected to remain relatively cool and wet for much of the summer.

The trouble with summer rains

Why is it so difficult to forecast summer precipitation? During the other seasons, most of the precipitation falls from large weather systems, and persistent storm tracks for these systems can often be identified well in advance.

During the summer, a significant amount of the rain comes from thunderstorms, which produce tremendous ranges in rainfall total over very short distances. This makes it possible for one town to have a wet summer while nearby towns have a dry summer. Also, just one very rainy day can skew the final numbers of the entire season.

CHASING THE AURORA: THE PASSION AND PATIENCE BEHIND THESE STUNNING IMAGES
View Gallery Upload Video