Expired News - Star-eating monster gives peek behind the veil of the cosmos - The Weather Network
We use cookies on this site to improve your experience as explained in our Cookie Policy. You can reject cookies by changing your browser settings.   READ MORE I ACCEPT

News
Editor's Choice
How to keep animals off your property this spring
In this simulation, a Sun-like star wanders too close to a supermassive black hole, with cataclysmic results.
OUT OF THIS WORLD | Earth, Space And The Stuff In Between - a daily journey through weather, space and science with meteorologist/science writer Scott Sutherland

Star-eating monster gives peek behind the veil of the cosmos

Sunday, November 29, 2015, 12:41 PM - Watching as an act of cataclysmic stellar destruction took place before their eyes, astrophysicists have shed light on the surprisingly elegant nature of our universe.

Far out in space, 290 million light years away in the heart of another galaxy, a star very similar to our own Sun had the misfortune of slipping a bit too close to the monster black hole that resides there. Drawn inexorably towards its fate, this star was torn to shreds by intense gravitational forces, producing a disk of glowing matter around the black hole's event horizon and an intense beam of high-energy particles - known as a tidal disruption flare or a jet - travelling towards Earth at very close to the speed of light.

As it happened, when the light from this flare reached Earth in November 2014, a team of Ohio State University astronomers happened to be scanning that portion of the night sky for potential supernovae, and they noted the very unusual nature of what they were seeing.

Galaxies are not supposed to do that: from a normal galaxy to broad emission-line galaxy. https://t.co/FtlyByjo5R pic.twitter.com/pSIIKAorfu

Picking up on this discovery, Sjoert van Velzen, a Hubble Postdoctoral Fellow at Johns Hopkins University, quickly organized efforts to gather more information on the event, to add to what had already been collected from ground-based telescopes and satellites in orbit. The results of this campaign of observations yielded up the very first observation of this kind of event from start to finish.

"These events are extremely rare," van Velzen told John Hopkins' The Hub. "It's the first time we see everything from the stellar destruction followed by the launch of a conical outflow, also called a jet, and we watched it unfold over several months."

Astronomers have seen these tidal disruption flares before. There was a particularly notable one spotted by NASA's Swift X-ray telescope in 2011 - named Swift J1644+57 - which took place in a galaxy nearly 4 billion light years away. In that case, while astronomers were able to deduce that it resulted from a supermassive black hole consuming a star, the event was so distant, and the flare so intense, that they were unable to actually see the star being ripped apart. 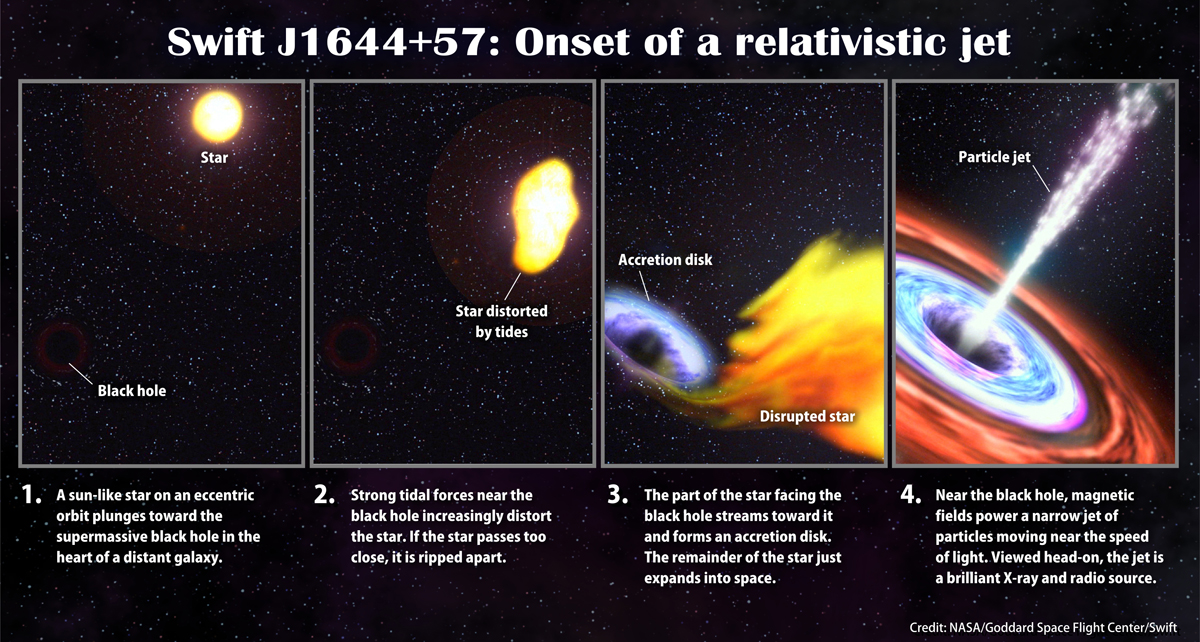 This latest tidal disruption flare, spotted in late November 2014, was different, though. It was much closer, and much less powerful, which allowed astronomers to watch the entire event unfold.

"Our work is indeed the first to find the stellar destruction first, followed by a jet," van Velzen wrote in an email to The Weather Network. "Also, the jet we found (called ASASSN-14li) is very different from the previous Swift J1644+57 jet. The source we discovered is much less powerful, carrying about a thousand times less energy. This is puzzling since we think that for both the Swift event and our jet, the same amount of material (or energy) was available, namely one star's worth of gas."

Based on what van Velzen wrote, there was a certain amount of luck involved in this discovery as well. The black hole that emitted ASASSN-14li, just like other active black holes, has an existing jet that's produced by the small amount of gas it is always drawing in from the space around it. The existing jet for this black hole, however, is not pointed at Earth.

For us to detect ASASSN-14li, the star that was ripped to shreds fell into the black hole at just the right angle to launch a separate jet directly towards us. If the angle was off by just a tiny amount, we would have missed it.

Black holes are very strange "creatures" in our universe. They result from the collapse of immense stars, with so much matter crushing down into one point that it creates a virtually inescapable "hole" in space. The only way to "see" these objects is by watching the effects of their gravity on objects around them. Figuring out exactly what goes on inside one is a challenge even to the most brilliant minds on the planet.

This particular black hole discovery, though, has pulled back the veil to give us a glimpse at the sometimes hidden elegance of our universe.

As van Velzen and his team watched the star spiral in towards the black hole and be torn apart, they were able to predict that they would see a flare as a result.

This was due to what is known as the scale-invariant model of accretion, or what van Velzen called the "Matryoshka-doll" theory of astrophysics.

Basically, when it comes to compact astrophysical objects - black holes, neutron stars or white dwarf stars - just like a Matryoshka doll, scale the stellar remnant up or down, from the least massive white dwarfs to the most massive of supermassive black holes, and you get the same result. Provide the object with an ample supply of gas, they all produce these jets of matter in the same way.

What's next for this kind of research?

Since this discovery now shows that in some cases, telescopes and observatories can actually pick up these events as they happen, rather than just seeing the after effects, astronomers will be watching carefully for the next one, to see just how common they really are.