Expired News - Arctic winter ice breaks record low for third year straight - The Weather Network
We use cookies on this site to improve your experience as explained in our Cookie Policy. You can reject cookies by changing your browser settings.   READ MORE I ACCEPT

News
Editor's Choice
COVID-19 could impact weather forecast accuracy
It's official... 2017's winter Arctic sea ice maximum is the lowest in the satellite record.
OUT OF THIS WORLD | What's Up In Climate Change - a glance at the most important news about our warming world

Wednesday, March 22, 2017, 2:26 PM - We're in 'uncharted territory' due to the unprecedented global heat Earth is experiencing, sea ice reaches record-breaking lows at both poles, and carbon dioxide levels in the atmosphere may reach 410 ppm this year. It's What's Up In Climate Change!

Thursday, March 23 is World Meteorological Day, which will honour the 67th anniversary of the establishment of the United Nations' World Meteorological Organization (WMO). While the WMO has accomplished some great things, setting standards and creating networks that have helped atmospheric scientists to understand our weather and climate, and to better protect us from extreme events, this particular World Meteorological Day comes with a bit of a down-side.

"Even without a strong El Niño in 2017, we are seeing other remarkable changes across the planet that are challenging the limits of our understanding of the climate system. We are now in truly uncharted territory."

That is the word from World Climate Research Programme Director David Carlson, as the WMO released their State of the Global Climate report on Tuesday, March 21.

From this report, which includes data from NASA, NOAA and the UK Met Office:

• 2016 global temperatures reached 1.1oC above the pre-industrial average, or 0.06oC above the record set in 2015.
• Each of the 16 years since 2001 has been at least 0.4oC above the long-term average for the 1961-1990 base period, used by WMO as a reference for climate change monitoring.
• Carbon dioxide concentration of the atmosphere reached 400 ppm in 2015 and remained above that level even at the 2016 minimum. It will be several generations from now before we see CO2 levels drop back below that point.
• Global sea ice extent has been well below average, with the lowest Arctic sea ice winter maximum on record, and it dropped more than 4 million square kilometres below average in November (an unprecedented anomaly for that month).
• Global sea levels rose very strongly during the El Niño event, with the early 2016 values reaching new record highs.
• Global ocean heat content was the second-highest on record after 2015.
• Precipitation extremes - low and high - contributed to worsening drought conditions in some parts of the world, and extreme flooding in others.
• Extremes in temperature caused heat waves in southern Africa, and across south and southeast Asia.

This extreme weather has also continued into 2017, and according to the WMO:

At least three times so far this winter, the Arctic has witnessed the Polar equivalent of a heatwave, with powerful Atlantic storms driving an influx of warm, moist air. This meant that at the height of the Arctic winter and the sea ice refreezing period, there were days which were actually close to melting point. Antarctic sea ice has also been at a record low, in contrast to the trend in recent years.
Scientific research indicates that changes in the Arctic and melting sea ice is leading to a shift in wider oceanic and atmospheric circulation patterns. This is affecting weather in other parts of the world because of waves in the jet stream – the fast moving band of air which helps regulate temperatures.
Thus, some areas, including Canada and much of the USA, were unusually balmy, whilst others, including parts of the Arabian peninsula and North Africa, were unusually cold in early 2017.

The full text of the report is available here (pdf).

This is a new one: Sea ice extents reached record low levels this month, in both the Arctic and Antarctic!

In the Arctic, sea ice growth throughout the winter was sluggish and hampered by repeated storms delivering blasts of wind and warmth to the North Pole. This has resulted in the lowest winter maximum for Arctic sea ice extent since record keeping began in 1979 - 14.42 million square kilometres on March 7.

This is the third year in a row that we've seen a new record low for winter sea ice extent in the north.

Arctic Sea Ice Extents, Jan through April, 1979-2017. Each successive year, 2015, 2016 and 2017, has logged a new record low for winter maximum extent. Sea ice extent has currently plunged back into record low levels, lower than any other seen for this time of year during the satellite record. Credit: NSIDC/S. Sutherland

In the Antarctic, where there have been some record highs for sea ice extent in past years, there have been record low levels since southern spring, and the summer minimum extent reached a new record low on March 3, of 2.11 million square kilometers.

According to the U.S. National Snow and Ice Data Center (NSIDC), "Antarctic air temperatures during the autumn and winter were above average, but less so than in the Arctic." Their data shows that temperatures along the sea ice edge were between 1oC and 2.5oC above the 1981-2010 average.

It's unclear exactly why the sea ice extent around Antarctic reached such a low this year.

The years of sea ice growth around Antarctica have been (mostly) attributed to two factors: 1) strong wind circulation around the continent, which pushed the existing ice farther out to sea, and 2) fresh melt-water from glaciers on land, just a degree or two above freezing, pouring into the ocean surface layer, where it quickly froze into more ice.

However, sea ice experts have been warning that this trend would very likely not continue, and that eventually, rising ocean temperatures and changes to weather patterns from climate change would impact the southern sea ice extent as well, whittling it away as we've seen in the north.

Going forward, it's difficult to know what effect either of these record lows - Arctic or Antarctic - will have on extents going forward for this year, but in the Arctic, this record low maximum is also accompanied by some very thin, young ice.

"Thin ice and beset by warm weather -- not a good way to begin the melt season," NSIDC lead scientist Ted Scambos said in a statement on Wednesday.

In the Arctic, the 2015 and 2016 lows for winter maximum extent were both followed by summer minimums that ranked among the bottom five lowest extents in the record books (along with 2007, 2011 and 2012), and the annual sea ice average for 2016 came in as the lowest ever seen. A new low for winter 2017 stands a good chance of producing another similar summer minimum, and it becomes much easier for random weather events to push the extent even lower, as they did in 2012. If this is a bad weather year for the Arctic in summer, as it has been for the winter so far, this could be the year that the sea ice extent there breaks that 2012 extreme low.

Having extensive ice in the Arctic, year-round, is important. Not just for the climate, but for the ecosystem, as well.

Paul Crowley, head of WWF-Canada’s Arctic team, says that there are several Arctic species that depend on having year-round sea ice, such as polar bears, caribou, beluga whales and narwhals. These species have never experienced an Arctic free of ice, or even with such low ice extents, and will be hard-pressed to adapt.

"This year's record low sea ice extent underscores the need to protect the Last Ice Area, where Arctic sea ice is projected to last the longest," Crowley told The Weather Network, referring to the region of sea ice just to the north of the Canadian Arctic Archipelago. "Sea ice is a critical habitat, and the basis for the Arctic marine food web. We must protect both the integrity of the sea ice and the ecologically productive areas on the edges of it, such as Lancaster Sound and the North Water Polynya, as important refuges for Arctic species that are moving northward as the planet warms."

The most unexpected aspect of the sea ice melt, according to Crowley, is the speed at which the changes are taking place. Model projections of the losses in the Arctic have been on the conservative side, he said, which just makes it all the more necessary to act now.

"Along with global actions to curb greenhouse gas emissions, creating a resilient network of marine protected areas is the way forward for maintaining healthy Arctic species and the people that depend on them," Crowley said.

It has only been a few years since we broke 400 parts per million of carbon dioxide at Mauna Loa, and it was just last year that even the minimum stayed above that threshold (and it likely will for generations to come!).

Now, based on how CO2 levels have been rising so far this year, and extrapolating out based on how they climbed in 2016, it's looking like we'll top 410 parts per million at the annual springtime maximum.

As the animation shows, the second graph - an unofficial speculation - is simply an expansion of the official Keeling Curve graph presented today by the Scripps Institute of Oceanography (shown in the first panel). Their readings at the peak of Mauna Loa show that CO2 levels on March 20, 2017 were at 406.37 ppm. The second graph is an altered version of that official one, where the points and smoothed curve of the data from March 21, 2016 until October 31, 2016 have been copied and pasted on to the end of the graph, and then adjusted upward so that the smoothed curves line up.

While this is not exact, it provides a fairly good estimate of how high CO2 concentrations may climb by the time they reach their annual maximum, sometime in May or June. As this speculation graph shows, daily, weekly and monthly values (circles), as well as the smoothed trend (in blue), all rise above 410 parts per million by that time.

With carbon dioxide levels fluctuating between around 200 ppm to 280 ppm over the past 800,000 years, the sudden spike over the past 200 years or so, due to the burning of fossil fuels, is extraordinary - somewhere around a 75 per cent increase in the concentration in such a very short time. 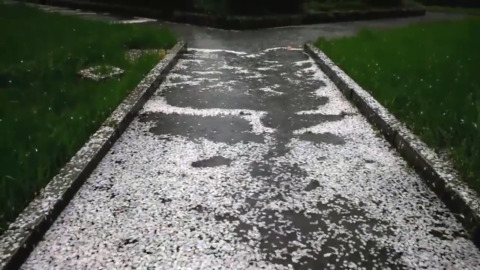