Expired News - This is how the 'snow bear' creator made its belly button - The Weather Network
We use cookies on this site to improve your experience as explained in our Cookie Policy. You can reject cookies by changing your browser settings.   READ MORE I ACCEPT

This is how the 'snow bear' creator made its belly button

Friday, February 1, 2019, 7:21 PM - There is finally an answer to a mystery that captivated Canadians this week.

CBC News successfully contacted the artist behind the snow bear that appeared this week on Montreal's Lachine Canal, and asked her the question everyone is wondering about: How did the snow bear get its belly button?

The bear was wide — at about 12 feet — making the jump from the bear's outline to its belly button almost impossible. 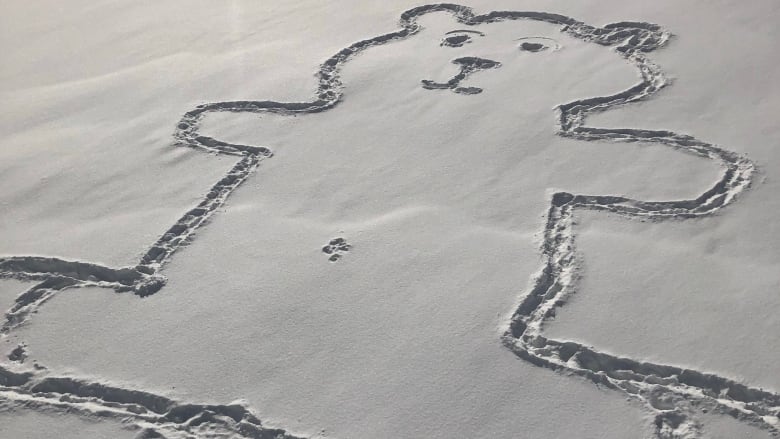 This snow bear appeared on Wednesday morning on the Lachine canal. (Kate McKenna/CBC)

Hundreds of Canadians have sent in theories as to how the bear got its navel — and very few of them guessed the truth.

(RELATED: Instant karma for man who tries to destroy snowman)

It was five snowballs, lobbed successfully into the middle of the bear.

CBC News spoke via text message with Valérie Duhamel, the maker of the snow bear, who said she was surprised by the media attention her creation has received.

"Yes, it was five snowballs thrown in the same place. And I never would have thought my bear would be all over the media," wrote Duhamel.

A number of people following the snow bear mystery reacted to her impeccable aim with awe, impressed that all five snowballs landed perfectly in the centre of the bear.

The bear was made on Tuesday night, and was located near Beaudoin Street in the Montreal neighbourhood of Saint-Henri. Unfortunately, it was destroyed by the wind about 24 hours later.

A spokesperson for the Lachine Canal reminds Montrealers that walking on the canal is illegal in the winter because of safety concerns.

This article was written for the CBC by Kate McKenna.

WATCH BELOW: HOW TO BUILD THE BEST SNOWMAN