Expired News - This immense, hi-res picture of Pluto will amaze and astound - The Weather Network
We use cookies on this site to improve your experience as explained in our Cookie Policy. You can reject cookies by changing your browser settings.   READ MORE I ACCEPT

News
Editor's Choice
Why is ice so slippery?
New Pluto pictures show a snakeskin like terrain.
OUT OF THIS WORLD | Science Pics of the Week

This immense, hi-res picture of Pluto will amaze and astound

Friday, September 25, 2015, 4:54 PM - Get ready to be astounded by a new mega-sized, mega-detailed image of Pluto, see what Hubble saw when it aimed at the "shrapnel" from an exploded star, and check out what the equinox looks like from space. It's Science Pics of the Week!

In the weeks since the image stream was opened up from NASA's New Horizons spacecraft, we've seen some impressive close-up views of Pluto's surface and some incredible flyovers constructed from the data received.

Behold the most recent addition to the collection:

The detail and colour variation seen in this image are incredible. However, for an exceptional treat, click on the image and prepare to be amazed as the immense, 8000px by 8000px version opens up. Once you're there, zoom in on the image and pan around, to take in the astounding detail of this only recently-visited world.

The newest high-resolution images of Pluto from NASA’s New Horizons are both dazzling and mystifying, revealing a multitude of previously unseen topographic and compositional details. The image [above] -- showing an area near the line that separates day from night -- captures a vast rippling landscape of strange, aligned linear ridges that has astonished New Horizons team members.
“It’s a unique and perplexing landscape stretching over hundreds of miles,” said William McKinnon, New Horizons Geology, Geophysics and Imaging (GGI) team deputy lead from Washington University in St. Louis. “It looks more like tree bark or dragon scales than geology. This’ll really take time to figure out; maybe it’s some combination of internal tectonic forces and ice sublimation driven by Pluto’s faint sunlight.”
The “snakeskin” image of Pluto’s surface is just one tantalizing piece of data New Horizons sent back in recent days. The spacecraft also captured the highest-resolution color view yet of Pluto, as well as detailed spectral maps and other high-resolution images.

Hubble zooms in on shrapnel from a stellar explosion

Thousands of years ago, some 1,400 light years away from Earth, in what would eventually be named the constellation Cygnus, a massive star reached the end of its "life" and exploded in a spectacular supernova.

Our only evidence of this stellar cataclysm is the presence of what is known as the Veil Nebula, shown below in the latest close-up image taken by the Hubble Space Telescope. 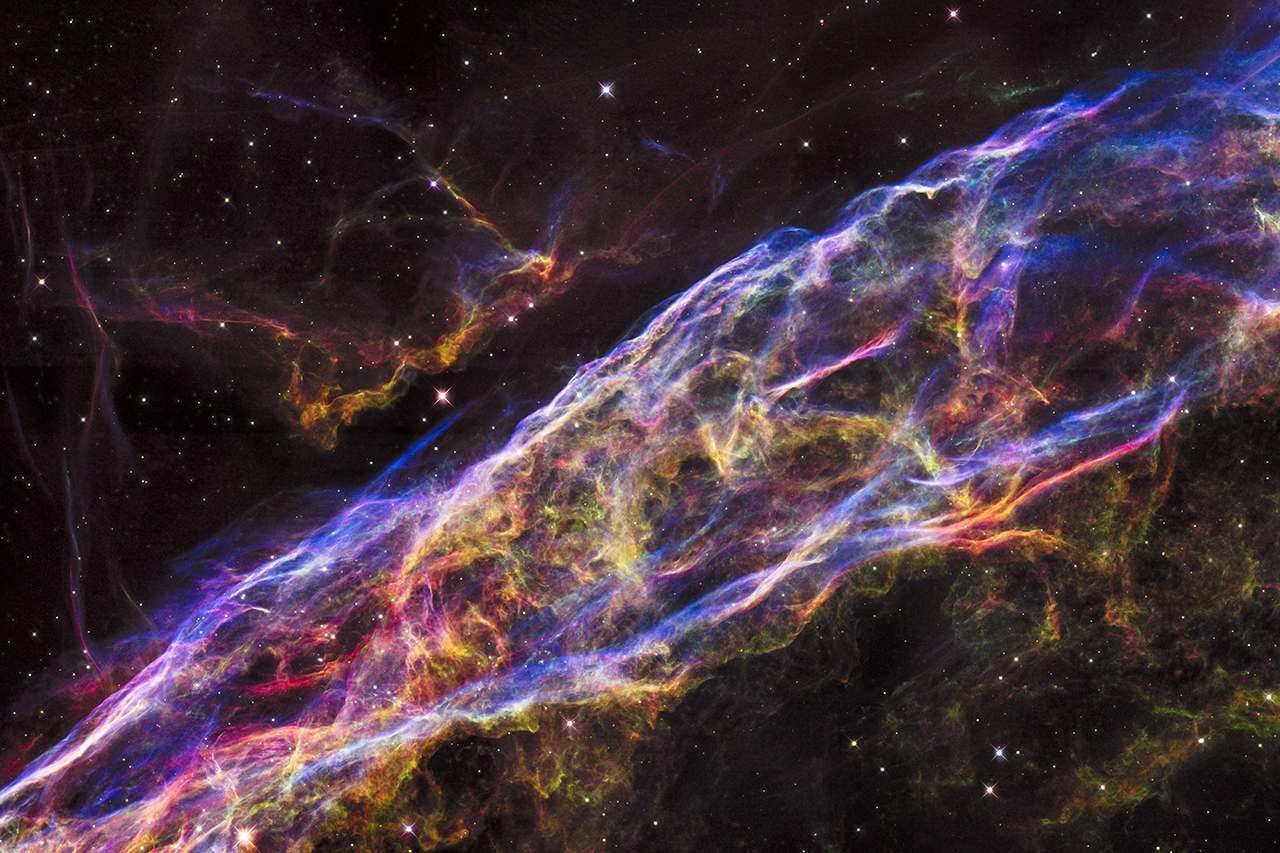 What's even better, though, is the Hubble team has produced a 3D simulation of what it would look like to zoom in and pan past the Nebula.

This 3-D visualization flies across a small portion of the Veil Nebula as photographed by the Hubble Space Telescope. This region is a small part of a huge expanding remnant from a star that exploded many thousands of years ago. Hubble resolves tangled rope-like filaments of glowing gases. The 3-D model has been created for illustrative purposes and shows that that the giant bubble of gas has a thin, rippled surface. It also highlights that the emission from different chemical elements arises from different layers of gas within the nebula. In the imagery, emission from hydrogen, sulfur, and oxygen are shown in red, green, and blue, respectively.

A space-view of Earth's equinox and beyond

Earth's 23.4 degree axial tilt - the property of our planet that gives rise to the seasonal cycle we experience each year - is sometimes difficult to visualize as we stand here on the surface.

Fortunately, we have satellites in orbit of the Earth, such as EUMETSAT - in geosynchronous orbit over the prime meridian - to provide us with a whole new perspective on these phenomena.

This video actually tracks more than just the equinox, as it reveals the day-by-day transition from one fall equinox to the next, showing how Earth's tilt causes the angle of sunlight to change throughout an entire year.