Expired News - How the Great Lakes contribute to dangerous wintry weather - The Weather Network
We use cookies on this site to improve your experience as explained in our Cookie Policy. You can reject cookies by changing your browser settings.   READ MORE I ACCEPT

How the Great Lakes contribute to dangerous wintry weather

Monday, October 15, 2018, 6:10 PM - Get ready, southern Ontario! A wintry mix of weather, mid-week, is going to set up the perfect ingredients for bands of lake effect snow to develop. Here's the recipe for whipping up this weather phenomenon.

With a low pressure centre moving across Ontario during the first half of this week, bringing a mix of chilly, rainy and blustery conditions, Weather Network meteorologists have spotted conditions developing that will be perfect for producing lake effect snow bands off of Lake Huron and Georgian Bay.

What exactly are these conditions, though, and why do they matter?

The very first ingredient for lake effect snow is the lake, or specifically the water in the lake. Even more specifically, though, is that we need warm lake water - at least warm enough that the surface remains liquid, but the warmer the 'better'.

Right now, lake water temperatures are around average for this time of year, at around 12-13°C. 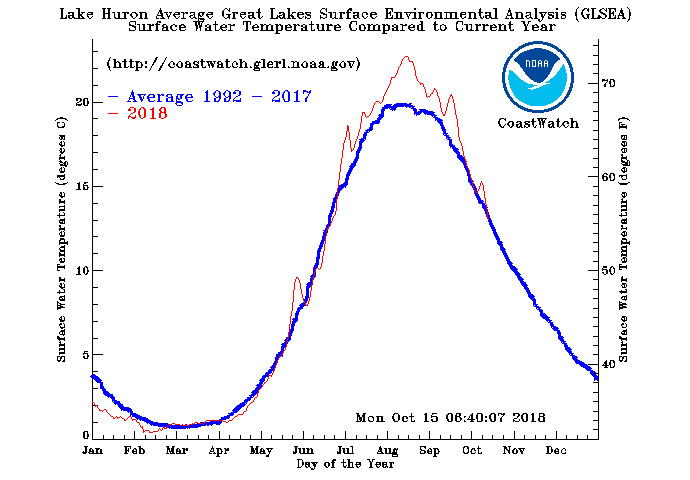 Lake Huron average surface water temperatures for 2018, up to October 15, compared to the average for 1992-2017. Credit: NOAA GLERL

Partly this is because the water acts as a source of heat and water vapour, so if the surface freezes over, that source is cut off. For a complete answer to this question, however, we need to take a look at the next ingredient.

Paired with warm lake water, we need wind blowing over that water, specifically a cold wind, with an air temperature below freezing, and (as stated above) at least 13 degrees colder than the water temperature.

WATCH BELOW: LAKE-EFFECT SET UP AND LOCATIONS

This temperature difference provides a strong impulse for the warm, moist air just above the water's surface to rapidly rise, and produce moisture-laden clouds that the winds can then carry over land.

Also, the winds need to be blowing at the right speed - not too lightly or too strongly. If the prevailing winds are too light, the warm lakes will set up a land breeze situation (warm air over the lakes rises, winds near the lake shore blow from the land to the water), which will disrupt the on-shore flow of air needed for squalls. If the prevailing winds are too strong, though, the flowing air will only pick up a limited amount of water vapour from the lake surface, thus limiting how much is available to produce clouds and snow.

Just having cold winds blowing at the right speed over warm waters isn't quite enough, though. The winds must satisfy three more requirements. The first is that there must be a deep flow of arctic air.

Since lake effect snow squalls are a local convective type of precipitation - that is, they don't occur right along the line of a weather front - the layer of cold air that is flowing over the lakes needs to be sufficiently deep to allow a good amount of convection.

Thus, the warm, water vapour-laden air that rises off the lake surface, into the cold flow of air, must have a sufficient vertical distance it can rise, in order to cool down enough to produce clouds, and cool even further to produce the snowflakes that will eventually fall to the ground. Typically, this means a cold layer at the surface that is between 1,200 and 1,500 metres thick.

If the cold layer is more shallow, due to the presence of a low level temperature inversion, the convection of the warm air from the lakes may start off strong, but it will be cut off before it can really get going. You may see some cloud bands out of this situation, but any snowfall that does happen will be only be scattered and light.

With a deep layer of cold air flowing over warm lake water, at the right speed, we're getting the ball rolling, but we're still missing the second condition, which is low directional shear.

In meteorology, directional shear is a term that describes how the wind direction changes between the surface and a point higher up in the atmosphere. It's counterpart, velocity shear, is how the wind speeds change with height.

Velocity shear doesn't have too strong of an effect on lake effect snow squalls, but directional shear does. The more the winds are lined up with one another with height (low directional shear), the more 'focused' the weather conditions are, delivering heat and moisture from the water directly into the clouds in a thin band, and thus the stronger the potential is for heavy snow squalls from those cloud bands.

The greater the directional shear is, the more spread out the snow will be. Significant snowfall can still occur in this case, but it will not be concentrated along specific bands.

Now, if we have warm lake water, a deep flow of cold air, at least 13 degrees cooler than the water, blowing at the right speed over the lake, and those winds are well-aligned with height, we need only one final component: Sufficient fetch.

Fetch is simply the straight-line distance of uninterrupted lake water surface that the winds blow over before they flow onshore, and it basically defines exactly how much water vapour the winds can pick up off the lake surface, to turn into clouds and snow.

If there's only a short fetch, such as when winds are blowing from west to east across the southern part of Lake Huron (between White Rock, MI and Goderich, ON, for example), significant snow squalls are unlikely. Move just 40 km or so further to the north, however, to Point Clark, where the westerly winds can also tap into Saginaw Bay as a source, and the chance increases.

In general, weather forecasters start to consider the potential for lake effect squalls when all the other components are present, and the winds have a fetch of around 75 kilometres. With a fetch of over 100 km, they start talking about heavy snow squalls.

With that combination - a deep layer of cold air, at least 13 degrees cooler than the lake water it is flowing over, blowing at the right speed, with winds lined up in the same direction with height, and blowing from a direction that gives the air sufficient access to the lake surface - we have all the right ingredients for lake effect snow squalls.

From there, the exact temperatures, wind speed and direction, and fetch distance - along with consideration for any up-slope flow as the winds come on shore, and what kind of terrain they flow over after - will determine just how bad the squalls are, and who gets the worst impact from them.