Expired News - Bird thought to be wiped out by hurricane sighted in Bahamas - The Weather Network
We use cookies on this site to improve your experience as explained in our Cookie Policy. You can reject cookies by changing your browser settings.   READ MORE I ACCEPT

Bird thought to be wiped out by hurricane sighted in Bahamas

Researchers have captured images of one of the rarest birds in the Western Hemisphere — a species they feared was extinct after Hurricane Matthew hit the Bahamas about two years ago.

A team from the U.K.'s University of East Anglia, masters students Matthew Gardner and David Pereira, were several weeks into a difficult, three-month expedition through a pine forest when they caught sight of the endangered Bahama Nuthatch.

The pair set out in April to find the elusive species on Grand Bahama, the only known home of the Bahama Nuthatch, in an area filled with rash-inducing poisonwood bushes.

"[The skin irritant] just leaches into your clothes," Gardner told CBC News. "It was a worthwhile and rewarding experience, but it was certainly very hard."

There had been virtually no sightings following the damaging storm that hit the caribbean island in October 2016, despite a number of surveys, and that was a key reason for launching the search.

Past surveys generally consisted of stopping along a trail in a vehicle, but the UEA students were willing to go off-trail into isolated areas, where they endured thunderstorms, sweltering heat, biting insects and constant itching due to poisonous plants.

Their luck changed at the end of May, after Gardner and Pereira had walked 400 kilometres.

They heard a Bahama Nuthatch respond to their repeated burst of calls with its own high-pitched warble and they were able to capture video of it perched in a mature pine tree, which the birds prefer for nesting. The next images included photographs. 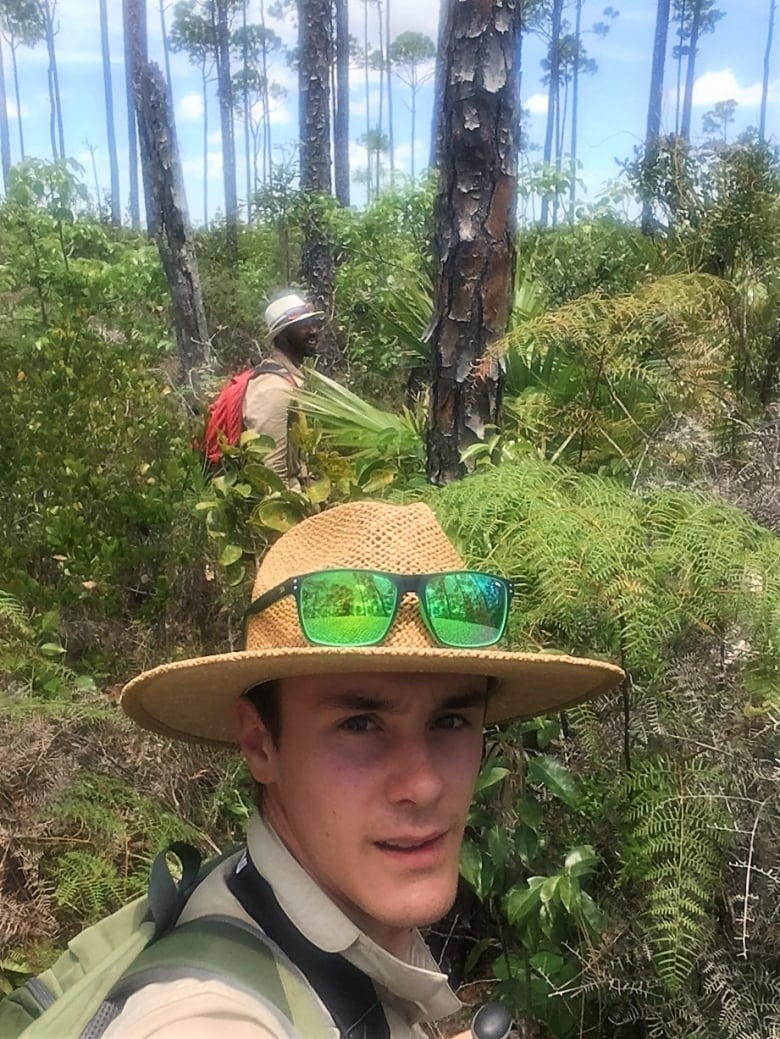 'I HAD ALMOST LOST HOPE'

"We had been scouring the forest for about six weeks, and had almost lost hope, Gardner said. "Then, I suddenly heard its distinctive call and saw the unmistakable shape of a Nuthatch descending toward me. I shouted with joy, I was ecstatic."

"The photographs clearly show this distinctive species and cannot be anything else," said Michael Parr, president of the American Bird Conservancy.

The UEA team made six Nuthatch sightings in total in May and June, and during that breakthrough, the Bahama Nuthatch stuck around for a minute or two.

"I sadly think, and this is the opinion of all the people we spoke to, that it's connected to one bird, due to all these sightings being in a very small compacted area," Gardner said.

A second team of Bahamian students, led by Zeko McKenzie of California's Loma Linda University, began a survey shortly after the UEA team and made five sightings in the same area of forest, including a sighting in May of what they said were two birds together.

The UEA is confidant the other team spotted a pair of the birds, although McKenzie's team only captured footage of a single Bahama Nuthatch.

"The other team have claimed to see two together, so that is promising. However, these findings place the species on the verge of extinction and certainly amongst the world's most critically endangered birds," Gardner said.

SLIM CHANCE OF A SPECIES REBOUNDING

"We also don't know the sex of the birds. In many cases when birds dwindle to such small numbers, any remaining birds are usually male," he added.

Diana Bell, a conservation biologist at the UEA, said researchers believe the chances of bringing this bird back from the brink of extinction are "very slim, due to the very low numbers left," and because they're not certain of the "precise drivers for its decline."

The population decline likely began in the 1950s due to logging, but the birds were still commonly found on Grand Bahama in the 1970s.

However, a survey conducted in the 1990s suggested the numbers may have declined by as much as 90 per cent, which Gardner said is "obviously very alarming."

Habitat loss is thought to be the main reason for the decline. This is partly due to the burning of waste in wooded areas to counter the high cost of getting rid of it. Some of the loss can be blamed on campfires.

The corn snake, an invasive species thought to have come from Florida to Grand Bahama decades ago, may have also played a role in reducing the Nuthatch population.