Expired News - Puffin thanks man that saves him by biting him - The Weather Network
We use cookies on this site to improve your experience as explained in our Cookie Policy. You can reject cookies by changing your browser settings.   READ MORE I ACCEPT

Puffin thanks man that saves him by biting him

In many ways, the Monday tour with Northland Discovery Boat Tours in St. Anthony was as expected: a humpback's tail slap here, a full-body whale breach there.

But one creature — a tiny puffin — made the day extra special.

The boat was only a couple of minutes outside of St. Anthony when crew member Steve Sheppard noticed something in the water.


"First thing that caught my eye was the red bag, one of these shrimp bags at the surface," Sheppard said.

It wasn't unusual to see the bag, but this one looked like something was dragging or tugging on it, he said.

"When we got a little closer I could observe a puffin trying to swim away from the bag, but he was towing the bag. It looked like he was attached by its feet."

It was surprising to see a puffin on the tour, Sheppard said. There aren't as many of the birds around St. Anthony as in other parts of the Newfoundland, and they're more commonly seen on foggy days than on sunny ones.

This puffin was sitting on the surface of the water, as the birds often do, but its feet were stuck in the shrimp bag, Sheppard said. 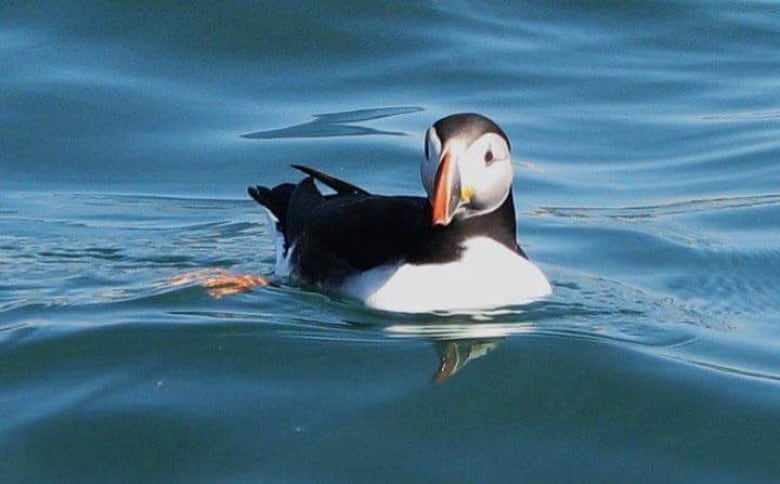 Puffins are better at diving than flying, unless they have a bag stuck to their feet. (Submitted by Edith McCormack)

The bird tried to dive — puffins, like other birds in the auk family, are better divers than fliers — but couldn't go very deep because of the bag.

The boat got closer to the bird, so captain Terry Simms grabbed a gillnet to try to help the bird out.

"I steamed the boat along by the side of the puffin, and [Simms] put the dip net into the water," Sheppard said.

The bird wasn't especially eager to be scooped up, but the captain managed to get him and brought him on board to help him out.

FIRST PUFFIN ON BOARD IN 21 YEARS

Perhaps understandably, the puffin was not immediately thankful for the help. In the photo shared by Northland Discovery on Facebook, the bird is biting its rescuer's finger.

"He was probably was fairly stressed, yeah," Sheppard said.

A guest had a pocket knife and a pair of scissors on hand, and was able to help cut the line of the bag away from the bird's feet. The guests got a short moment to observe the bird up close, and then he was released back to the water.

"They were thrilled," said Sheppard, who noted that it was the first time in 21 years of operation that there had been a puffin on board of the boat.

"To actually have one on board was a pretty neat experience."