Expired News - Scientists spy most massive structure in the early universe - The Weather Network
We use cookies on this site to improve your experience as explained in our Cookie Policy. You can reject cookies by changing your browser settings.   READ MORE I ACCEPT

Scientists spy most massive structure in the early universe

Thursday, October 18, 2018, 5:17 PM - An international team of astronomers using the European Southern Observatory's Very Large Telescope has uncovered the largest and most massive structure ever found in the early universe.

It's a collection of thousands of galaxies, called a supercluster. The formation is still in its infancy, so astronomers are referring to it as a proto-supercluster. Over billions of years, the galaxies will become more centralized as they are bound by gravity.

While other proto-superclusters have been discovered, this particular one — which they have named Hyperion — is believed to predate them by about three million years. 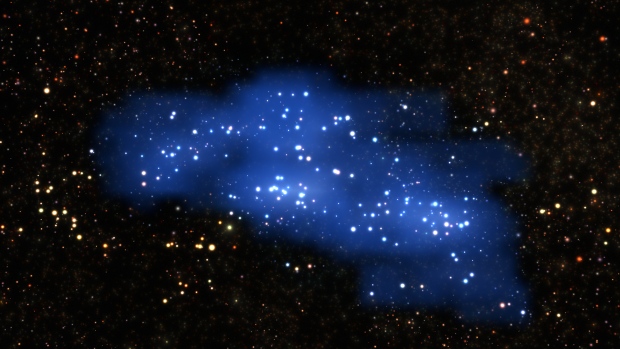 An international team of astronomers using ESO’s Very Large Telescope has uncovered a colossal structure in the early universe. This galaxy proto-supercluster, named Hyperion, is the largest and most massive structure yet found at such a remote time and distance. This visualization shows Hyperion and is based on real data. (ESO/L. Calçada & Olaga Cucciati)

Not only that, but this is the most massive structure ever found in the early universe. It's believed the entire system weighs more than one million billion times the weight of our sun.

In April 2018, an early cluster of galaxies (a proto-cluster) was discovered in the same region by a team of researchers including Canadians. Given the name Colossus, the 14 young galaxies were forming stars as much as 1,000 times faster than in our own Milky Way galaxy.

The researchers of that paper said it would likely become part of the most massive structure in our universe. It is contained in this proto-supercluster. 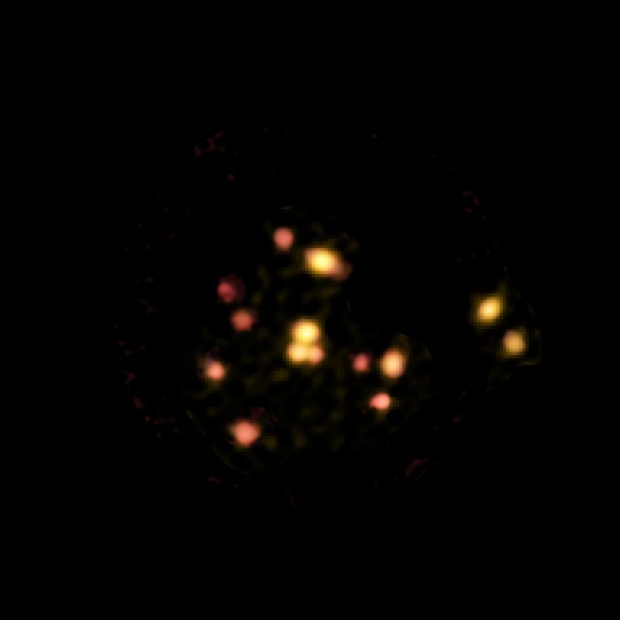 ALMA image of 14 galaxies forming a protocluster known as SPT2349-56. These galaxies are in the process of merging and will eventually form the core of a truly massive galaxy cluster. (ALMA (ESO/NAOJ/NRAO); B. Saxton (NRAO/AUI/NSF))

After the Big Bang, matter in the universe was distributed more or less evenly. But over time, some regions began to collect, or accrete, matter from their surroundings. These became clusters of galaxies and then superclusters.

The universe is packed with clusters and superclusters of galaxies that can hold hundreds to thousands of individual galaxies. Our Milky Way is part of the Virgo supercluster, believed to hold somewhere up to 2,000 galaxies.

This new discovery is important because it helps cosmologists not only better understand the early formation of galaxies, but the early stages of our universe.

"Thanks to theory, we can infer some sort of evolution of the early universe … and we have models that we infer how the evolution of the universe started," said Olga Cucciati of the Istituto Nazionale di Astrofisica (INAF) in Bologna, Italy, who is also the lead author of the study published on Wednesday in the Journal Astronomy & Astrophysics.

"If we are able to say, hey look, you people who prepare these models, you have to put in your models that at this epoch there was a structure as evolved as this one, this will help them … adjust and fine-tune another [model] to fit with our observations."

Though the team of astronomers can't say for certain how many galaxies are contained in the proto-supercluster, it's a lot.

"This is a structure that contains several thousands of galaxies, if not several tens of thousands. It's very huge," Cucciati said. "The unfortunate thing is we could see only a small fraction of them."

It's important to note, however, that the galaxies make up only a fraction of all the matter in the structure.

What we see in the visible universe is only five per cent of what is out there. Dark matter — which we can't see but know exists due to how it interacts with visible matter like galaxies — makes up 27 per cent with dark energy (again, invisible) making up the remaining 68 per cent of the universe. 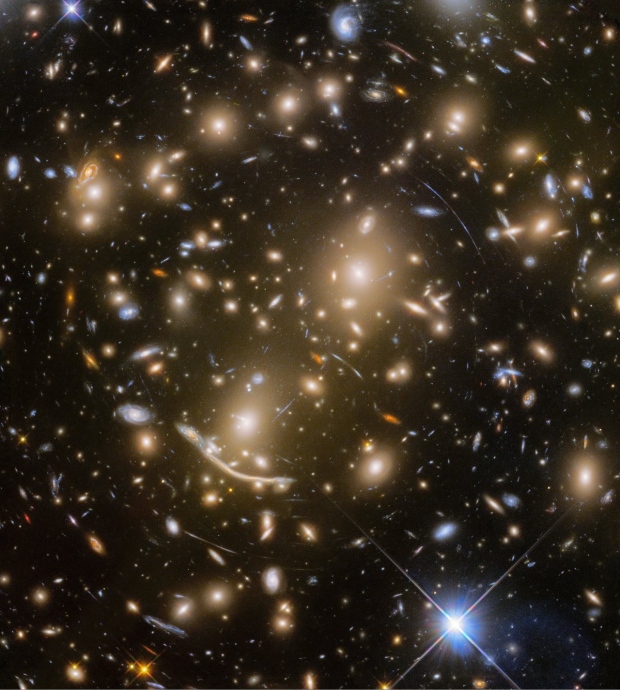 The presence of dark matter can create gravitational lensing, seen here in the distant galaxy cluster Abell 370. The mass of the dark matter bends light of more distant objects, seen as the streaks in this image. (NASA, ESA/Hubble, HST Frontier F)

So the mass that they calculated also includes dark matter.

And that's another exciting part of this discovery: that it tells astronomers about dark matter at an extremely young time in the universe's history.

"You can fine-tune in cosmological models the total amount of dark matter. This discovery might help in understanding …and if you can fine tune it in the very early universe, you can better understand how it evolved in the future," Cucciati said.

"It can help us in understanding things that we do not understand yet in the local universe, thanks to the fact now that we know better how these structures are born."

Article by Nicole Mortillaro. Read the original on CBC.ca