Expired News - It may be time to re-consider what's recyclable - The Weather Network
We use cookies on this site to improve your experience as explained in our Cookie Policy. You can reject cookies by changing your browser settings.   READ MORE I ACCEPT

It may be time to re-consider what's recyclable

Some plastics are still sought after, while others just aren't worth collecting anymore.

Some municipalities continue to accept both kinds anyway, and in certain cases it's ending up in landfill.

"There are a number of materials that are currently being collected that are having difficulty finding recycling markets," said recycling consultant Jake Westerhof.

Westerhof questions why municipalities across Ontario are still accepting plastics that can't be easily sold to domestic recycling facilities.

"We need to have an honest discussion about the long-term viability of these particular plastic types," he said.

'You build it, the market will come.' - Jerry Powell, Resource Recycling magazine

But picking and choosing which kinds of plastic are OK to go into the blue box could just make an already-complex system even more confusing. That could be the last straw for some homeowners, who might just give up on recycling altogether.

"The goal is to make it convenient," said Jerry Powell, executive editor of Resource Recycling magazine.

"If you tell people, 'We take all plastic bottles,' you'll get more of what you're after," he said. "Field of Dreams. You build it, the market will come."

For now, though, the hierarchy remains, and the key to knowing where your recyclables will end up is the number inside the "mobius loop" symbol printed on the plastic. 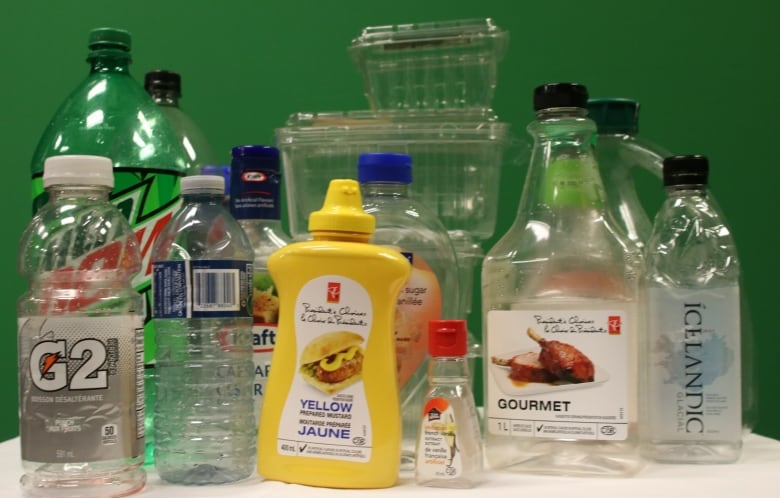 Polyethylene terephthalate (PET) is largely made up of plastic bottles and other food packaging. (Trevor Pritchard/CBC)

"Plastics that have the mobius loop number one and two have the best chance of getting recycled," said Jo-Anne St. Godard, executive director of the Recycling Council of Ontario.

Joe Hruska, VP of the Canadian Plastics Industry Association, said some packaging producers have started replacing products previously made from polypropelene or polystyrene, such as clam shell food packaging, to PET because it is highly recyclable. 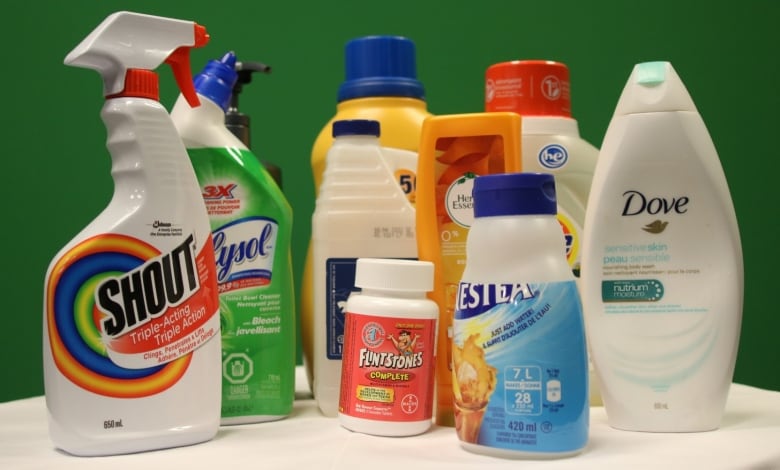 HDPE is mostly made up of cleaning products, laundry detergents and shampoo bottles. (Trevor Pritchard/CBC)

Like Number 1 plastic, HDPE has long been accepted in blue bin programs and has stable and secure local markets.

"The pricing is fairly strong," said Dan Stone, the general manager of Cascades Recovery in Ottawa. "It is down marginally, but not a heck of a lot."

Plastics in categories three to seven have a hard time finding stable markets. Number three, PVC, is among the most difficult to sell, according to Jake Westerhof.

"Recyclers who were involved in those mixed plastics are trying to do some [research and development] to find markets for this, but that's in development," Westerhof said.

PVC packaging has been largely replaced by other resin types that are easier to recycle. 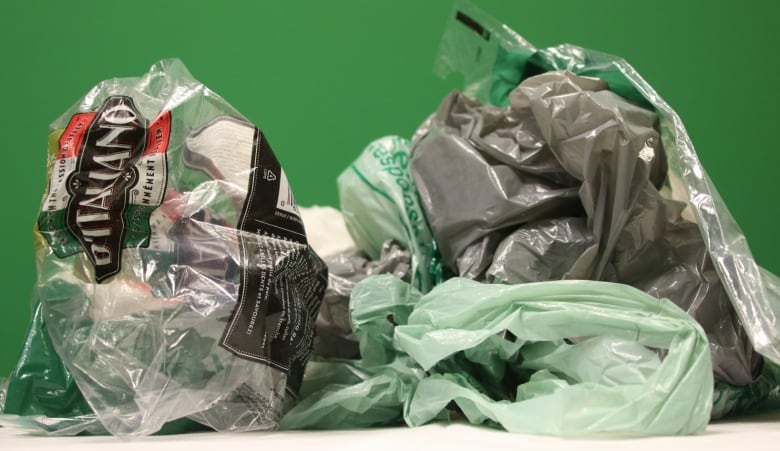 LDPE is used for plastic bags and other food wrapping, as well as some squeezable bottles and dry cleaning bags. (Trevor Pritchard/CBC)

Although LDPE can be recycled, plastic bags are not accepted in Ottawa's recycling because they can get caught in the sorting equipment.

"Bags get hung up on all the gears of the conveyors and everything else. My magazine has reported on so many fires created as they tried to burn the plastic off the gears," said Powell.

Plastic bags can be returned to Take It Back! locations. 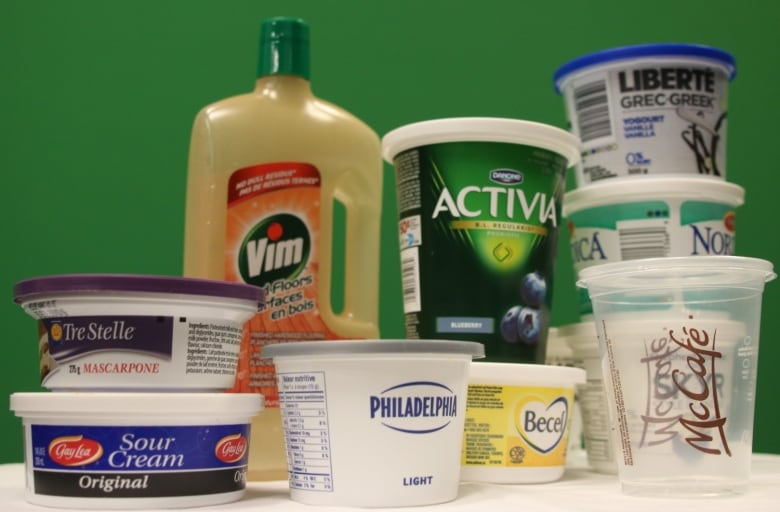 Polypropylene is the best of the bunch in the three-to-seven range. There's also more of it out there.

Powell said this plastic is highly sought after and has a growing market. 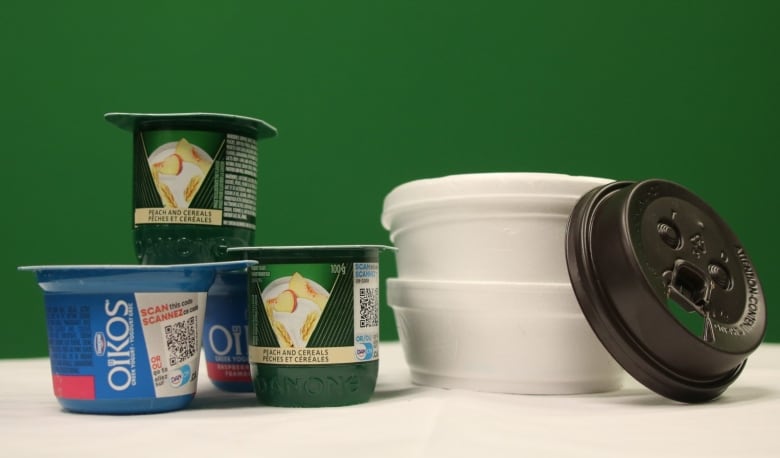 Polystyrene is most recognizable as white styrofoam, but it can also be used to make rigid plastic food containers. (Trevor Pritchard/CBC)

Ottawa accepts only the rigid plastic in the Number 6 category, such as the yogurt pots. But some other municipalities do accept styrofoam,which falls under the same category.

"It's not a market issue, it's a quality issue," said Hruska. "If we can produce good quality there are markets paying $300 to $600 a tonne for that material. And some municipalities are getting that. Others are paying to move it." 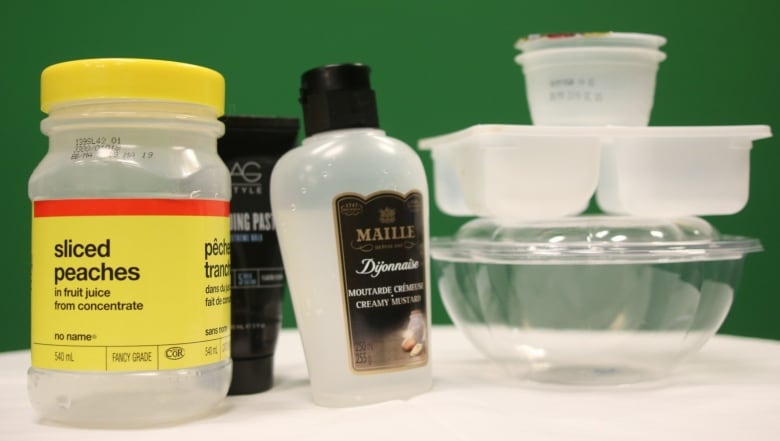 There's a final category of plastic simply called 'other,' which is a grab bag of plastics not found in any other category. (Trevor Pritchard/CBC)

This is the least desirable plastic, according to Jerry Powell.

"If you separate three to sevens, the sevens will probably be landfilled," Powell said.

Ottawa's recycling plant says it has a sustainable market for Number 7 plastic, and none of the plastics accepted in the blue box program is being landfilled.

You can check out the details of Ottawa's recycling program on its website.