Expired News - Philae, the little lost comet lander, has finally been found - The Weather Network
We use cookies on this site to improve your experience as explained in our Cookie Policy. You can reject cookies by changing your browser settings.   READ MORE I ACCEPT

News
Editor's Choice
See what's left of August as summer slowly slips away
Missing for nearly two years, a tiny comet lander has finally been found! A bus-sized asteroid flies past Earth at a tenth the distance of the Moon! Jupiter's auroras sing! It's What's Up In Space!
OUT OF THIS WORLD | What's Up In Space - a weekly look at the biggest news coming down to Earth from space

Philae, the little lost comet lander, has finally been found

Wednesday, September 7, 2016, 1:15 PM - Missing for nearly two years, a tiny comet lander has finally been found! A bus-sized asteroid flies past Earth at a tenth the distance of the Moon! Jupiter's auroras sing! It's What's Up In Space!

The search of the surface of comet 67P/Churyumov-Gerasimenko was exhaustive. The research team listened intently for any sign of the lander's signal, to trangulate its location. Try as they might, however, the exact resting place of Philae remained a mystery, until now.

In images taken of the comet's surface on September 2, 2016, the Rosetta team finally located the little lander! 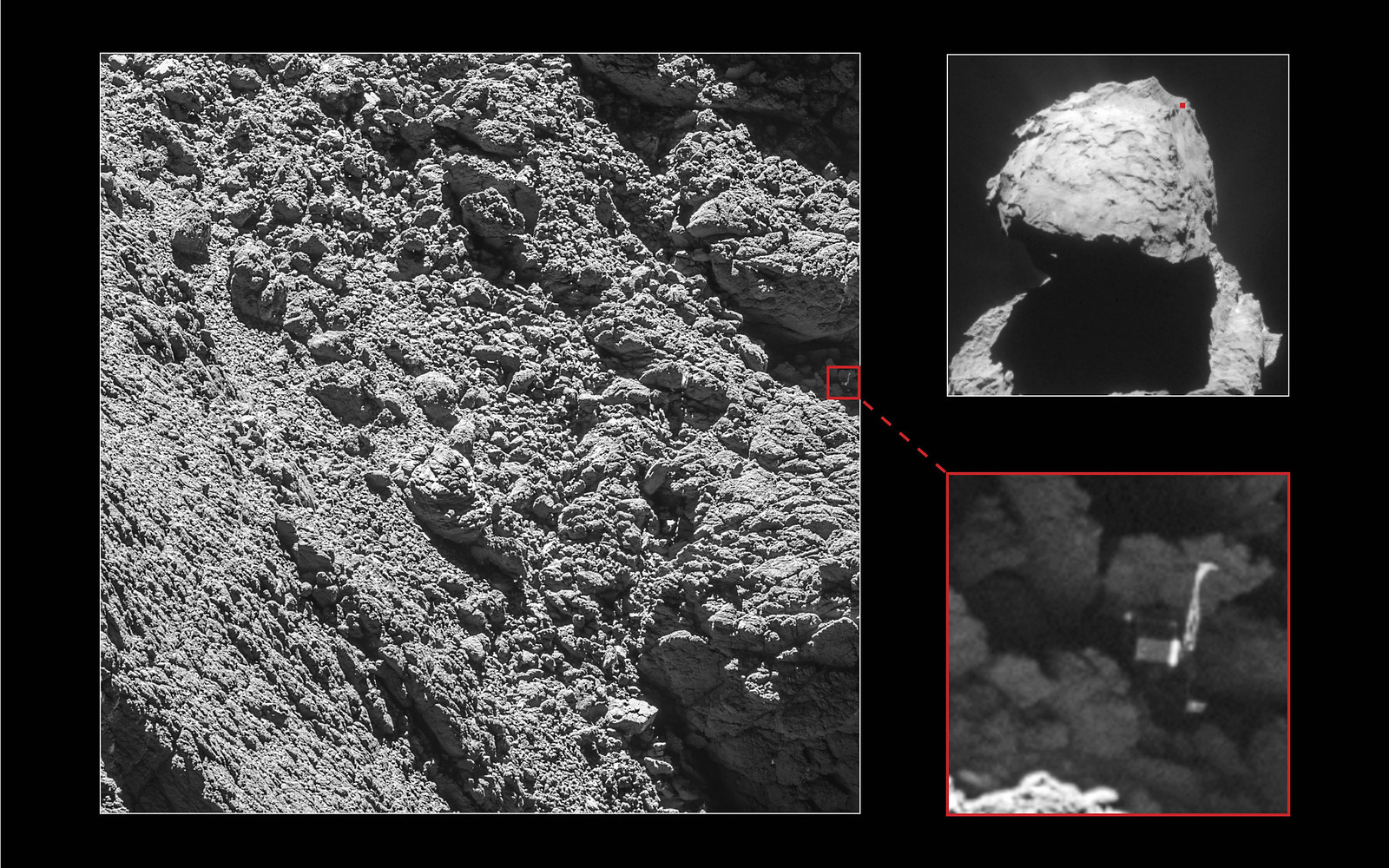 Three views of Philae's location. A wide-view of the smaller of 67P/Churyumov-Gerasimenko's two lobes (top right), a close-up of the specific sector of the Abydos region (left) and a zoomed in look at the lander. Credit: Main image and lander inset: ESA/Rosetta/MPS for OSIRIS Team MPS/UPD/LAM/IAA/SSO/INTA/UPM/DASP/IDA; context: ESA/Rosetta/NavCam 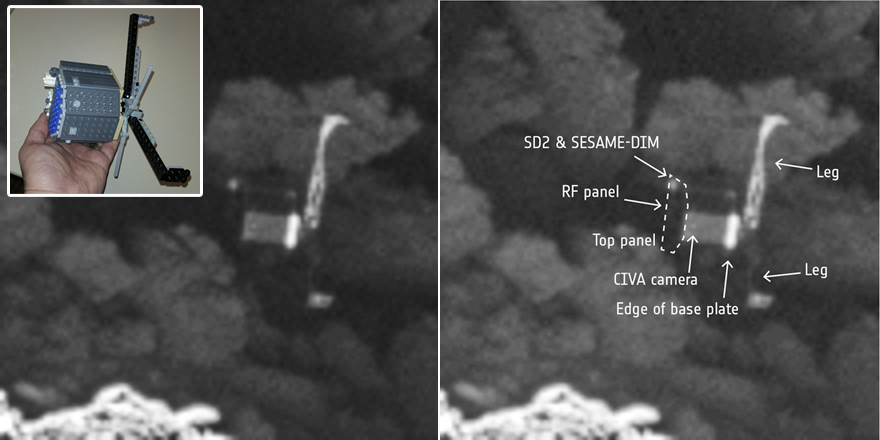 "After months of work, with the focus and the evidence pointing more and more to this lander candidate, I’m very excited and thrilled that we finally have this all-important picture of Philae sitting in Abydos," Rosetta team scientist Laurence O’Rourke, who coordinated the search for Philae, said in an ESA press release on Monday.

"With only a month left of the Rosetta mission, we are so happy to have finally imaged Philae, and to see it in such amazing detail," Cecilia Tubiana of the OSIRIS camera team, who was the first person to see the images that finally captured Philae in its new home, said in the statement.

That's right, there's now less than one month left for the Rosetta mission, so the timing of this find couldn't be more perfect. On September 30, the orbiter will make a controlled touchdown on the surface of comet 67P/Churyumov-Gerasimenko. This will allow the team to gather extreme closeup images of the comet's surface as the spacecraft descends, which will add to the science returned from the mission. The spacecraft, however, is unlikely to survive its ultimate touchdown.

Earth gets a close asteroidal shave

There are plenty of asteroids out there in space, and every once in awhile, one of them swings past the Earth a bit closer than the rest. 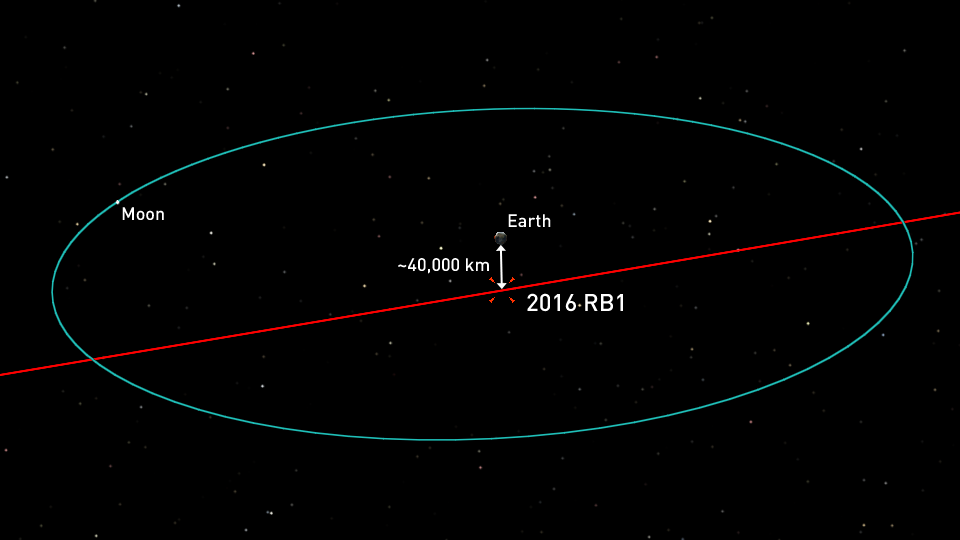 The asteroid's orbit took it on a path just outside the orbit of the ring of geosynchronous weather and communication satellites that circle Earth at around 35,000 km out. Even if it had come a bit closer, however, it still would not have posed any danger to satellites or to us, because its orbit carried it below Earth and below the orbit of the Moon.

The passage of 2016 RB1 through the Earth-Moon system, from above (left) and from "behind" Earth (right). Credit: Celestia/S. Sutherland. Data via NASA's Jet Propulsion Laboratory.

Survey missions are constantly on the lookout for these visitors from space, and 2016 RB1 - due to its size - was only discovered two days before its flyby, on Monday, Sept 5, 2016.

This particular flyby acts as a coincidental herald for the launch of OSIRIS-REx - Origins, Spectral Interpretation, Resource Identification, Security, Regolith Explorer - will be lifting off from Cape Canaveral in Florida on Thursday, September 8. The spacecraft's 7-year mission will be to travel to the near-Earth asteroid known as 101995 Bennu, where it will map the asteroid's surface, determine its composition, and test various mitigation techniques, before gathering a small sample from Bennu's surface and returning with that sample to Earth in September of 2023.

The first launch window for the mission opens at 7:05 p.m. EDT, September 8. Tune in to watch!

It sounds like something out of a Disney classic on the surface, but the intense auroras that surround Jupiter's polar regions actually sing!

Technically, the "sounds" produced here are magnetic data collected by the Juno spacecraft, which has then been converted into sound, similar to what NASA scientists did with the magnetic data returned by Voyager 1, that allowed us to listen to the "sounds of interstellar space."

Juno just completed the first of its orbits around Jupiter a few weeks ago, and has been returning amazing images.

Stand by for more to come!