Expired News - Peoples Climate March protest targets Trump's 100th day - The Weather Network
We use cookies on this site to improve your experience as explained in our Cookie Policy. You can reject cookies by changing your browser settings.   READ MORE I ACCEPT

News
Editor's Choice
Official 2021 Fall Forecast release, HERE
Trump administration is the most anti-environmental and pro-polluter in our history.

For the second Saturday in a row, protesters around the world took to the streets to draw attention to a growing global crisis.

The Peoples Climate March brought thousands of protesters to D.C.'s National Mall on a day of record-breaking warmth in the U.S. capital, coinciding with the 45th president's 100th day in office. Sister-marches took place in more than 300 locations worldwide.

While both were scheduled around global events linked to Earth Day, unlike last week's March for Science, the Peoples Climate Movement takes a more highly-politicized stance on their protest. On their official website, they cite the need to "call out the politicians who threaten our climate, communities, and jobs."

What does 150,000 people in the streets of DC marching for climate, jobs & justice look like? Well, this is...part of it. #PeoplesClimate pic.twitter.com/zAWIfgYinE

One of the goals of Saturday's march, according to a Global News report, was to drum up support for candidates with a strong background in environmental policy as the U.S. heads toward 2018's midterm elections and the 2020 presidential race.

The first Peoples Climate March took place in September 2014, and brought 400,000 people to the streets of New York City to urge world leaders to act on New York City.

This latest protest comes as the EPA - the United States Environmental Protection Agency - has removed its webpage about climate change while it and the rest of the agency's site are 'retooled' to better fit with the vision of the new administration. 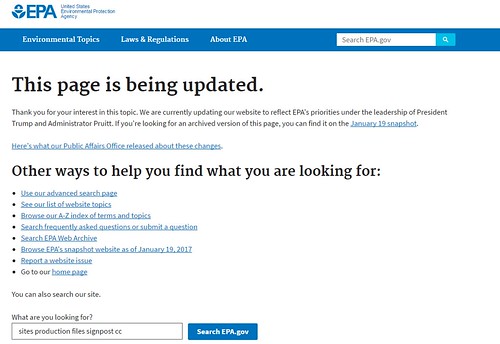 A previous snapshot of the site was made available after the site was disabled late on Friday. In the past, the site was a go-to for data on greenhouse gas emissions and the health impacts of climate change.

The Trump administration has already called for significant changes to the country's environmental policies, including drastic budget cuts for the EPA and lifting the ban on hunting hibernating bears. Trump has also expressed an interest in having the U.S. withdraw from the Paris Agreement; an accord in which nearly 200 countries committed to cutting carbon emissions.

All in all, it's been an active, convoluted week for the politics of climate change south of the border, as Friday saw the controversial initial op-ed column for the New York Times from Pulitzer Prize-winning journalist Bret Stephens - an author who's been noted for his hard-line denial of climate change science.

The article, which suggests scientists' certainty about climate change is what turns Americans away from talking about it, faced immediate criticism from many, including others at the New York Times itself.

Watch below: Are the Paris Agreement goals even possible for Trump's administration?