Expired News - Overdue natural disasters that could happen in our lifetime - The Weather Network
We use cookies on this site to improve your experience as explained in our Cookie Policy. You can reject cookies by changing your browser settings.   READ MORE I ACCEPT

Overdue natural disasters that could happen in our lifetime

Friday, September 28, 2018, 2:10 PM - Natural disasters happen all the time but some seem to have missed their cue, which could be extremely worrisome and spell catastrophic trouble.

Many of us have heard of the supervolcano under Yellowstone National Park that could potentially erupt anytime now and spread ash over 800 kilometres (500 miles) that would kill many crops in North America, trigger crisis situations for the food supply chain and health care systems, and dramatically cool global temperatures. Every few months an alarming article will pop up online triggering panic and speculation about if or when this supereruption will come - and how we will deal with the destruction.

This is one example of many catastrophic natural disasters that are calculated to have already happened based on historical data and recurrence intervals - read below for seven more overdue natural disasters that could cause mass migrations, wipeout economies and technological infrastructure, and reshape societies.

The notoriety of the San Andreas fault (partly due to Dwayne "The Rock" Johnson's role in San Andreas) makes this one of the most well-known fault lines in the world. A study published in 2006 reported that the San Andreas transform fault (two tectonic plates that move by sliding past each other) has not produced a great earthquake for 250 years despite large amounts of strain building and could be released as a 7.0 magnitude earthquake. The study noted that the recurrence interval for a great earthquake is approximately every 200-300 years, and when the earthquake does strike it will significantly impact the entire state of California, with majority of the damage occurring in the southern regions such as Los Angeles County, San Diego County, and Orange County.

Every city has a handful of natural disasters that occur relatively regularly, and for Californians it's earthquakes. While they are a normal part of life and most of the time don't cause too much trouble, San Francisco's Hayward Fault has been quieter than expected. The most destructive earthquake in California's history occurred along this fault line in 1868 and the US Geological Survey has described it as a "tectonic time bomb" because a 6.8-7.0 magnitude earthquake is due at any time. There is a 76 per cent chance that the Bay Area will be hit by a 7.0-magnitude earthquake in 30 years, which would cause vast destruction to the real estate sector, immense damage to densely-populated neighbourhoods, and hundreds of fatalities.

Damage in San Francisco after the 1906 earthquake. Credit: Wikimedia Commons

In 2014 a massive 8.2-magnitude earthquake rocked the northern coast of Chile and sent powerful tremors and aftershocks that required the evacuation of over one million people. This earthquake was significant in size and damage, but it was not "The Big One" that scientists were expecting. Activity in this region was expected based on geological history, but during this earthquake there were regions along the fault line that did not rupture and have not ruptured since 1877. Scientists predict that the amount of strain gathering along the tectonic plate boundary means it is only a matter of time before a 8.8-9.0 magnitude earthquake strikes. 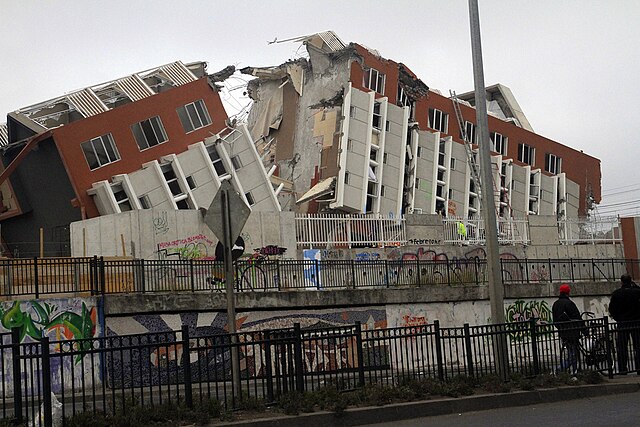 A 20-storey building collapses after an 8.8 magnitude earthquake in 2010. Credit: Wikimedia Commons

In 2011 Japan was hit by an undersea megathrust 9.0 magnitude earthquake that triggered a tsunami towering 10 meters tall and totalled approximately $300 billion, making it the world's most expensive natural disaster. A financial crisis, leakages from nuclear plants, and over 28,000 fatalities left the country considering whether some regions were even worth rebuilding due to their locations in regions that are high-risk for seismic activity. In 2012 the Japanese government stated that there is a 70 per cent chance that another earthquake the size of 8.0-magnitude or greater will happen in the next 30 years and 90 per cent likely that it will happen within the next 50.

An aerial view of damage to Otsuchi, Japan in 2011 after the 9.0 magnitude earthquake and subsequent tsunami. Credit: Wikimedia Commons

Sometimes the greatest damage from volcanoes comes from the spewing ash and lava, but in this volcano's case it's how it will shake up ocean waters. When the unstable Cumbre Vieja volcano erupts it could unleash the biggest tsunami in historic record that will crash through the Caribbean and travel at 800 kilometre (500 miles) per hour all the way to the eastern seaboard of the US, according to a study released in 2001. The volcano's west flank was left particularly unstable after it's last eruption, meaning that the future eruption, which could come within decades, might cause a giant landslide of half a million tonnes of rock crashing into the ocean and trigger a giant tsunami that would reach 500 metres after 5 minutes since the eruption and could reach Florida within 9 hours.

Cumbre Vieja volcano, South is above and North is below. Credit: Wikimedia Commons

The last time an earthquake happened at this fault line in 1700 the entire coastline dropped several feet and created a tsunami. Along the west coast of North America is the Cascadia Subduction Zone, where the Juan de Fuca tectonic plate slowly moves towards and gets shoved below the North American plate (the continent). While this is considered a relatively quiet fault, the Oregon Seismic Safety Policy Advisory Commission predicts that there is a 40 per cent chance that an earthquake of 9.0 magnitude of greater will occur within the next 50 years and has the potential to trigger a catastrophic tsunami and cause over 10,000 fatalities and billions of dollars in damage.

Occasionally the Sun releases plumes of superheated plasma and radiation called coronal mass ejections (CME), which weigh millions of tons and can impact satellites and power grids on Earth during geomagnetic storms. In 1859, 1989, and 2012 CMEs severely disrupted Earth's magnetosphere and disrupted telegraph lines and caused power grid failures, and there is a 12 per cent chance that another will happen in the next decade. Based on the current solar cycle, the next solar storm could be comparable to the record set in 1859, and with the explosion of technological development and infrastructure the potential damage could include: disruption of global banking systems, global positioning system (GPS), international travel, and cybersecurity systems.

A coronal mass ejection (CME) released on August 31, 2012 that traveled at over 1400 kilometres per second and connected with Earth's magnetosphere and caused an aurora. Credit: Wikimedia Commons

WATCH BELOW: THIS is what tsunami sirens sound like in the middle of the night