Expired News - Canadian lab may solve mystery of how life on Earth began - The Weather Network
We use cookies on this site to improve your experience as explained in our Cookie Policy. You can reject cookies by changing your browser settings.   READ MORE I ACCEPT

News
Editor's Choice
Don’t fall victim to these seven dangerous tornado myths
OUT OF THIS WORLD | Earth, Space and Everything In-Between - a daily journey through weather, space and science with meteorologist/science writer Scott Sutherland

Canadian lab may solve mystery of how life on Earth began

Wednesday, October 24, 2018, 8:17 PM - A unique Canadian laboratory, at McMaster University, in Hamilton, Ontario, may be on track towards solving one of the biggest mysteries of our time - how life first began on planet Earth.

Of all the questions that science tackles today, one of the most basic is "how did we get here?"

In the very early days of Earth, back when volcanoes were spewing lava and hot gases, forming the very first rudimentary atmosphere, tiny heated ponds of chemicals, clays and salts were forming, and it is generally thought that it's in these 'Darwin's warm little ponds' that life got its first start on this planet. 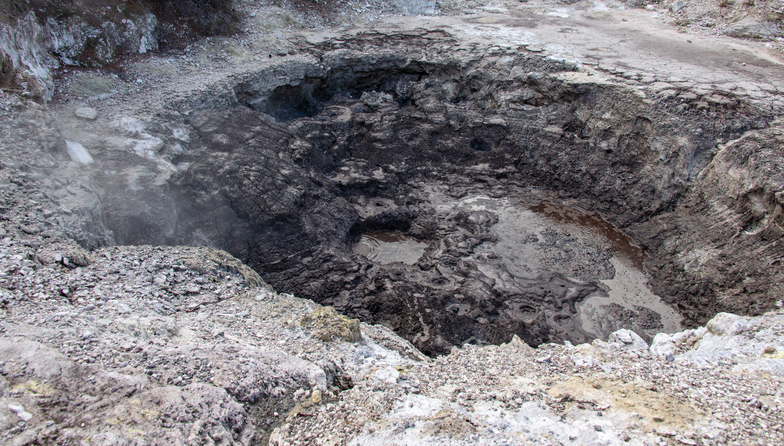 This close up of a mud pool ground in Waiotapu Geotermal Valley, Rotorua, New Zealand, shows the kind of environment where life may have developed on the early Earth. Credit: Getty Images

The problem has been to show how it went from this basic mixture, to actually having living cells with genetic material that they could replicate and pass on to future generations.

Although many attempts have been made to reproduce this, so far, scientists have had limited success. While they have produced the basic chemical building blocks, few, if any, have seen those building blocks develop further, and noone has produced anything that we could call 'alive'.

At McMaster University's Origins of Life Laboratory, however, three researchers - astrophysics professor Ralph Pudritz, biophysics professor Maikel Rheinstadter and biochemistry professor Yingfu Li - have teamed up to design and build the lab's new Planet Simulator, a small chamber that can reproduce the extreme conditions that were present on the early Earth.

Using this unique simulator, they have made a potentially important discovery, which may have brought them a step closer to solving the mystery.

"We have only had the machine for a few months now, but we were very surprised by the results we saw," said Rheinstadter.

"We mixed up some samples that mimic these warm little ponds, we dried them out and we put them in the planet simulator," Rheinstadter explained. "After simulating a summer on early Earth, we already have seen very basic cells forming, and small pieces of RNA form, and they actually go into these very basic proto-cells."

The key to seeing this development isn't just having the right chemicals in the right place, though. The simple interaction of some of the chemicals with water did result in the formation of microscopic pockets - similar to the walls of biological cells, but far more simple - which is a remarkable result, on its own.

The effect of having recurring cycle of environmental conditions - warm and cold, wet and dry - on the molecules that form into RNA, however, appeared to be much more interesting.


Through this simple demonstration, using pipe-cleaners in the place of molecules, Rheinstadter shows how just the random physical rearrangement of these molecules, as their environment goes through cycles of saturation and drying out, and through cycles of hot and cold, can result in them being in the right position to bond together. Furthermore, by the molecules going through repeated cycles, each time the molecules shift around as they become saturated and then dry out again, more and more of them can end up - just randomly - in the right position to bond with those that have previously joined together. Thus, longer and longer chains form over time.

"We ran simulations for an entire summer, about 70 cycles, and we had about 17-20 monomers in the RNA chain," Rheinstadter said. "So, you can assume that if you run for longer, you may end up with RNA polymers with 50, 80 or even 100 monomers."

According to Rheinstadter, human RNA chains contain hundreds of molecules, but they could really be on to something with these results, because it only takes having around 50-60 molecules in the chain for the RNA to become "biologically relevant", which is to say, that it becomes self-replicating.

The importance of self-replicating RNA is that it is the likely precursor for DNA, deoxyribonucleic acid, which is the genetic basis for biological life.

The team is quite careful to emphasize that what they're seeing now are very preliminary results, and they have, in no way, actually created life in their laboratory.

What they have shown, though, is that just with the right mix of chemicals, specifically under the influence of these warm-cold, wet-dry cycles, it appears as though the right precursors for life can develop.

What's next is to confirm that this is what they're seeing, through further testing, but even if they find they do confirm it, there's still a hurdle that must be crossed.

To have actual life, as we know it, develop from these chains of RNA, though, even if they do become self-replicating, requires something more.

"The question is, even if you have life develop in one pool, how does it spread to other pools?" Rheinstadter said. "How did other pools get 'infected' by this life, and maybe, also, different life has formed in other pools, so the mixing of these pools may also play an important role."

According to the researchers, it is possible that these proto-cells developed many times in the early days of Earth, only to die off, such as when their pond was exposed to something toxic, or when it dried out completely and stayed that way.

It took one or more batches of these proto-cells to somehow find a way to spread to numerous ponds, so that they could survive, and develop, and evolve.

WHERE DID WE COME FROM?

So, is life on Earth local, or did it come from somewhere else?

This has been a very interesting question, which has become intertwined with the larger question of how life developed. The chemicals for RNA may have come together in these warm little ponds, and even in other environments on Earth, but how did these chemicals - nucleobases, the chemical building blocks of RNA - get here in the first place?

Did they develop here, from chemical reactions in the water or the air, or did they originate beyond our world?

"To me, it's not at all clear to me that our planet could create these bio-molecules, of itself," Pudritz said. "So, on early Earth, it may have been meteoritic materials. We know that carbonaceous chondrites, those black, oily meteorites, contain these nucleobases, and that's the kind of material we can add to our tiny little ponds, in the planet simulator."

One of the remarkable things about this research is that the Planet Simulator isn't limited to simulating Earth.

Simply by changing the spectrum of light that is emitted into the chamber, the researchers can emulate almost any planetary environment - early Earth, early Mars, the moons of Jupiter or Saturn, or even planets orbiting around distant red dwarf stars. 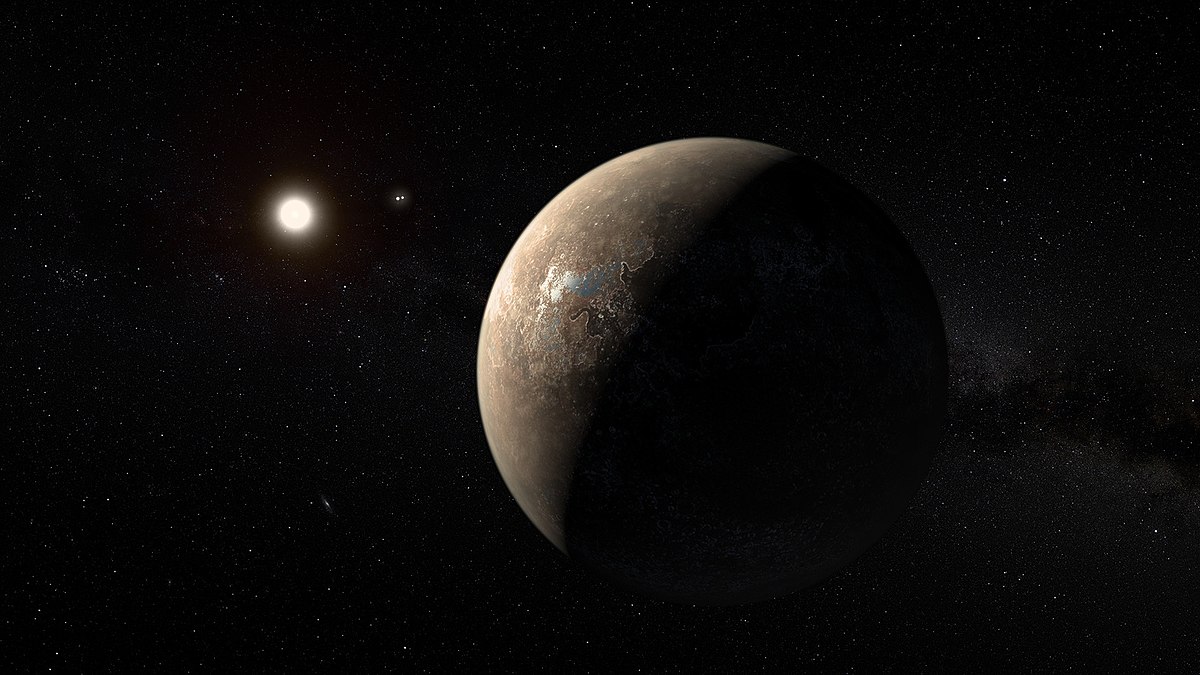 This artist's impression depicts a rocky planet orbiting around the red dwarf star, Proxima Centauri, which is the closest star to our Sun. Credit: ESO/M. Kornmesser

"We can dial up up conditions not only for an early Earth, but for a wide variety of other stars," says Pudritz. "We think that it might be possible to have habitable planets around stars that are a tenth of the mass of our Sun - so called red dwarf stars. Those might be the most typical planets in the galaxy that have life, so we can dial all that up in our planet simulator."

The science of evolution examines how we became what we are today, however in the search for the very origins of life on Earth, at a time when this planet was extremely alien to what we know today, we apparently need a very specific, interdisciplinary combination of sciences, not only to find the answers we're looking for, but also to know what kinds of questions we really need to be asking.

"We developed the Origins Institute, here at McMaster University, specifically with this idea that modern, complex problems of fundamental science now, really do need this interdisciplinary approach," said Prof Pudritz. "You just can't do this kind of work, just as an astronomer, or just as a biophysicist. You need this knowledge of other fields."

In particular, their interdisciplinary approach led to the design of this new, unique Planet Simulator Lab, which was built by Waterloo-based company, Angstrom Engineering, with funding from both McMaster University and a Canada Foundation for Innovation grant.


This interdisciplinary environment has even opened up opportunities for students, as Renée-Claude Bider, a 2nd year undergraduate student, joined the lab to help the trio in their efforts to solve this mystery.

"The research definitely drew me in," Bider, who is in her 2nd year of study in the university's Medical Biological Physics program, explained.

"There isn't a bigger question than where life came from," Bider added, "so it is research that I find really exciting!"