Expired News - Opportunity rover sends back first ever selfie from Mars - The Weather Network
We use cookies on this site to improve your experience as explained in our Cookie Policy. You can reject cookies by changing your browser settings.   READ MORE I ACCEPT

News
Editor's Choice
Look back: September snowstorm that buried the Prairies
OUT OF THIS WORLD | What's Up In Space - a weekly look at the biggest news coming down to Earth from space

Opportunity rover sends back first ever selfie from Mars

Tuesday, February 20, 2018, 3:04 PM - For the very first time, NASA's venerable Opportunity rover has sent back a selfie, and the rover's team has actually 'teleported' a rock from the surface of Mars to their laboratory back here on Earth! It's What's Up In Space!

NASA's Mars Exploration Rover B, also known as MER-B or Opportunity, began its mission on January 25, 2004, when it was set 90 Sols of exploration around Meridiani Planum, a flat, crater-strewn plain near Mars' equator.

On February 16, 2018, the rover 'awoke' to its 5,000th Sol on Mars! With one Sol being one Martian day - equal to one Earth day, plus an additional 39 minutes and 35.244 seconds - that's over 14 years of roving around on the Red Planet. An amazing accomplishment for the solar-powered robot!

In recognition of this incredible milestone, Opportunity's handlers, at NASA's Jet Propulsion Laboratory, in Pasadena, California, planned a little surprise for Sol 5,000.

While Opportunity has taken images of itself in the past, it has done so by using the panoramic cameras atop its mast. By pointing those down at its body, it has snap pictures of its solar panels, to give its NASA handlers an idea of how dusty the rover is (a factor in how much power they will have at their disposal when planning its daily activities). It has never taken a true selfie, like its bigger, more modern and nuclear-powered colleague, Curiosity.

That has now changed! Here is the very first Opportunity rover selfie, captured by the rover on Earth day February 16, 2018. 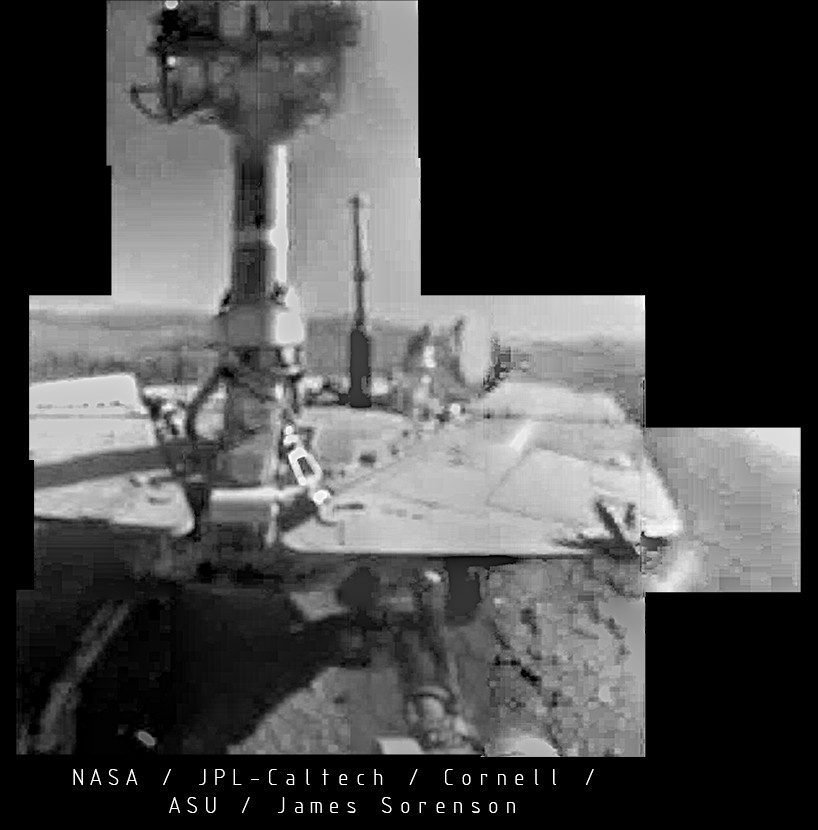 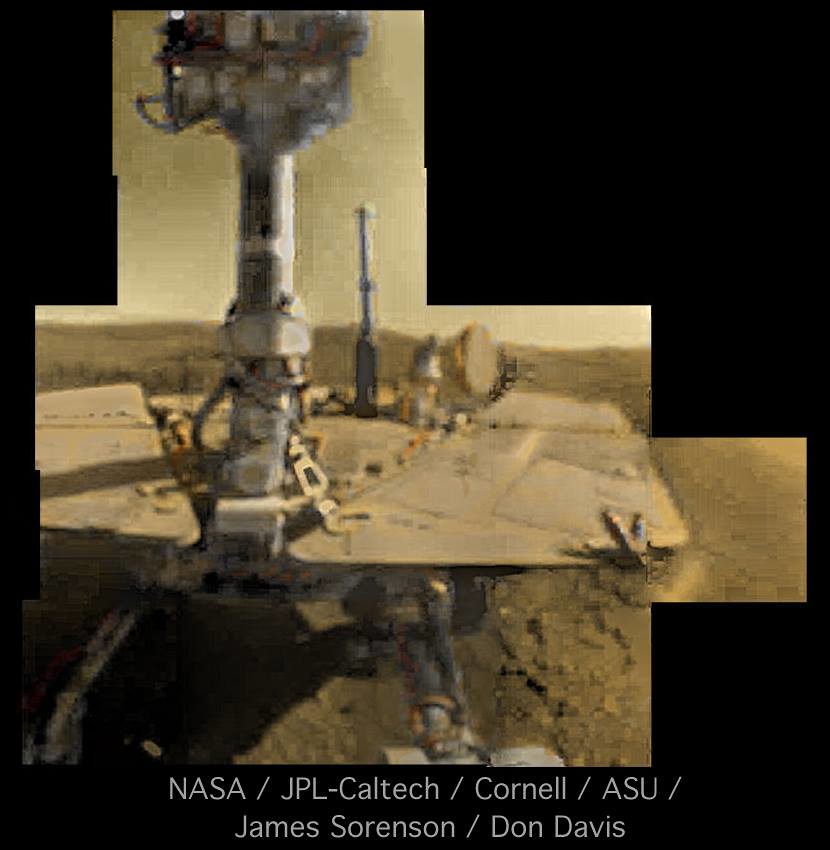 An artificially-colourized version of the selfie, to present it in near true-colour. Credit: NASA/JPL-Caltech/Cornell/ASU/James Sorenson/Don Davis

Curiosity has taken its selfies using its Mars Hand Lens Imager (MAHLI), which is a special camera on the end of the rover's arm, which it uses to get close-up images of rocks and sediment layers. To take a selfie, Curiosity does the same thing we do. It extends its arm out, turns MAHLI around to point at itself, and then snaps a picture - except that it then snaps many, many more pictures, in an overlapping series which covers both the rover and the surrounding area. These images are then transmitted back to Earth, where the rover's team stitches them together into the final selfie image.

Curiosity selfie from Feb 2, 2013, from the rock target known as John Klein. This image, assembled from dozens of small MAHLI pictures, has the rover's arm edited out of the final product, as the arm gets "in the way" for many of the photos. The circular base of the arm is visible near the lower edge of the image field. Credit: NASA/JPL-Caltech/MSSS

Watch the process of a Curiosity 'selfie' below:


Opportunity also has a camera set on the end of its arm, which is known as the Microscopic Imager (MI), but it hasn't been used, up until now, for this same kind of selfie image. This is because MI has one major limitation.

As Emily Lakdawalla, of the Planetary Society, wrote on her blog, Opportunity's MI is "nearsighted".

"Objects at any distance beyond 6 centimetres away are blurry," she said.

This short focal length of MI's camera is the reason why the final seflie, pictured above in black and white, and colourized, are not as good as Curiosity's selfies.

The MI is pictured here, in an image snapped by Opportunity's navigational camera, at the same time that MI was snapping the images for this Sol 5,000 selfie. Also on the end of Opportunity's arm are the Rock Abrasion Tool (RAT), which is used to grind tiny holes into Mars rocks, to expose fresh surface beneath the weathered exterior, so the rover can get a better idea of their composition. Rounding out the trio on the arm is the Alpha Particle X-ray Spectrometer, or APXS, which is used to figure out what elements are present in the rocks and sediments.

A selfie 10 years in the making

"This is something I've wanted Opportunity to do for 10 years," Doug Ellison, the Visualization Producer and Engineering Camera Payload Uplink Lead for both the Opportunity and Curiosity Mars Rovers, at NASA's Jet Propulsion Laboratory, said in a Twitter post. "Long before I worked at JPL. Nine years before I became part of the MER Ops team."

According to Ellison, he even developed an animation of exactly how the rover could take a selfie using the Microscopic Imager, back in 2009. It is very similar to how Curiosity does it.


I even simulated this - just for fun - with crappy animation tools 9 years ago and put it in my visualization showreel back in 2009 - https://t.co/UXPgTQhjLW pic.twitter.com/ooRdENQhCs

Star Trek had the transporter, we've been talking about Quantum Teleportation for a few years now, and for the past several years, scientists at NASA's Jet Propulsion Laboratory have actually been 'teleporting' rocks from Mars to Earth... in a way.

Now, this isn't true teleportation, where they drive the Opporunity rover up to a rock, which dematerializes that rock so that it reappears, whole and intact, here on Earth. It's a bit more simple, and complicated, at the same time.

While Opporunity's Microscopic Image takes passable selfies, it is extremely good at taking close-up images of rocks and sediment layers. So, back in 2009, when Oppy spotted a rather peculiar looking rock resting on the ground nearby, the mission team sent it over for a closer look. 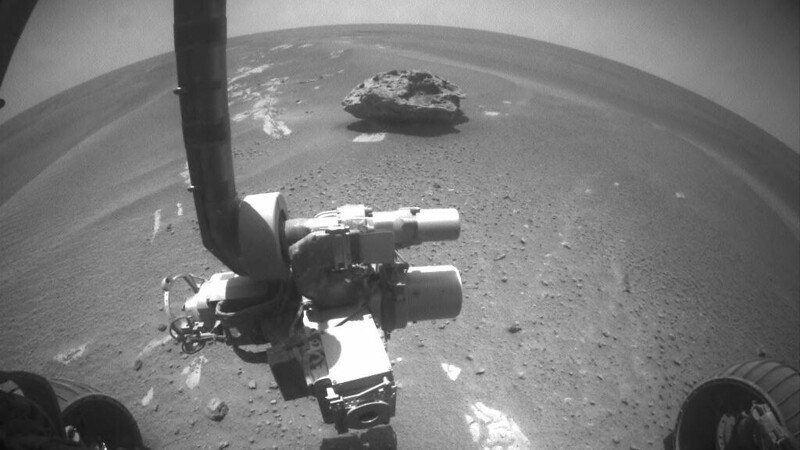 It turned out to be a large iron-nickel meteorite, about two-thirds of a metre wide, which the team named Block Island. After having the rover take details images of it, NASA used that data to 3D print it back here on Earth.

While this is more like replication than true teleportation, because the original rock formation is - presumably - still intact on Mars' surface, teleportation just sounds cooler. The only disappointing part is that the resulting 'teleported' rock isn't made of the same stuff it is on Mars. Still, it gives NASA scientists a real, in-hand reference point to examine when looking at the imagery and data Opportunity sent back.

Watch Below: Opportunity became a teenager in January 2017, and she's been acting like it.