Expired News - One dead, engine failure forces emergency Southwest landing - The Weather Network
We use cookies on this site to improve your experience as explained in our Cookie Policy. You can reject cookies by changing your browser settings.   READ MORE I ACCEPT

Tuesday, April 17, 2018, 4:33 PM - A Dallas-bound Southwest Airlines Co with 148 people aboard made an emergency landing on Tuesday at Philadelphia International Airport after suffering engine failure, and one person died, according to the airline and U.S. officials.

National Transportation Safety Board Chairman Robert Sumwalt told a briefing that one death had been reported, but did not elaborate on the specific circumstances.

Flight 1380 from New York was diverted to Philadelphia after crew members reported damage to one of the aircraft's engines, its fuselage and at least one window, the Federal Aviation Administration said.

"We do have information there was one fatality," Sumwalt said at the media briefing. U.S. commercial airline accident deaths are extremely rare.

Television images showed that most of the outer casing around the left engine of the Boeing Co 737-700 had ripped away and a window near the engine on the plane's left side was missing.

Todd Baur, who identified himself as the father of a passenger from the plane, told Philadelphia's NBC-10 television that a female passenger was injured when she was partially sucked into a window near the afflicted engine before being pulled back into the aircraft by other passengers.

Southwest said the aircraft was bound for Dallas Love Field in Texas from New York's LaGuardia Airport before it diverted to Philadelphia. It did not immediately provide an explanation for the diversion.

VIDEO: HOW A LiDAR SYSTEM WORKS ON AN AIRPLANE


"We are in the process of transporting customers and crew into the terminal," Southwest said in a statement.

A passenger on the flight described feeling the aircraft drop.

"All of a sudden, we heard this loud bang, rattling, it felt like one of the engines went out. The oxygen masks dropped," the passenger, Kristopher Johnson, told CNN. "It just shredded the left-side engine completely. ... It was scary."

Major safety issues aboard U.S. airlines are rare, with no accidental deaths recorded last year, according to groups that track crashes.

Southwest shares fell more than 3 percent after the NTSB reported the fatality, then cut losses and was last down 1 percent on the New York Stock Exchange.

The aircraft's maker, Boeing, said on Twitter that it was aware of the incident and was "gathering more information." 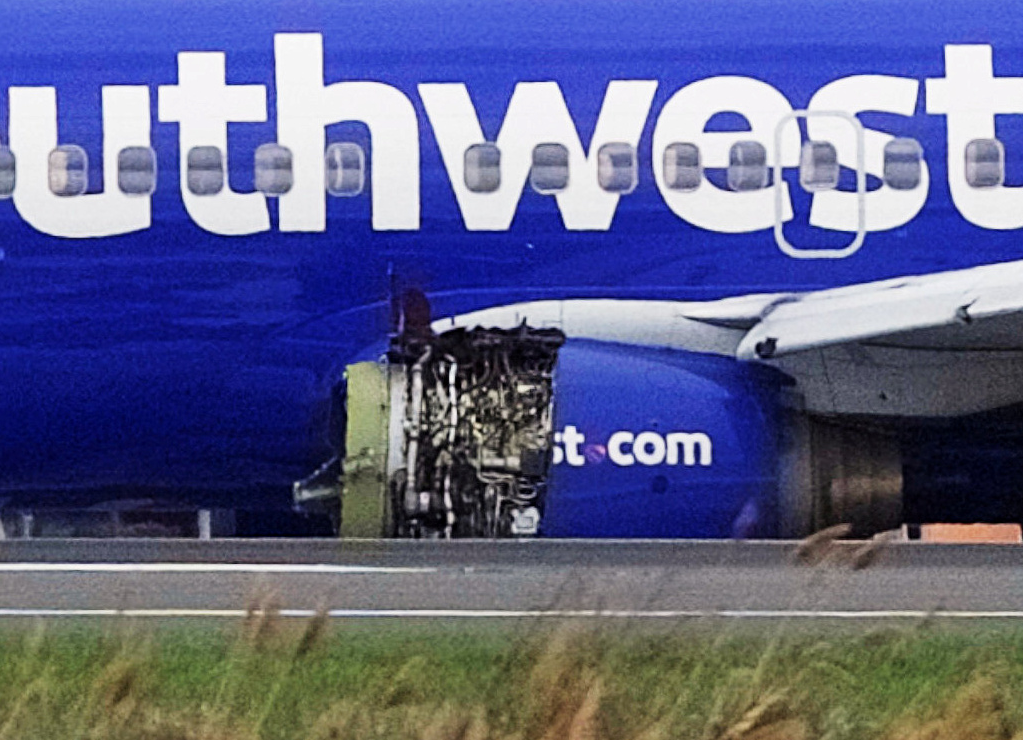 Emergency personnel monitor the damaged engine of Southwest Airlines Flight 1380, which diverted to the Philadelphia International Airport Tuesday morning after the airline crew reported damage to one of the aircraft's engines, on a runway in Philadelphia, Pennsylvania U.S. April 17, 2018. REUTERS/Mark Makela

The plane's engines are made by CFM International, a French-U.S. venture co-owned by Safran and General Electric , which was not immediately available for comment.

Marty Martinez, who said he was a passenger on the plane, posted images on his Facebook page of passengers wearing oxygen masks and later of a safety official onboard the aircraft.

"It looks like an engine blew out, then a window was blown open," he wrote.