Expired News - Nine out of 10 people in the world breathe polluted air: WHO - The Weather Network
We use cookies on this site to improve your experience as explained in our Cookie Policy. You can reject cookies by changing your browser settings.   READ MORE I ACCEPT

News
Editor's Choice
Earth's lightning capital of the world declared by NASA
OUT OF THIS WORLD | Earth, Space and Everything In-Between - a daily journey through weather, space and science with meteorologist/science writer Scott Sutherland

Nine out of 10 people in the world breathe polluted air: WHO

Wednesday, May 2, 2018, 6:16 PM - A new report on world air pollution has delivered some staggering figures - 9 out of every 10 people in the world are breathing heavily-polluted air, and millions of people are dying every year, due to exposure to air pollution.

In a new update to the World Health Organization's efforts to track air pollution levels, worldwide, and the health impact of that pollution on the world's population, the UN agency is raising the alarm for governments to do more about cleaning up the air we breathe.

"Air pollution threatens us all, but the poorest and most marginalized people bear the brunt of the burden," Dr. Tedros Adhanom Ghebreyesus, Director-General of WHO, said in a press release. "It is unacceptable that over 3 billion people - most of them women and children - are still breathing deadly smoke every day from using polluting stoves and fuels in their homes. If we don't take urgent action on air pollution, we will never come close to achieving sustainable development."


From the report, in 2016, an estimated 3.8 million people died, prematurely, due to indoor air pollution, mainly caused by the use of older cooking fuels and technologies in the home. Another 4.2 million died that same year due to exposure to outdoor, ambient air pollution, mainly due to photochemical smog from the transportation and power generation sectors, as well as industrial emissions, smoke from forest fires, waste burning and deforestation, and sea salt, desert dust and sand blowing on the wind. The majority of these premature deaths are caused by long-term exposure to fine particulates from these sources - the tiniest particles of smoke, ash and chemical air pollution, which are small enough to bypass many of the body's natural defenses.

Penetrating deep into the lungs, these particles can lead to life-threatening health impacts - respiratory infections, such as pneumonia, as well as lung cancer, heart disease, stroke, and chronic obstructive pulmonary diseases (COPD).

Based on the latest WHO records, roughly 94 per cent of the premature deaths due to air pollution in 2016 occurred in low- and middle-income nations. Over half (4.6 million total) were reported from low- and middle-income countries in South East Asia and the Western Pacific region. Those in Africa accounted for another 980,000, while 475,000 occurred in the Eastern Mediterranean region, 348,000 in Europe and 233,000 in the Americas.


Cities around the globe bear the largest responsibility, and the greatest health impact, when it comes to air pollution, but things are getting better.

According to the WHO, over 80 per cent of people in those urban centres that monitor air pollution are exposed to concentrations that exceed their limits for air quality. Looking just at those cities in low- and middle income countries, with over 100 000 inhabitants, that figure climbs to 97 per cent.

"Many of the world’s megacities exceed WHO's guideline levels for air quality by more than 5 times, representing a major risk to people’s health," Dr. Maria Neira, Director of the Department of Public Health, Social and Environmental Determinants of Health, at WHO, said in a statement. 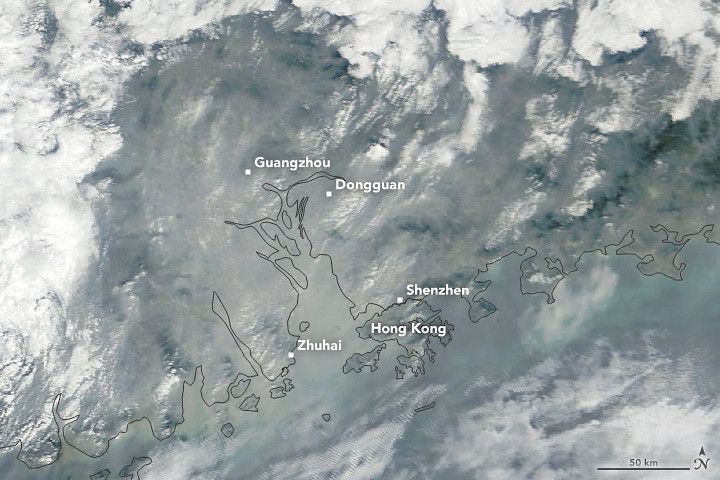 There is progress being made, however. Currently the WHO's ambient air quality database - the most comprehensive in the world - contains data from over 4300 cities, in 108 countries around the world. That includes over 1,000 new cities that have been added to the database since 2016, which the WHO says is an indication that more countries are stepping up measures to track air pollution, as well as taking action to reduce air pollution levels.

"We are seeing an acceleration of political interest in this global public health challenge," said Dr. Neira. "The increase in cities recording air pollution data reflects a commitment to air quality assessment and monitoring. Most of this increase has occurred in high-income countries, but we hope to see a similar scale-up of monitoring efforts worldwide."

"Political leaders at all levels of government, including city mayors, are now starting to pay attention and take action," added Dr. Tedros. "The good news is that we are seeing more and more governments increasing commitments to monitor and reduce air pollution as well as more global action from the health sector and other sectors like transport, housing and energy."

While the highest number of reporting cities was in Europe, the lowest numbers were in Africa and parts of the Western Pacific region. According to the WHO, even though the number of African cities reporting air pollution levels has more than doubled since their last update, they stated that increase comes from just 8 of the countries in the region. 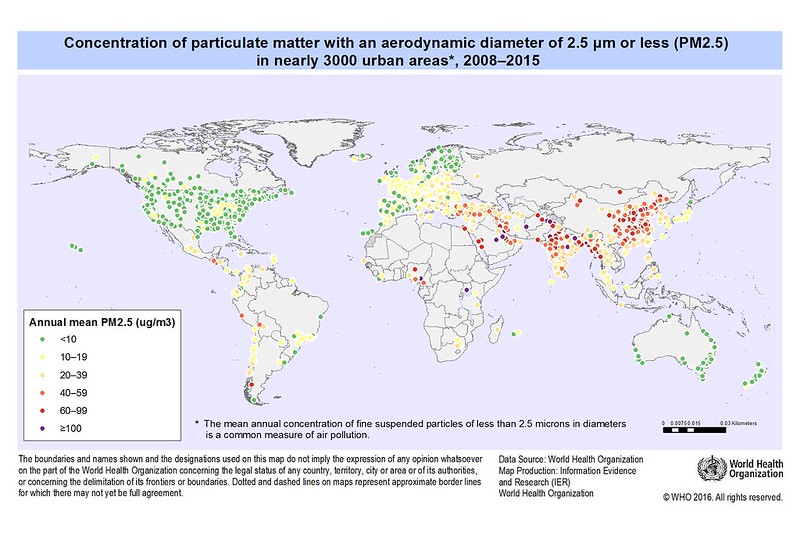 This map shows reported air pollution data, from cities around the world, between 2008-2015. Credit: WHO