Expired News - Newfound alien world may be the best place yet to find life - The Weather Network
We use cookies on this site to improve your experience as explained in our Cookie Policy. You can reject cookies by changing your browser settings.   READ MORE I ACCEPT

News
Editor's Choice
Canada's 2022 Winter Forecast, here
Roughly 40 light years away from us is a newly-discovered alien planet, which goes by the name LHS 1140b.
OUT OF THIS WORLD | What's Up In Space - a weekly look at the biggest news coming down to Earth from space

Friday, April 21, 2017, 2:32 PM - A newly discovered super-Earth planet may be our best place to find life beyond our solar system, astronomers capture a rare supernova brightening, and Cassini sends back a special gift prior to its Grand Finale. It's What's Up In Space!

A new (and maybe best) place to look for alien life!

Roughly 40 light years away from us is a newly-discovered alien planet, which goes by the name LHS 1140b.

It orbits a small red dwarf star, very different from our Sun. It's nearly half-again as big as our Earth, and over six times more massive. This implies that it is a rocky planet, rather than something like Neptune, but if we were to stand on its surface, gravity would pull us downward with over three times the force we feel here on Earth. Gleaning its age from astronomical data, researchers have estimated that it is at least five billion years old, thus at least half a billion years older than Earth. 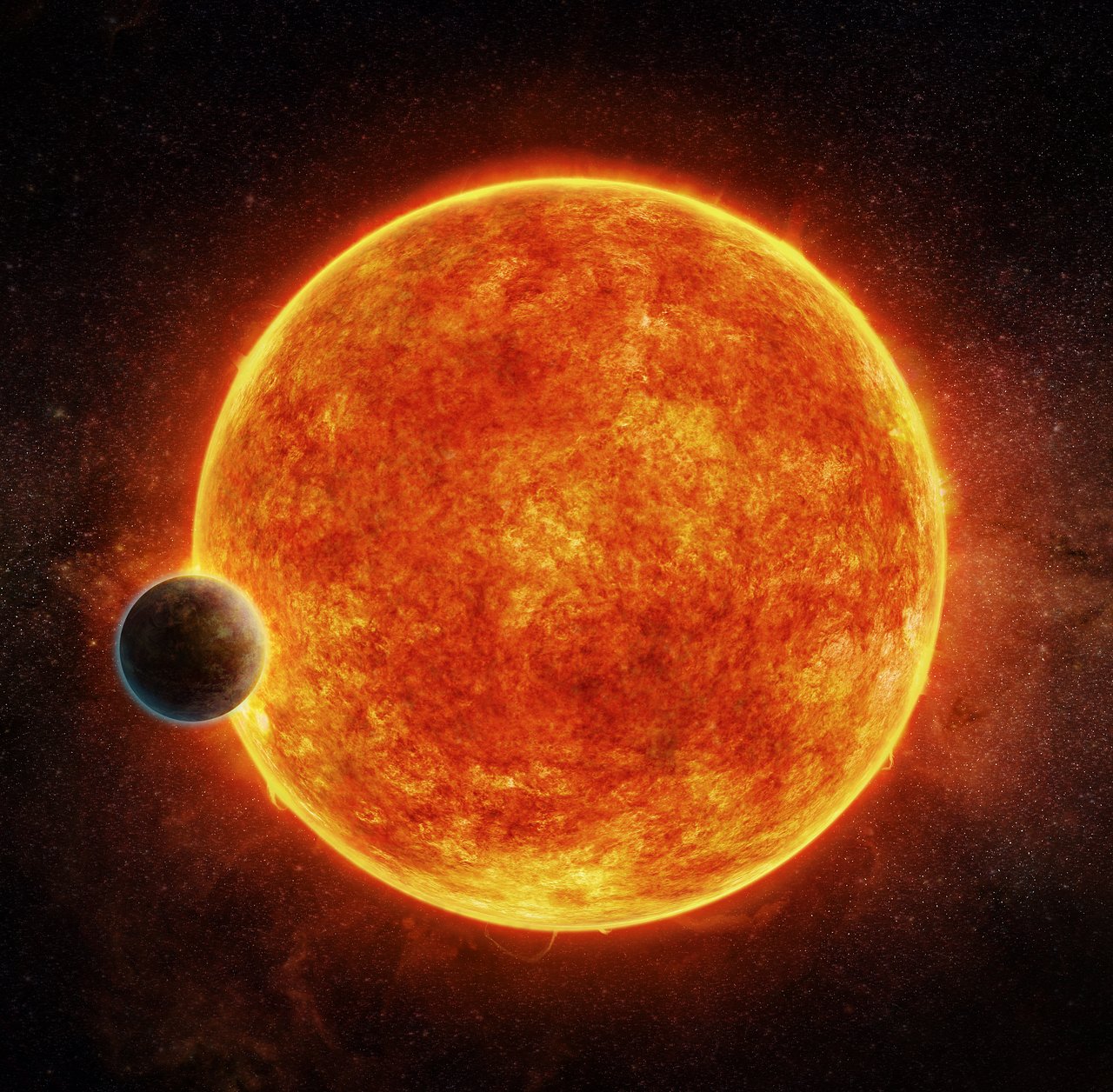 Artist’s impression of exoplanet LHS 1140b transiting across its tiny parent star, showing off the blue of its atmosphere (if it has one!). Credit: M. Weiss/CfA

So, with all of these differences from our own world, why would this exoplanet be our best chance to find extraterrestrial life?

For one, LHS 1140b circles its parent star just about in the centre of the habitable zone - the belt-like region around the star where a planet would receive just enough light and heat from its star (not too much or too little), to allow liquid water to exist on the planet's surface.

Normally, with a planet as big and bulky as this one, there would be concerns that it would retain a thick atmosphere, which would trap more of its star's heat than Earth's atmosphere traps from our Sun, and thus turn it into a hellish, uninhabitable super-Venus, rather than a habitable super-Earth. However, LHS 1140b only receives about half as much radiation from it star as Earth receives from the Sun. So, it could retain a thicker atmosphere while remaining more temperate, and thus more friendly to live as we know it.

Also, typical red dwarf stars, although they are extremely long-lived compared to our Sun, tend to be much more volatile, blasting out immense solar flares and coronal mass ejections that could strip a planet's atmosphere away, turning it into a barren wasteland. LHS 1140, though, has been seen to rotate much slower than a typical red dwarf, and so it would be much quieter, and thus much more kind to the planets orbiting around it.

So, those two factors - its exact location in the habitable zone, which offsets its size, and its home around a quiet red dwarf - make it very promising. Plus, given its age, it certainly has had enough time to go through all the same processes that allowed life to form and then evolved on our Earth (and then some!).

What really propels LHS 1140b towards the top of the "best place to look for signs of alien life" list, though, is a combination of three other factors:

1) At only 40 light years away, it is relatively easy to view LHS 1140b with telescopes, and something like the Hubble Space Telescope (and the James Webb Space Telescope, once it's launched) can gather a LOT of information about it, including details about its atmosphere, if it has one,
2) We view the plane of LHS 1140b's orbit almost edge-on from here, so each time it goes around its star, we get nearly the longest transit time possible, and
3) Since it is much closer to it star than Earth is to the Sun, it only takes about 25 of our days for the planet to make one orbit. This means we can get repeated observations of the transit of LHS 1140b in only a small amount of time, and thus gather an amazing amount of science for just a small investment.

"This is the most exciting exoplanet I’ve seen in the past decade," Jason Dittmann of the Harvard-Smithsonian Center for Astrophysics, who led the team in this discovery, said in an ESO press release. "We could hardly hope for a better target to perform one of the biggest quests in science -- searching for evidence of life beyond Earth."

According to the European Southern Observatory (ESO), upcoming observations with Hubble will tell us more about this planet, and give us a better indication of what conditions there may be like!

For the very first time, astronomers have captured an Einstein Cross produced from a type Ia supernova!

What this means is, in a distant galaxy, located on the far side of a closer, known galaxy (located about 2 billion light years away from us), a tiny white dwarf star siphoned off enough matter from its larger binary companion star, to cause an immense explosion. This explosion, which is known as a type 1a supernova, generated enough light to briefly outshine its host galaxy. As that light travelled outwards into space, the photons that were headed straight in our direction encountered the gravitational lens formed by the closer galaxy - basically, the immense curvature of spacetime caused by the mass of the galaxy, and this curvature caused the photons to travel in four separate arcs around it, resulting in four points of light surrounding the lensing galaxy. This effect is called an Einstein Cross.

We've seen this kind of effect before, with other supernovae. A little over a year ago, astronomers were actually able to correctly predict that they would see a supernova show up, based on studying the size and shape of the gravitational lens the light was travelling around.

What's special about this particular supernova is that it is apparently the very first time astronomers have seen this gravitational lensing effect happen with this kind of supernova.

According to the ESA's Hubble Space Telescope site:

Type Ia supernovae always have the same intrinsic brightness, so by measuring how bright they appear astronomers can determine how far away they are. They are therefore known as standard candles. These supernovae have been used for decades to measure distances across the Universe, and were also used to discover its accelerated expansion and infer the existence of dark energy. Now the supernova iPTF16geu allows scientists to explore new territory, testing the theories of the warping of spacetime on smaller extragalactic scales than ever before.

"Resolving, for the first time, multiple images of a strongly lensed standard candle supernova is a major breakthrough," Ariel Goobar, the professor at the Oskar Klein Centre at Stockholm University who led the study of supernova iPTF16geu, said in a statement. "We can measure the light-focusing power of gravity more accurately than ever before, and probe physical scales that may have seemed out of reach until now."

NASA's Cassini spacecraft is now approaching its final encounter with Saturn's largest moon, Titan, which will slingshot the probe into a new orbit that will begin the nearly 5 month long Grand Finale that will precede its destruction in the gas giant's upper atmosphere.

On its way to doing that, though, Cassini aimed its camera back home, to snap this picture, of Earth and the Moon, framed up by Saturn's rings. 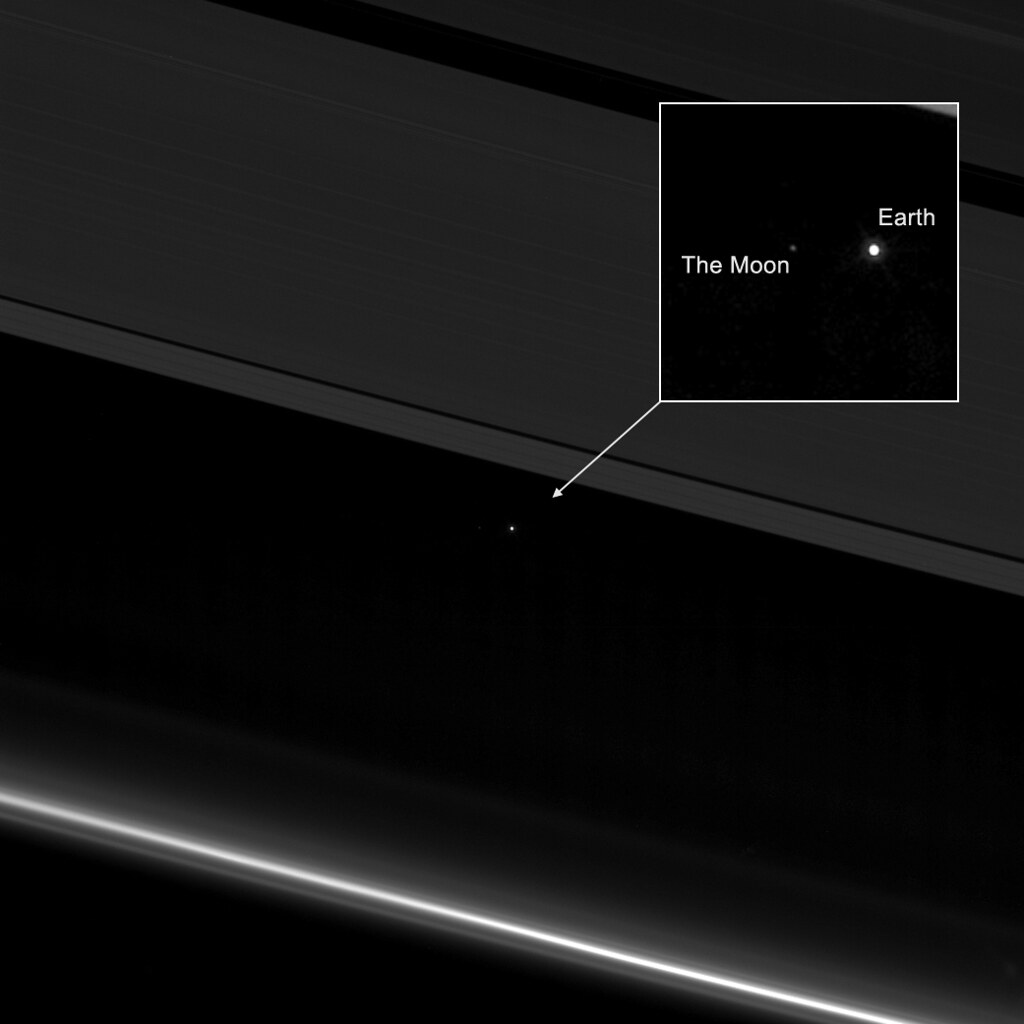 Cassini snapped this picture of planet Earth and its Moon, as points of light between the icy rings of Saturn, on April 12, 2017. Credits: NASA/JPL-Caltech/Space Science Institute. Zoomed, brightness-enhanced and labelled inset added by S. Sutherland