Expired News - New satellite to test how best to dispose of space junk - The Weather Network
We use cookies on this site to improve your experience as explained in our Cookie Policy. You can reject cookies by changing your browser settings.   READ MORE I ACCEPT

New satellite to test how best to dispose of space junk

Friday, April 6, 2018, 4:50 PM - A new satellite, just delivered to the International Space Station, will soon be released into orbit, with a mission to help us clear the junk from our spacelanes.

SpaceX's latest Dragon cargo ship arrived at the space station early Wednesday morning, bringing over 2.6 metric tons of supplies, equipment and science experiments along with it. One of the pieces of equipment that arrived is a bit different from the rest, though.

RemoveDEBRIS is a new satellite, but rather than being launched directly into space via rocket, this satellite will be unpacked from the Dragon cargo ship, assembled by the station crew, and then deployed from the station into orbit. By using this method of deployment, the satellite will avoid adding any new pieces of space debris into near-Earth orbit, but as its name implies, RemoveDEBRIS is expected to take a much more active role in dealing with the growing problem of space junk. 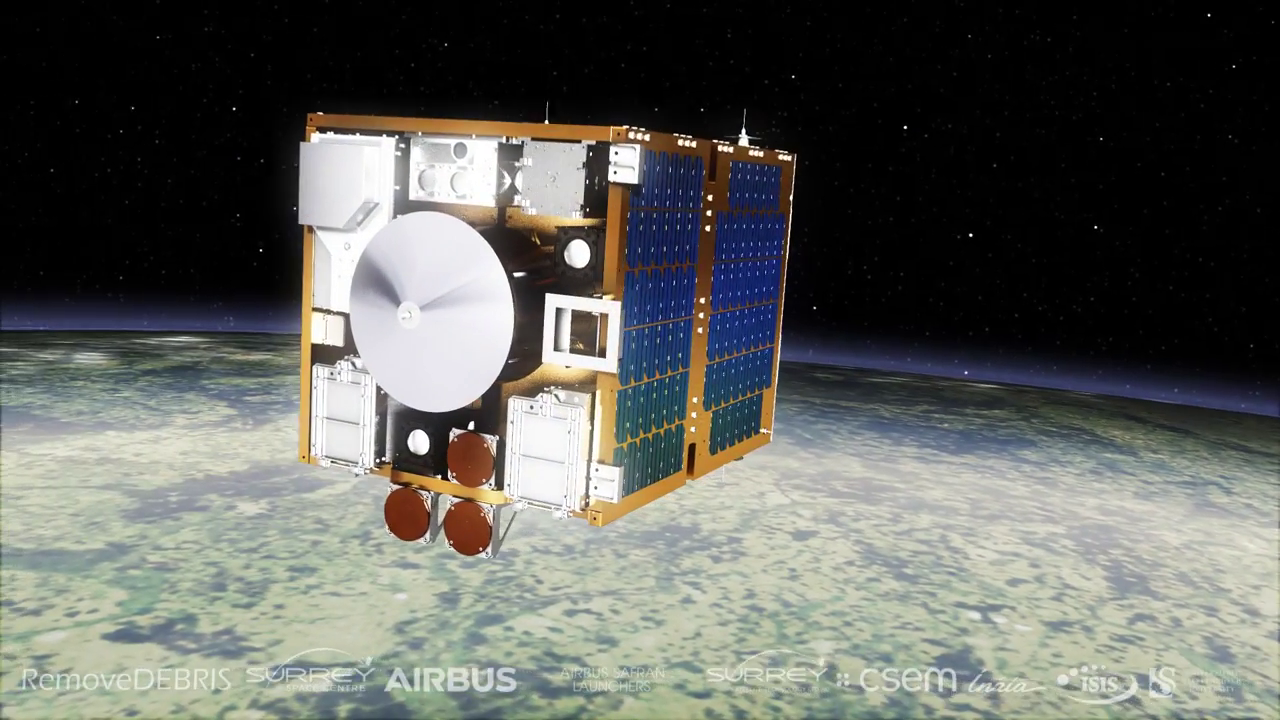 "It is important to remember that a few significant collisions have already happened," Professor Guglielmo Aglietti, Director of the Surrey Space Centre at the University of Surrey, said in a press release. "Therefore, to maintain the safety of current and future space assets, the issue of the control and reduction of the space debris has to be addressed."

"We believe the technologies we will be demonstrating with RemoveDEBRIS could provide feasible answers to the space junk problem - answers that could be used on future space missions in the very near future," Aglietti added.

Once deployed, RemoveDEBRIS will spend over a year in orbit, testing four different methods of space debris removal, and reporting back on its findings from each.

Three of its experiments deal directly with the capture and deorbiting of space junk, while the remaining test will use methods of detecting a target's orientation, spin and velocity, for more controlled retrieval methods.

First on RemoveDEBRIS' list of tests is a net launcher, designed to snare a test target. What is done with a satellite after it is caught in this way would depend on the mission. For example, the net could carry with it a dragsail (shown below), which would then de-orbit the satellite quickly. The test target, in this case, will deploy a balloon prior to the net deployment, which will act to slow the satellite down and deorbit it quickly after the experiment concludes. 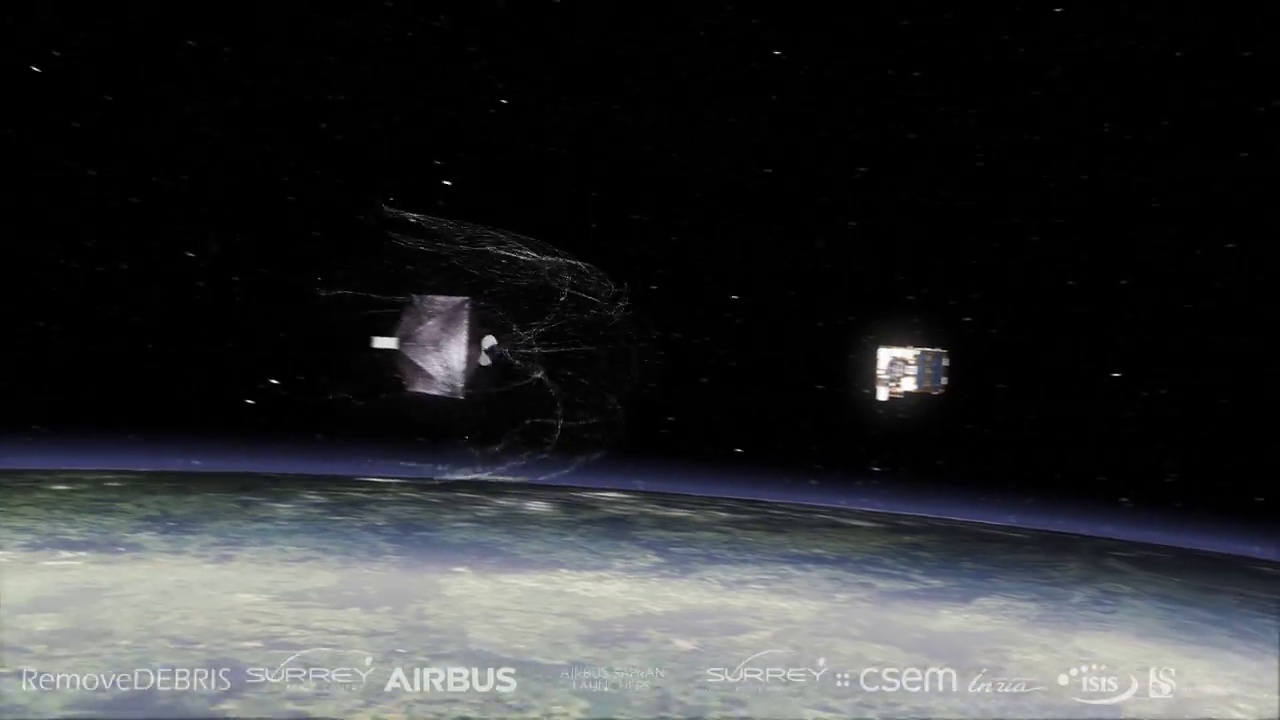 This method is especially useful for objects that are known to be spinning, which could make other methods less successful.

Second on the agenda, RemoveDEBRIS will use cameras and LIDAR to send back data collected on another test cubesat it will deploy specifically for this experiment. 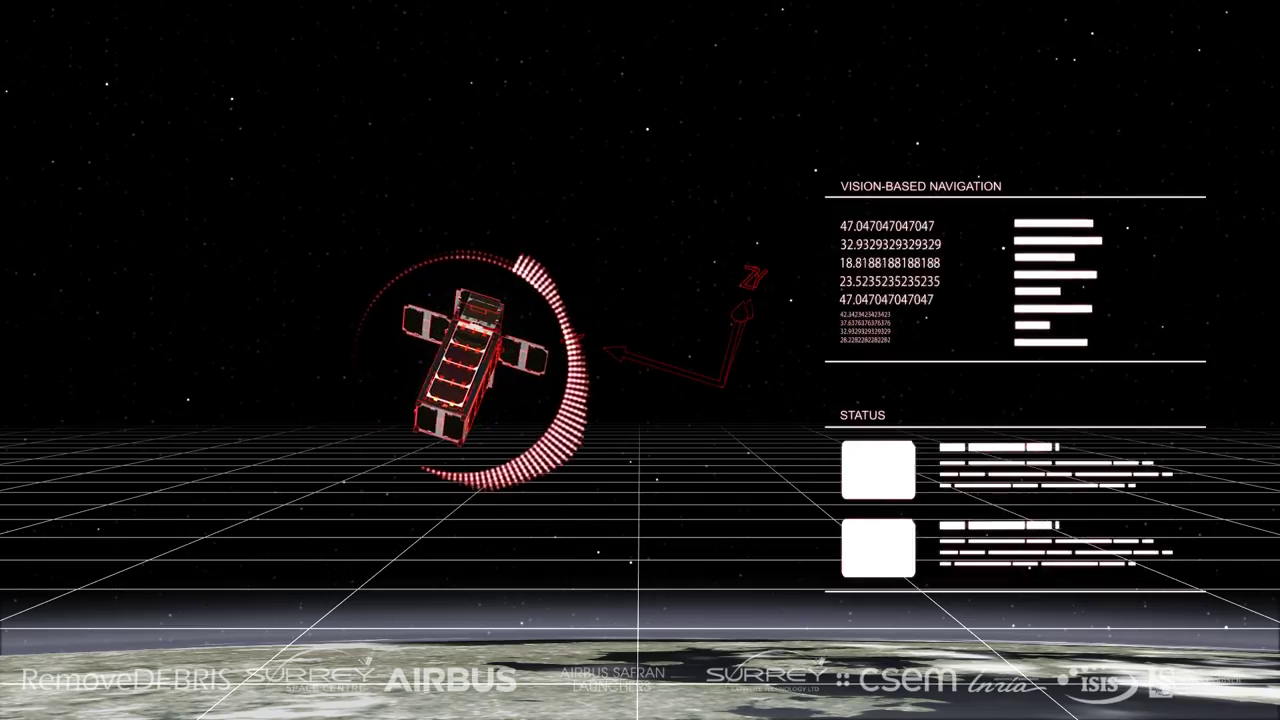 The information gathered on its target - orientation, rotation, velocity - will help develop intelligent algorithms that will assist future spacecraft in the controlled rendezvous and retrieval of objects from orbit that are part of active science missions, such as sample retrieval mission from asteroids, comets or even from Mars.

The third experiment RemoveDEBRIS will perform will involve firing a harpoon at a target that the satellite will extend away from its chassis. As with the net, once a satellite was harpooned, it could be easily de-orbited via a dragsail (below). 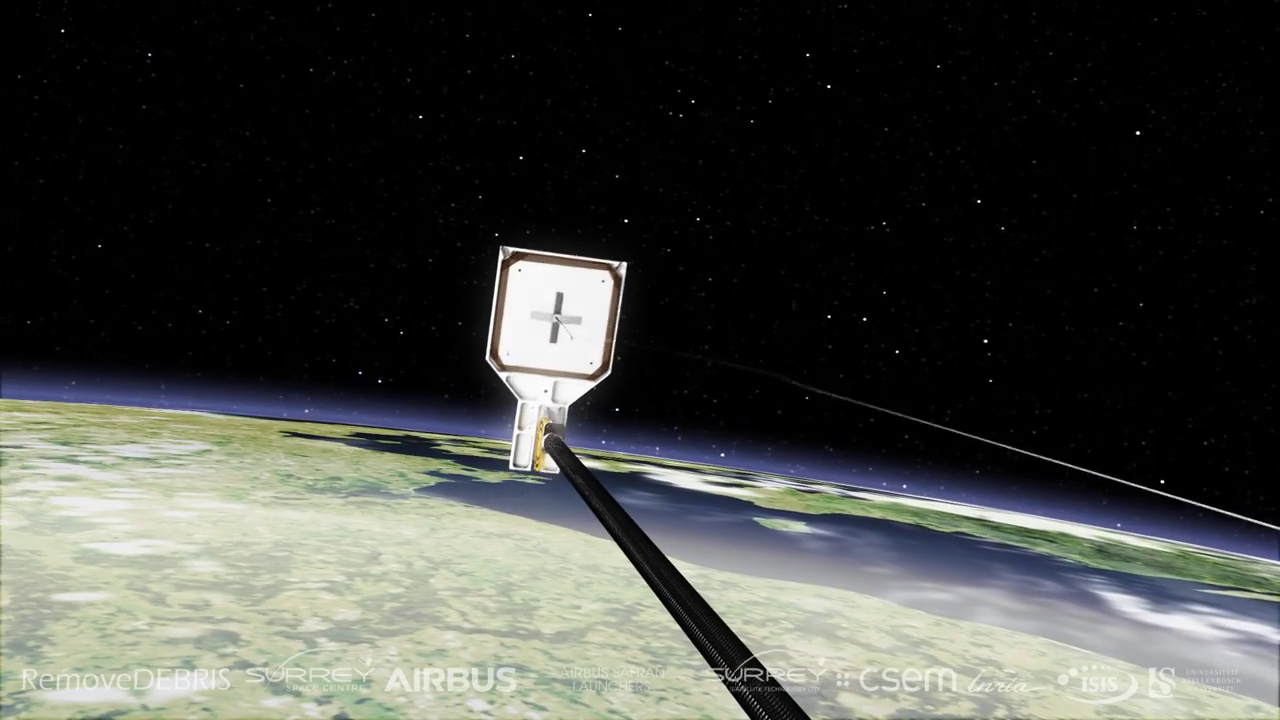 In this case, the harpoon target remains attached to RemoveDEBRIS throughout the test, and will be drawn back to the satellite's chassis once the experiment is complete.

The fourth and final experiment of the mission will not involve any external target, but will be used to actively de-orbit the RemoveDEBRIS satellite, itself.

At the designated time, RemoveDEBRIS will deploy a dragsail - an inflatable and extendable system of carbon fibre booms, which will unfurl a sail behind the satellite. This will increase its atmospheric drag significantly, and cause the satellite to quickly de-orbit, burning up in Earth's atmosphere much sooner and much quicker than it would have if simply left to de-orbit on its own. Such a system could be added to any satellite launched into orbit, going forward, to quickly bring it down once its mission is complete. 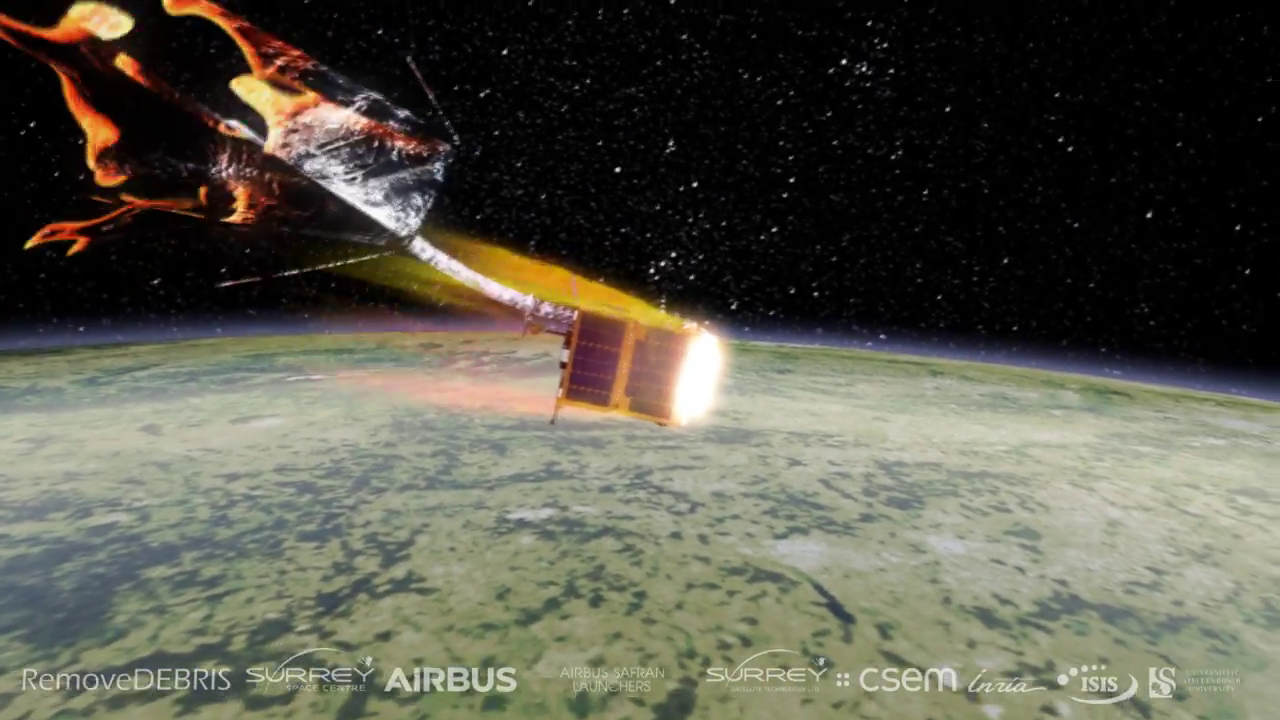 Watch Below: This animation shows all of the known pieces of space junk in orbit around Earth


Space debris is becoming a serious problem, and it is only going to get worse as we continue to launch satellites and spacecraft into Earth orbit and beyond.

According to the European Space Agency, there are around 29,000 pieces of space debris in orbit, larger than 10 centimetres across. This includes everything from lost tools, all the way up to defunct satellites and spent rocket boosters.

Tally up all the objects larger than 1 centimetre, thus including random fragments produced by spacecraft separations (or spacecraft collisions!) and that number climbs to around 670,000. Include objects down to 1 millimetre and the number skyrockets, to over 170 million!

Given that these objects are travelling at speeds of around 28,000 kilometers per hour, any of them, of any size, could be dangerous to satellites or spacecraft in orbit. An object 10 cm across, travelling at that speed, could destroy a satellite and cause serious damage to the International Space Station or other spacecraft. Even a 1 millimetre fragment of titanium could potentially do more damage to a satellite's subsystem than a rifle bullet.

Just last year, according to NASA's Orbital Debris Program Office, two satellites in the belt of geostationary orbit suffered what is called "anomalous events". Each of these "anomalous events" were enough to push the satellite into a slightly different orbit, implying that there was some kind of collision involved, and each event put the satellite in question out of commission. Only one, the AMC-9 communication satellite, was able to be directed into a so-called graveyard orbit, above the geostationary ring. Exactly what caused this events is unknown. It may have been other spacecraft debris or it may have been impacts from meteoroids.