Expired News - NASA launching spacecraft that will 'touch' the Sun in 2018 - The Weather Network
We use cookies on this site to improve your experience as explained in our Cookie Policy. You can reject cookies by changing your browser settings.   READ MORE I ACCEPT

News
Editor's Choice
Why is ice so slippery?
NASA's Parker Solar Probe is scheduled to launch in 2018, and will give us our closest look ever at a star.
OUT OF THIS WORLD | What's Up In Space - a weekly look at the biggest news coming down to Earth from space

NASA launching spacecraft that will 'touch' the Sun in 2018

Thursday, June 1, 2017, 12:17 PM - NASA is launching a spacecraft in 2018 that will 'touch' the Sun, Saturn's icy moon Enceladus apparently took a hit that knocked it on its side, and hear what it sounds like when a meteoroid hits a spacecraft's camera. It's What Up In Space!

Next year, sometime in the summer of 2018, NASA is planning to launch the Parker Solar Probe.

This car-sized spacecraft will take multiple dives through the top of the solar corona, effectively giving us our first opportunity to "touch" the Sun and gain key insights into the workings of its atmosphere.

The newly renamed Parker Solar Probe swings by the Sun in this artist's rendition. Credit: NASA/JHUAPL

Over roughly seven years following its launch, the probe will use the gravity of Venus to assist it as it pulls closer and closer to the Sun, until it reaches a distance of around 6.25 million kilometres from the Sun's 'surface'. From there, each orbit around the Sun will bring the spacecraft on a trajectory to dive through the topmost layer of the solar corona - the Sun's intensely hot atmosphere.

By sampling the environment there, the Parker Solar Probe will help answer some key questions about our home star - perhaps most importantly, why is the Sun's corona, which can reach temperatures into the millions of degrees, so hot compared to the Sun's surface, which has a temperature of roughly 6,000 degrees. We have some clues to this mystery from other missions (such as the concept of microflares), however the answers are far from settled.

Protected behind a new carbon-composite heat shield, the probe's instruments will remain at roughly room temperature as they gather information in a region of the corona that reaches temperatures of nearly 1,400oC.

"The solar probe is going to a region of space that has never been explored before," astrophysicist Eugene Parker, the scientist who discovered the solar wind, and whom the spacecraft was named for, said in a NASA statement. "It’s very exciting that we’ll finally get a look. One would like to have some more detailed measurements of what’s going on in the solar wind. I’m sure that there will be some surprises. There always are."

A moon knocked on its side

Saturn's ice moon Enceladus has already fascinated us, with the variety of terrain on its surface, the plumes of water vapour that stream from cracks in that surface, and the possibilities for life in the subsurface ocean that most certainly exists below that surface.

One of the mysteries about the moon, however, is why its polar regions are so different from one another. The north pole of Enceladus is very old and cratered, while the south pole - where the water vapour plumes originate - is very young and geologically active.

According to a new paper published in the journal Icarus on April 30, the polar regions should have been more alike to one another, and also, it is unlikely that the geologically-active tiger stripes were started by some process under the moon's icy surface.

The researchers, led by Radwan Tajeddine, a Cassini imaging team associate at Cornell University, offer an explanation for both the polar differences and for this activity that may be the same - at some point in its distant past, Enceladus suffered a hit so hard that it knocked the moon nearly on its side.

"We found a chain of low areas, or basins, that trace a belt across the moon's surface that we believe are the fossil remnants of an earlier, previous equator and poles," Tajeddine told NASA.

Based on their study, the linear stripes, known as "tiger stripes" (shown in the image to the upper right), would have appeared more at mid-latitudes of Enceladus' southern hemisphere, as shown in the comparative topographical maps below. 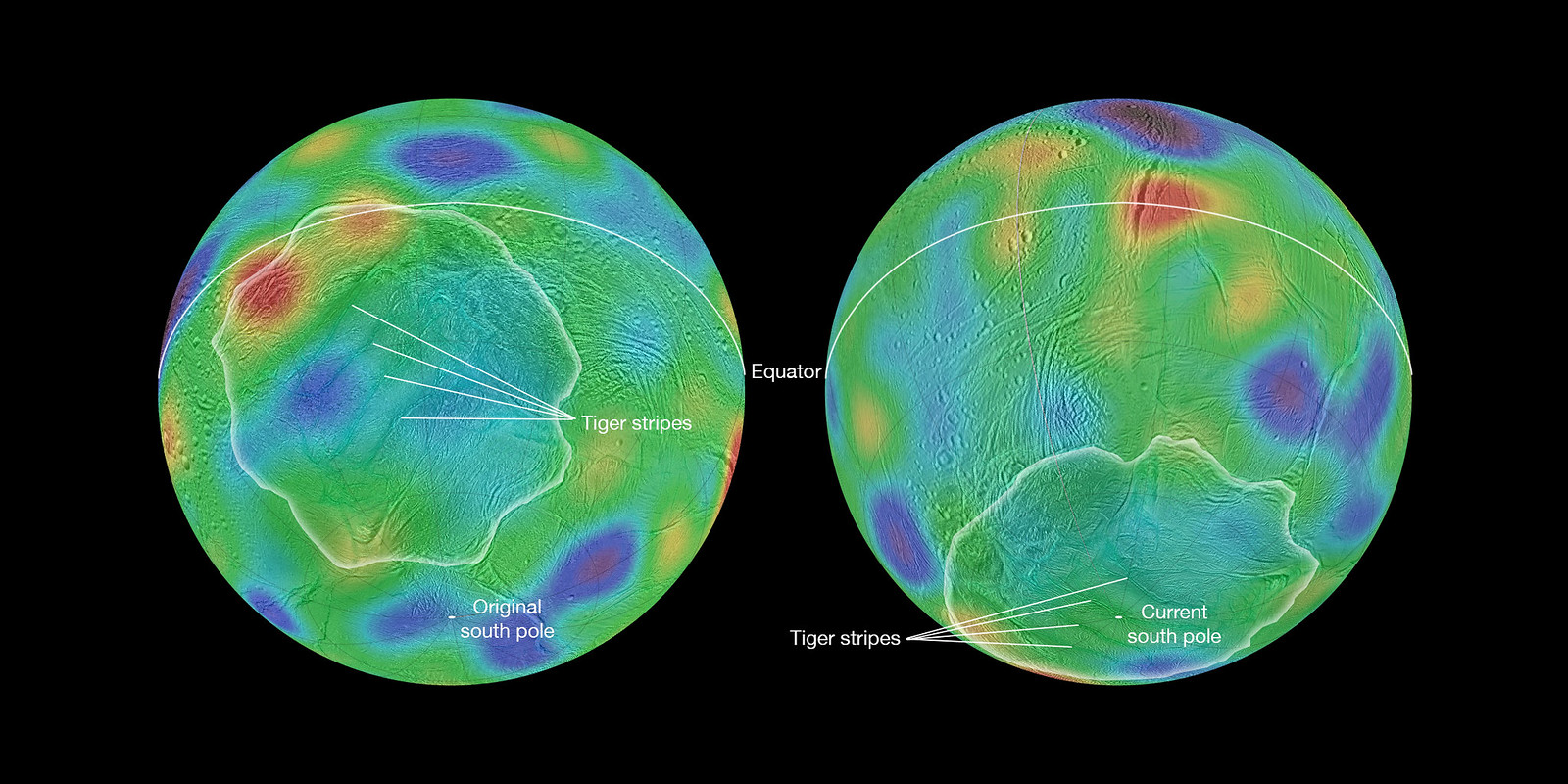 Topographical maps of Enceladus, showing basins, highlands and the "tiger stripes", pre-impact on the left and current on the right. Credit: NASA/JPL-Caltech/Space Science Institute/Cornell University

After an impact hard enough to tip the moon by 55 degrees, it would have taken millions of years for it to settle into its new orientation - a case of 'true polar wander'.

"The differences Cassini has observed between the north and south poles remains peculiar," Tajeddine said in a Cornell University statement. "Originally, the poles of Enceladus would have been the same, more or less, before true polar wander occurred. The true polar wander hypothesis seems very plausible when we take a combined look at the patterns of highs and lows across the moon's surface, the physical appearance of surface features and the differences between the current poles."

A meteoroid hits LRO with a SPANG

There is a lot of debris floating around in space, much of it dating back to the origin of our solar system. Earth sweeps up tonnes of it every day, and our spacecraft deal with it all as well (the space station is apparently pock-marked from its frequent encounters), every once in awhile, we get to see the evidence of this (remember Commander Chris Hadfield's picture of the ISS solar panel "bulllet hole"?).

Back in 2014, however, we actually got to HEAR one of these impacts.

You can't hear in space, of course. Even if we were to brave the vacuum without a space suit, there's just not enough "stuff" in space for vibrations to travel through, to eventually reach our ears and register a sound.

When NASA's Lunar Reconnaissance Orbiter was travelling around the Moon taking images, however, its camera took a hit from something - something very tiny, but moving very fast - and while it didn't cause any significant damage, the vibrations of the impact did cause the images from the camera to wobble. 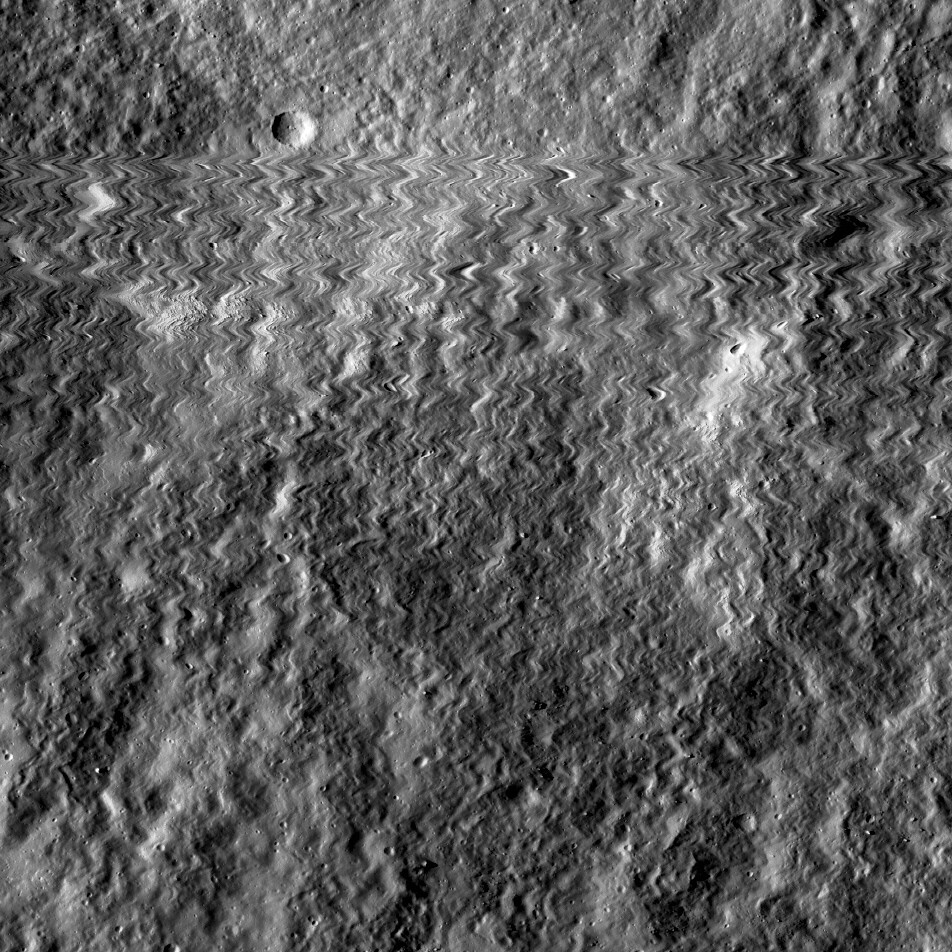 This image, taken by LRO on October 13, 2014, shows the moment when the left Narrow Angle Camera's radiator was struck by a micrometeoroid. Credit: NASA's Goddard Space Flight Center/Arizona State University

Based on the data from LRO, the mission scientists were able to estimate the size of the meteoroid that hit it.

Using this detailed computer model, the LROC team ran simulations to see if they could reproduce the distortions seen on the Oct. 13 image and determine the size of the meteoroid that hit the camera. They estimate the impacting meteoroid would have been about half the size of a pinhead (0.8 millimeter), assuming a velocity of about 4.3 miles (7 kilometers) per second and a density of an ordinary chondrite meteorite (2.7 grams/cm3).

Alex Parker, a planetary astronomer at the Southwest Research Institute, took this image and converted the wobbles to sound data, so that we could hear what this impact would have sounded like:

Honestly, it might be more of a THWOCK than a SPANG, but you be the judge!

Watch a Dragon fly for the second time!

SpaceX has already flown and landed one of their Falcon 9 booster rockets twice, but their latest launch to the International Space Station is the first time they have re-flown one of their Dragon cargo spacecraft.

On Saturday, June 3, at 5:07 p.m. EDT, the CRS-11 cargo launch to the ISS lifted off from Pad 39A at Kennedy Space Center. Carrying around 2,700 kg of supplies, equipment and scientific experiments, the Dragon will arrive at the space station on Sunday.

Watch below for a replay of the launch, separation of the Falcon 9 1st stage and its landing back at Kennedy Space Center LZ-1, and the separation and orbital insertion of the Dragon and the second stage of the rocket.