Expired News - Canada disappoints on climate action. Here’s how bad - The Weather Network
We use cookies on this site to improve your experience as explained in our Cookie Policy. You can reject cookies by changing your browser settings.   READ MORE I ACCEPT

Thursday, March 29, 2018, 8:22 AM - A new report has taken a close look at Canada's climate action plans and accomplishments so far, and it has found them seriously lacking, which puts the country at risk of not only missing key upcoming emission targets, but will also make us more vulnerable to climate impacts.

For the first time, ever, Auditors General from across Canada have collaborated to produce a new report, assessing the country's progress towards meeting its climate action goals. Perspectives on Climate Change Action in Canada - A Collaborative Report from Auditors General - March 2018, puts the country's plans and actions, up to 2015, under close scrutiny, to determine if we can reach the goals set out for both 2020 and 2030, or at the very least, tell us by how much we will miss those targets.

SEE ALSO: Woman tries to save tree, ends up marrying it

It really comes as no surprise, based upon the previous government's lack of action, that the Auditors General found that we will not even be close to meeting our targets for 2020.

So far, Canada has missed two major climate emission reduction goals - from the 1992 Rio Earth Summit and the 2005 Kyoto Protocol - and based on the assessment in this report, the country is currently on track to miss the target set out for 2020, during the 2009 Copenhagen Summit, by roughly 20 per cent.

The key points made by the report are:

• Less than half of the provinces and territories assessed had overall targets for reducing greenhouse gas emissions (BC, Ontario, New Brunswick, Nova Scotia, and Newfoundland and Labrador). Of those, only two (New Brunswick and Nova Scotia) were on track to meet their targets by 2020
• Of all the governments assessed, provincial and federal, only 1 - Newfoundland and Labrador - had fully assessed the climate change risks that they face, and had developed detailed climate adaptation plans. All others either lacked comprehensive risk assessments, only had assessments performed more than a decade ago, had only performed some of their planned mitigation actions, or lacked any risk mitigation plans at all
• Most governments assessed on coordination (7 of the 10) were found lacking when it came to providing effective leadership between agencies or between different levels of government, or providing the knowledge or resources necessary between different levels of government to make effective decisions, or providing guidance for effective implementation of climate action plans. Only Alberta, New Brunswick and Yukon were found to have adequate coordination across government offices
• Only half of the governments assessed (Alberta, British Columbia, New Brunswick, Newfoundland and Labrador, Nova Scotia and Yukon) were found to be reporting on climate action progress in a regular and timely manner to the public

BELOW: Nova Scotia reaches climate agreement that could make a BIG difference


Based on the findings of the report, Canada is also in danger of missing its promised emission reductions target for 2030, which was offered up as part of the 2015 Paris Agreement. 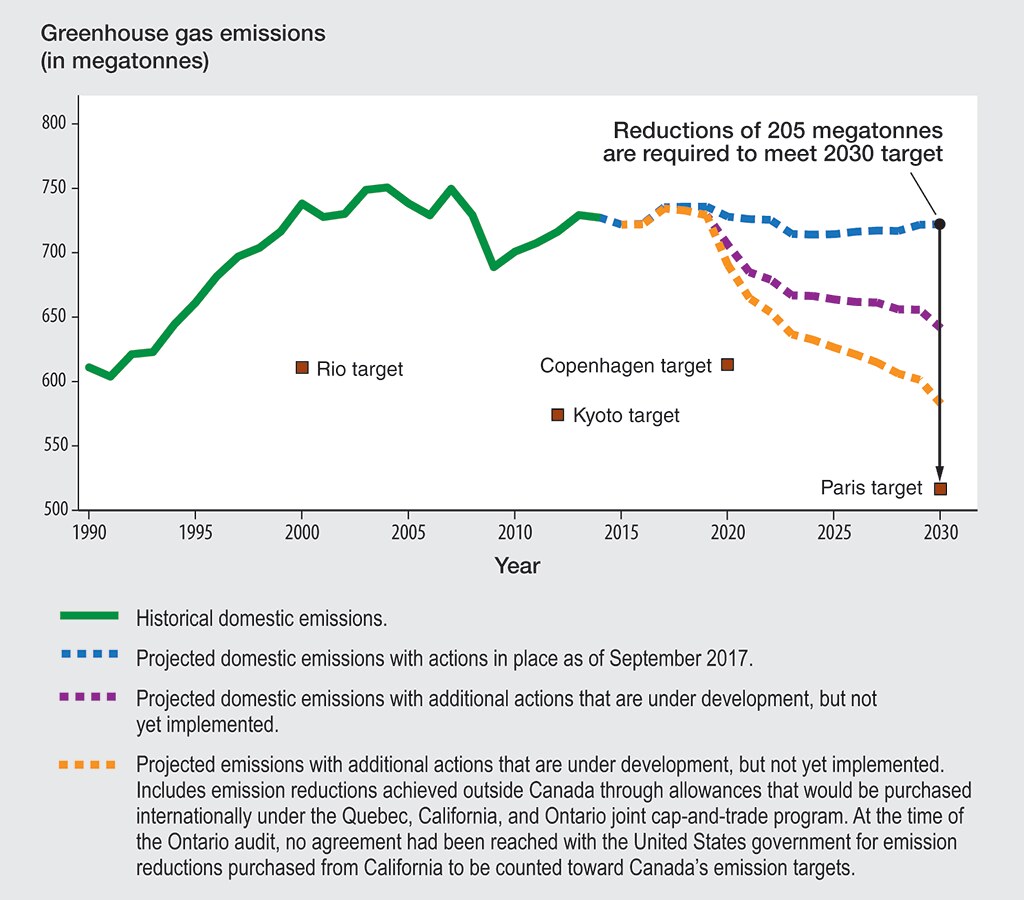 Historic and projected greenhouse gas emissions, from the March 2018 Auditors General collaborative report, compared to the various emission goals the country has agreed to over the years. Based on plans and actions up until 2015, the nation is expected to miss its 2030 Paris target by at least 205 megatonnes. Credit: Office of the Auditor General, Government of Canada

In response to the report, Catherine McKenna, Minister of Environment and Climate Change, lays the responsibility for the projected overshoot of the 2020 target squarely at the feet of the Harper government.

"For a decade under Harper, we had no plan at all," McKenna said in an interview with CBC News. "We were going in the wrong direction."

"In the past, we've had targets, but we've had no plan," McKenna added. "You can't meet a target if you don't have a plan, and we have a clear plan to get there."

Indeed, with the assessment report only taking into account plans and actions up until 2015, it does not fully take into account The Pan-Canadian Framework on Clean Growth and Climate Change, a joint climate action plan between the federal government, the provinces and the territories, which was adopted in December 2016.

At the same time, Environment and Climate Change Canada estimates that, should all the targets of the Framework be met, on time, Canada would still need to reduce its emissions by another 66 megatonnes, over and above what was accomplished by that time, to actually meet that 2030 goal. Further assessments of the impact of new public transit projects, as well as advancements in the clean energy sector may close that gap, however only time will tell.

Watch Below: CLIMATE vs. WEATHER, Chief Meteorologist explains the difference