Expired News - NASA InSight to give us our best look yet at Mars weather - The Weather Network
We use cookies on this site to improve your experience as explained in our Cookie Policy. You can reject cookies by changing your browser settings.   READ MORE I ACCEPT

News
Editor's Choice
Canada's 2022/23 Winter Forecast revealed, here
OUT OF THIS WORLD | What's Up In Space - the biggest news coming down to Earth from space

Thursday, November 22, 2018, 1:42 PM - NASA's new InSight lander is scheduled to touch down on Mars in just a few days, on a historic mission that will give us our first good look at the heart of the Red Planet, and our best ever look at Mars weather.

On Monday, November 26, 2018, at roughly 3 p.m. Eastern time on Earth, the robotic population of the planet Mars is expected to tick up by one.

That is when NASA's newest Mars explorer, the InSight lander, is scheduled to touch down on the flat, volcanic plain known as Elysium Planitia. It's mission, according to NASA is "to investigate processes that shaped the rocky planets of the inner solar system more than four billion years ago."

(RELATED: NASA's InSight is just weeks away from its harrowing plunge through Mars' atmosphere. See its Seven Minutes of Terror here.)

InSight, which stands for Interior Exploration using Seismic Investigations, Geodesy and Heat Transport, is a robotic lander, similar to the Viking, Pathfinder and Phoenix missions of the past. Rather than driving around on the surface, like the Opportunity and Curiosity rovers do, InSight will not move from its landing point, remaining perfectly still, going about its mission by using an array of sensors.

The most important of these is its Seismic Experiment for Interior Structure, or SEIS, which will be placed on the Martian surface, beside the lander, to detect tremors in the ground. 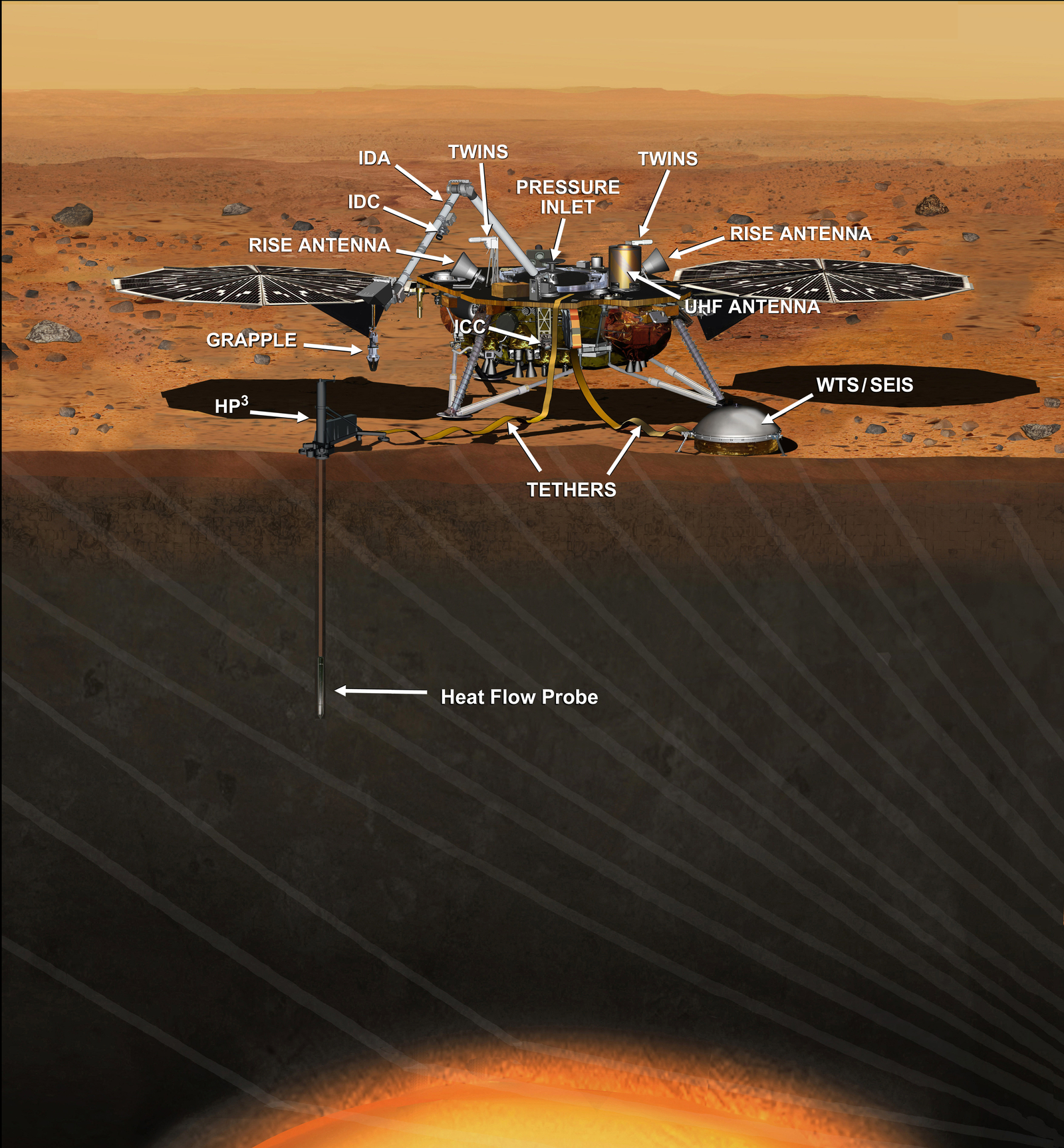 This artist rendition depicts NASA's Insight lander on the surface of Mars. The lander's various scientific instruments are labelled, with SEIS visible on the ground, on the right side of the lander, protected by the domed 'wind and thermal shield' (WTS). Click or tap the image to find out more about Insights array of instruments. Credit: NASA/JPL-Caltech

Here on Earth, seismologists have used the waves of motion that are set off in the ground by earthquakes to tell what the interior of the planet looks like, with its various layers - the crust, the upper and lower mantle, and the outer and inner core.

This is based on the fact that these seismic waves travel at different speeds depending on what type of 'stuff' they are travelling through. So, by sensing an earthquake from different locations around the world, they can use the time it took the vibrations from the quake to reach specific sensors to determine what kinds of materials those vibrations passed through.

Watch below: Marsquakes? What are those?


Using these same methods, InSight scientists will be able to use the tremors on Mars, which they've named "marsquakes", to get an idea of what the interior of the planet looks like.

NO PLATE TECTONICS? WHERE DO MARSQUAKES COME FROM?

It's true. Mars is not tectonically active.

Unlike Earth, Mars does not have pieces of its crust moving about and grinding together, to produce quakes. This is due to the size of the planet. Being much smaller than Earth, the heat from the interior of Mars escaped into space much more quickly, and therefore, it is generally thought that the inside of the planet is dormant.

So, how do marsquakes happen? The best guesses at the moment are:

Since Mars is fairly close to the asteroid belt, it is likely pummeled by meteorite strikes on a fairly regular basis. InSight will be able to detect those strikes, and use the seismic vibrations from them to probe the planet's interior.

During a public science briefing on Wednesday, InSight's principal investigator, Bruce Banerdt, added two additional sources of vibrations that the lander may pick up:

• the 'uplift' of the Martian ground that is experienced as the Martian moon Phobos passes overhead, due to the gravitational pull of the moon, and
• resonance frequencies set up in the ground due to atmospheric turbulence 'beating' on the surface.

So, while wind and pressure changes on the surface are largely of interest to the mission due to the 'noise' they will introduce into the seismic measurements, these resonance frequencies due to atmospheric turbulence may actually help InSight do its job! 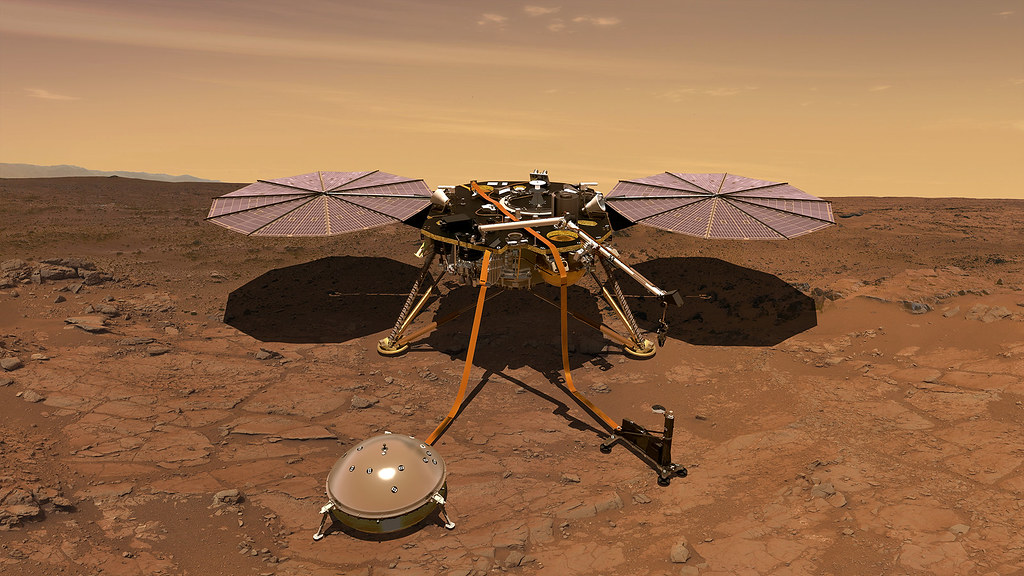 (RELATED: The InSight landing is just one of five amazing space events happening before the end of 2018. Read about them here!)

Since InSight's SEIS instrument is so sensitive, not only is it being protected from ambient winds by a dome, but the mission team is taking no chances.

With there being even the slightest chance that Martian atmospheric conditions could interfere with its quest for marsquakes, the mission team decided to give the lander a way to separate the effects of wind and pressure from the data SEIS collects.

As a result, extraterrestrial weather enthusiasts are getting a bonus - a weather station on Mars!

Not only that, but this is the very first continuously-monitoring weather station ever put on Mars.

Missions in the past - Viking, Pathfinder and Phoenix - have collected weather data, and the Curiosity rover is still collecting readings of temperature and pressure from Gale Crater, but none of these collected data continuously, like weather stations do here on Earth.

Since SEIS collects seismic data continuously, and the science team will need to know if anything is interfering with that data, InSight's weather station - formally known as the Auxiliary Payload Sensor System, or APSS - will also collect data continuously.

So, that's a first on Mars!

• Temperature and Winds for InSight, or TWINS, a repackaging of Curiosity's Rover Environmental Monitoring Station (REMS) instruments, with two sensors placed at opposite ends of the lander platform, and
• a centrally-mounted ultra-sensitive pressure instrument, designed to detect tiny fluctuations in Mars' extremely thin atmosphere.

At the same time, the lander will use its instruments and cameras to document wispy cirrus clouds that develop high above Elysium Planitia, any instances of fog that appear along the ground, as well as dust devils, and maybe even some weather phenomena that other missions, with their limited monitoring coverage, may have missed.

With this data, scientists here on Earth will be able to gain even greater insights into Mars' weather and climate, supplementing what was collected by previous missions, and what is currently being gathered, on a near daily basis, by Mars Curiosity, roughly 600 km away.

Keep watching The Weather Network, and theweathernetwork.com, for more content about InSight, and follow Scott Sutherland on Twitter as he covers events from NASA's Jet Propulsion Laboratory leading up to and during the landing.

Sources: NASA | The Conversation | NASA | With files from The Weather Network

WATCH BELOW: WHAT IS NASA INSIGHT AND WHAT WILL IT SHOW US?