Expired News - Life on Mars? Curiosity gives us more pieces to the puzzle - The Weather Network
We use cookies on this site to improve your experience as explained in our Cookie Policy. You can reject cookies by changing your browser settings.   READ MORE I ACCEPT

Life on Mars? Curiosity gives us more pieces to the puzzle

Thursday, June 7, 2018, 3:43 PM - NASA's Curiosity rover has discovered not only a wealth of organic molecules from Martian sediments, but also a seasonal variation for methane, bringing us ever closer to finding out if there was once, or is now, life on Mars.

Curiosity has been roving around on Mars for nearly 6 years now, having landed there on August 6, 2012. In that time, this 1-ton, car-sized robot has given us some keen insights into Mars' past and present. The most remarkable discovery scientists have made from the data the rover has sent back, so far, is that Mars was once a warmer and wetter place, with a thicker atmosphere - an environment which could have been friendly to live as we know it.

The rover's mission didn't stop there, though. It still has plenty to show us about our neighbouring world, and scientists working with Curiosity data have made two new discoveries that they unveiling Thursday - Mars' methane has a seasonal cycle, and digging into sediment layers has revealed a treasure trove of ancient Martian organics!

Watch below as NASA scientists discuss these latest findings, and take questions from the public:

Rovers, landers and orbiters have been detecting methane on Mars for some time. Methane is an important gas to look for, when exploring Mars, because one potential source of this gas is biological life.

In fact, the vast majority - roughly 95 per cent - of the methane in Earth's atmosphere is produced by plants, insects and animals.

One of the difficulties with methane detections on Mars, though, is that they've been very unreliable. They happened in spikes, at different locations, and this made it very difficult to lock down any pattern to it, and thus figure out exactly what is the source of this methane. Finding methane was important, though, because this gas has a fairly short 'lifespan' in an atmosphere, on the order of around 300 years. So, if we're detecting methane on Mars now, it is from recent sources, or even current sources, rather than methane produced billions of years ago.

These new results from Curiosity now show us that methane concentrations in the Martian atmosphere have a seasonal cycle. 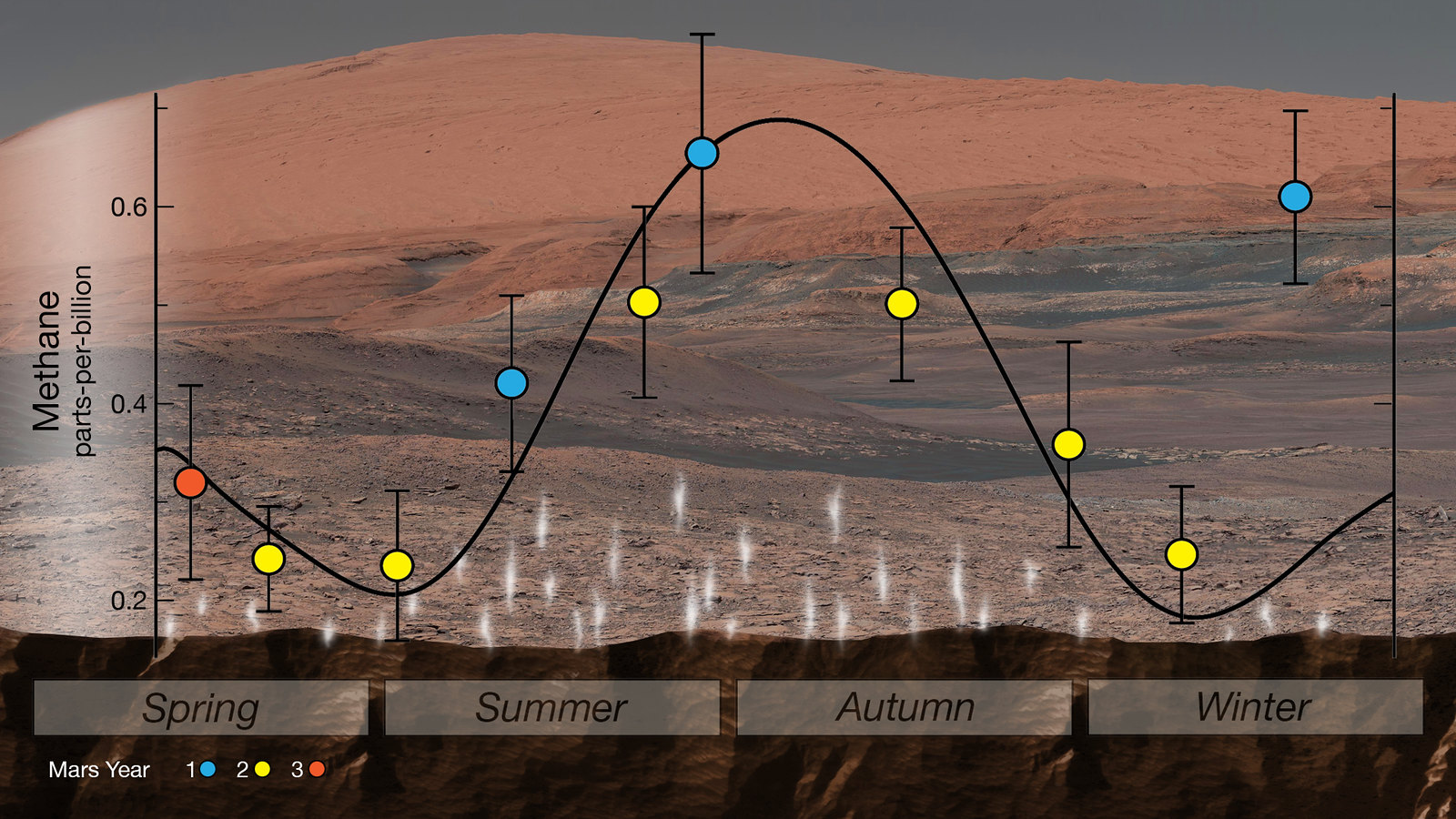 This detection, and even the seasonal pattern to the concentrations measured by Curiosity, are not a proof of life on Mars.

It is possible that this could be methane from biological sources, perhaps from microbes that live at a sufficient depth below the surface to be protected from the radiation from space. According to the scientists, that sufficient depth would be at least a metre and a half down into the ground. Any closer to the surface than that, and microbes would be bombarded by potentially lethal levels of radiation.

At the same time, there are non-biological sources of methane, such as water interacting with minerals like olivine.

Here on Earth, seasonal variations can easily be tied to life, since there is plenty of life on the surface of the planet. However, seasonal variations in temperature vanish as you go deeper underground. So, if there are Martian microbes under the surface, they probably see very little seasonal changes in temperature, or no seasonal cycle at all. Thus, they would simply release the same amount of methane at all times of the year.

The seasonal variation seen by Curiosity is likely due to methane, regardless of its source, becoming trapped in ice crystals in the ground during the colder time of the year. Only a small amount of the methane would reach the surface during this time, establishing the 'background' concentration that the scientists found. In the warmer part of the year, the ice crystals melt, which not only releases the trapped methane, but the seeping methane is also able to make it to the surface unimpeded.

According to Dr. Tanya Harrison, Arizona State University planetary scientist and Professional Martian, even if the methane is from a geological source, it's still very interesting. As she wrote in Medium:

To have liquid water interacting with rocks on Mars, that means you need a heat source. Until recently, scientists thought Mars’ core was solid and we’d seen no evidence for volcanic activity younger than about 100 million years ago. But the Mars Atmosphere and Volatile Evolution mission (MAVEN), which arrived in 2014, observed auroral activity at Mars. And this requires a magnetic field. So, perhaps Mars isn’t geologically dead on the inside after all! The InSight lander, on its way to the Red Planet right now, will help to answer this question. Stay tuned!

By drilling down into ancient sediment layers - sediments that match what we see on Earth from ancient watery environments - Curiosity has detected various organic molecules.

Watch below as NASA scientist Jen Eigenbrode discusses this discovery and its importance:


Back in 2014, there was a previous announcement by NASA, of the very first detection of organics by Curiosity. The rover made that discovery by drilling down into sediments at the Sheepbed mudstone site in Gale crater, but given the limited scope of that discovery, scientists have been looking for more sources of organics on Mars, to get a broader sample of the organics that are there.

According to the American Association for the Advancement of Science:

Tools on board the Curiosity rover extracted the new samples and heated them, analyzing the molecules that were released. The data reveal the presence of several organic molecules and volatiles reminiscent of organic-rich sedimentary rock found on Earth, including: thiophene, 2- and 3-methylthiophenes, methanethiol, and dimethylsulfide. The authors note that, because many of the molecules analyzed here differ by a single carbon sidechain, they may be fragments from larger molecules. Indeed, a comparison of these samples to organic traces in Martian meteorites also suggests that the former are derived from larger organic molecules.

Organic chemistry is simply a branch of chemistry that involves molecules that have carbon atoms in them, and molecules with carbon atoms can be produced by non-biological methods. So, again, as with the detection of methane, we're going to have to wait to know if these organic molecules are remnants of ancient forms of Martian life.

Where are the aliens?

So, there's been a common theme for these two announcements - neither of them are about aliens.

It would be very cool for NASA's Curiosity rover to discover alien life on Mars. Unfortunately, though, while Curiosity was equipped to determine if Mars was a more habitable place in its past, for life as we know it, and it is capable of revealing more of Mars' great science secrets, it does not have the right combination of instruments to actually find life. Curiosity's mission was specifically to provide another incremental step to Martian science, adding to the work done by Viking, Pathfinder, Spirit, Opportunity and Phoenix, to build the case for a Mars that was likely habitable in the past, and could - possibly - be habitable even now.

To actually find alien microbes on Mars, however, we'll likely need to wait for the ESA's ExoMars rover, or NASA's Mars 2020 rover.