Expired News - Meet invasive plant causing harm to homes and property value - The Weather Network
We use cookies on this site to improve your experience as explained in our Cookie Policy. You can reject cookies by changing your browser settings.   READ MORE I ACCEPT

Fallopia japonica, commonly known as Japanese Knotweed is an aggressive bamboo-like perennial that is native to eastern Asia. It was first introduced to North America in the 1800s and was used for home décor and planted for erosion control. Unbeknownst of the plant’s dangerous capabilities, some greenhouses only recently stopped its sale as an ornamental.

Officials in Canada and the U.S. are also warning residents not to touch giant hogweed plants, which have been popping up in large numbers in both countries.

Japanese knotweed has a strong root system and can spread about 10 metres from the parent stem and has the ability to grow through concrete and asphalt. This fast growing invasive species is known to change river flows, interrupting spawning beds, it rips through roadways and even threatens foundations of homes. 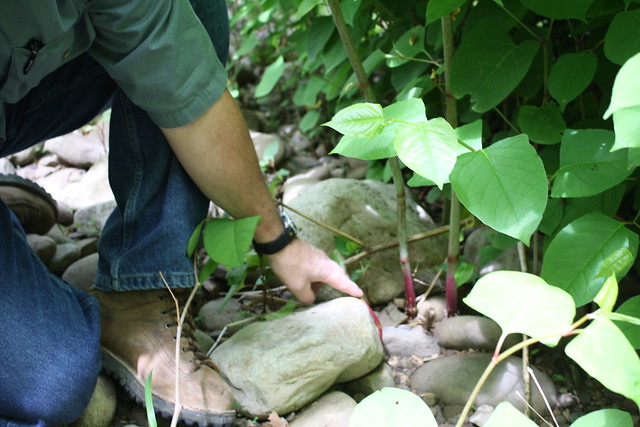 In Canada, this invasive species can be found from Ontario to Newfoundland and can also be seen in British Columbia. In Ontario, the plant is most common in southern and central areas of the province.

Knotweed commonly grows in gardens, along roadsides and near old buildings or former building sites, according to Ontario’s Invading Species Awareness Program.

Some studies suggest the plant has extended its range by climate change. While knotweed stems are known to survive temperatures as low as -35C, Canadian frigid winters could be the country’s saving grace as the cold will slow down the growth.

Knotweed was deemed a safety threat requiring lethal chemical intervention after it was spotted growing near the huge concrete footings of Vancouver’s Lions Gate and Ironworkers Memorial Second Narrows bridges, according to MacLean’s Magazine.

“The ministry of transportation takes knotweed extremely seriously,” Jennifer Grenz, program manager for the Invasive Species Council of Metro Vancouver told MacLean’s Magazine. “They are very aggressive in their treatments, because of the threats to infrastructure. We’ve had examples of plants we’re pretty sure have gone under four lanes of highway and have popped up on the other side.”

Crews from the district of Sechelt, B.C. attempted a chemical-free strategy to remove the plant that was discovered at Mission Point Park, MacLean’s Magazine reports. Knotweed was dug out to a depth of about three metres. However, the following year park officials reported the plant had in fact doubled in size.

While herbicide use in B.C. is strictly prohibited within one metre of a shore, the knotweed threat level is so high that Barry Gibbs, executive director of the Alberta Invasive Species Council, is trying to lessen provincial limits on using herbicides near waterways, according to MacLean’s.

Digging and pulling the plant out risks sending fragments of the plant afloat where it can spread to other areas.

“When you’re thinking of using an herbicide like glyphosate, you have to look at the risk of not doing it,” Gibbs told MacLean’s Magazine.

Gibbs stresses there must be early identification and tougher regulations, “before it’s like the U.K., where it’s essentially an epidemic.”

In the U.K. the highly invasive plant has devastated housing value and made it quite difficult to attain a mortgage or insurance. Homeowners have spent thousands in attempt to remove the plant. MacLean’s Magazine reports the U.K. government estimates that the cost of controlling knotweed has hit the $3 billion mark. Those who dump knotweed could face hefty fines and up to two years in jail.

The stalks grow straight up and can reach as high as 3 metres. The stems appear to be round and reddish-purple in colour. Large, heart-shaped leaves form in a zigzag pattern along the hollow stem. Flowers are cream-coloured that grow vertically from the stem in clusters. 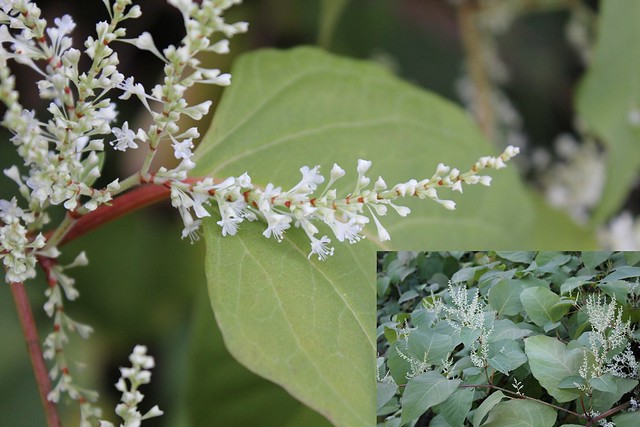 Japanese knotweed is known to first appear in the month of July before the plant starts to die in October, leaving behind brown stems.

Unfortunately, getting rid of this plant is very difficult.

While digging and cutting knotweed is a solution, this method can break up the rhizomes, creating more growing ends.

Chemical control is also an option. Glyphosphate (usually sold as Roundup) can be applied to every leaf during its blooming stage.

In the U.K. Maclean’s Magazine reports sap-sucking Japanese insects called psyllids that appear to feed off knotweed, have been introduced under strict controls.

“There is a lot of science that goes into it before it is determined if the biocontrol is a safe one for use in B.C. and in Canada,” Gail Wallin, co-chair of the Canadian Council of Invasive Species told MacLean’s.

Research shows it can take up to a decade using any effective control method to properly control a large infestation.