Expired News - Is the Great Barrier Reef now truly beyond saving? - The Weather Network
We use cookies on this site to improve your experience as explained in our Cookie Policy. You can reject cookies by changing your browser settings.   READ MORE I ACCEPT

News
Editor's Choice
Tracking Ian: Atlantic's next big tropical system brewing
The Great Barrier Reef has suffered back-to-back major bleaching events, but is the largest coral reef system in the world truly beyond all hope of saving, as some headlines have recently proclaimed?
OUT OF THIS WORLD | What's Up In Climate Change - a glance at the most important news about our warming world

Is the Great Barrier Reef now truly beyond saving?

Tuesday, June 6, 2017, 10:24 AM - The Great Barrier Reef has suffered back-to-back major bleaching events, but is the largest coral reef system in the world truly beyond all hope of saving, as some headlines have recently proclaimed?

Both 2016 and 2017 have been very bad for the Great Barrier Reef. Due to rising ocean temperatures, the reef system, which lies along the northeast coast of Australia, has undergone two major bleaching events in the past two years. As a result, the overall health of this important ecosystem has been threatened as a result, and even more losses are expected later in 2017.

Bleaching is the term used to describe how warm ocean waters cause the corals to expel the colourful algae that provide them with a food source, thus turning the corals white. This leaves the corals vulnerable to disease, to invasive species of algae that do not benefit them, to encroaching populations of coral-eating crown-of-thorns starfish, and unless the ocean temperatures cool enough for the beneficial algae to return in a timely manner, the corals can die of starvation.

The Australian government has had a plan in place since March 2015, the Reef 2050 Long-Term Sustainability Plan, which has, at its core, a statement of how the reef's "Outstanding Universal Value" (as defined by the World Heritage Convention) was to increase every decade between the plan's introduction and the year 2050.

Recent gatherings of reef scientists have come to a somewhat startling conclusion, though.

So much damage has been done to the reef by these back-to-back bleaching events that the Reef 2050 Plan is now simply not enough to keep the health of the reef system from continuing to decline. 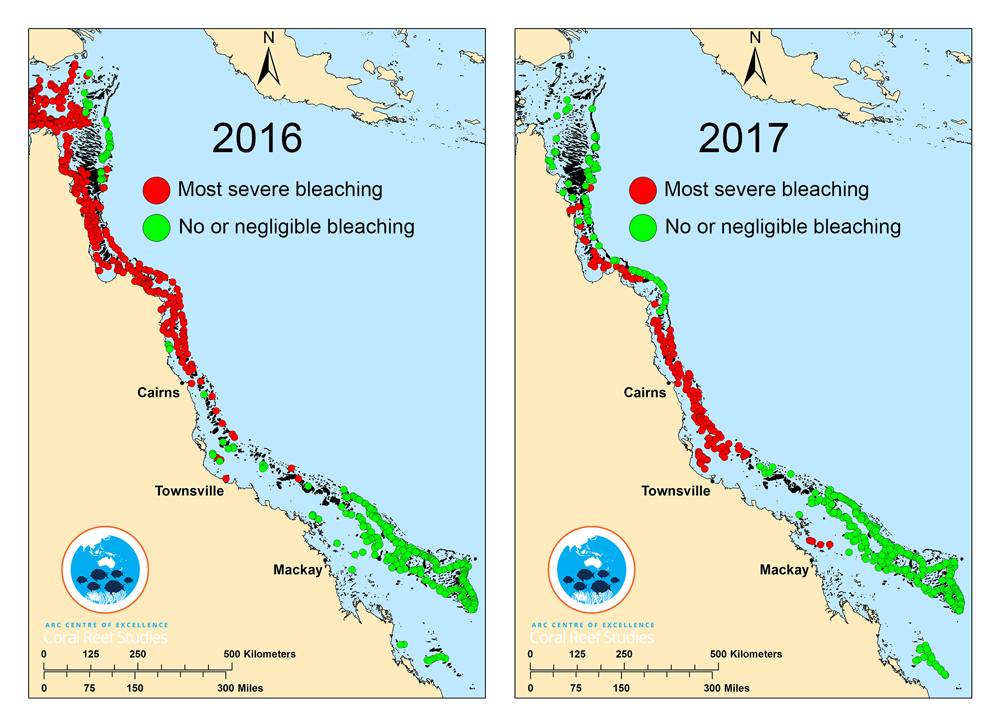 This does not, however, mean that the scientists have placed The Great Barrier Reef on hospice care, simply awaiting the time when it will be dead and gone.

Firstly, for any sustainability plan for the reef to work, experts say the plan must take into account climate change and include measures to combat it. Currently, the Reef 2050 Plan does not.

An expert panel that evaluated the Reef 2050 plan in early May stated:

"Members agreed that in our lifetime and on our watch, substantial areas of the Great Barrier Reef and the surrounding ecosystems are experiencing major long-term damage which may be irreversible unless action is taken now. The planet has changed in a way that science informs us is unprecedented in human history. While that in itself may be cause for action, the extraordinary rapidity of the change we now observe makes action even more urgent."
"The Panel considers that action to reduce emissions of greenhouse gases must be central to the response. This needs to be coupled with increased efforts to improve the resilience of the coral and other ecosystems that form the Great Barrier Reef. The focus of efforts should be on managing the Reef to maintain the benefits that the Reef provides."

At the recent Reef Summit, in Townsville, Australia, scientists in attendance echoed this call for action.

"The last two years highlights the need for urgent action to slow coral decline," Dr. Russell Reichelt, the Chairman of the Great Barrier Reef Marine Park Authority, said in a statement. "The Great Barrier Reef is a large and resilient system that’s previously shown its capacity to bounce back, however the current changes are undermining the resilience of the Reef."

"Summit participants voiced their strong concern about the need for global action to reduce greenhouse gas emissions, the driver of climate change."

Secondly, though, while the Reef 2050 Plan cannot achieve its core goal, according to The Guardian, experts are calling for a switch to a much more achievable goal - maintaining the ecological function of the reef system.

As The Guardian reported, a spokesperson for the Great Barrier Reef Marine Park Authority said, "The concept of 'maintaining ecological function' refers to the balance of ecological processes necessary for the reef ecosystem as a whole to persist, but perhaps in a different form, noting the composition and structure may differ from what is currently seen today."

Basically, without some concrete plans from the Australian government to reduce the country's contribution to climate change, and keep global warming to 1.5oC above pre-industrial temperatures, the scientists are advocating a switch of tactics.

Rather than the plan trying to meet an apparently impossible goal of improving the reef's overall health going forward, the scientists want the plan to focus on maintaining as much of the reef as possible for its ecological value. Thus, even as the health of the reef declines and the reef environment changes, efforts would go into keeping what is left viable, in its role as a source of food and shelter for various species of fish, its role in the life cycles of other important species, as well as for shoreline protection from waves, and even benefits to humans for fishing and tourism.

This definitely saps any optimism out of the issue, however it highlights exactly how dire the situation is, and how important it is that we have immediate action to combat climate change.