Expired News - How warming ocean water affects Atlantic hurricanes - The Weather Network
We use cookies on this site to improve your experience as explained in our Cookie Policy. You can reject cookies by changing your browser settings.   READ MORE I ACCEPT

Thursday, October 18, 2018, 3:24 PM - The latest IPCC report shows clear signs of the overwhelming impact human activity is having on the planet. Surface and satellite data confirm that global warming observed during the last century is directly related to greenhouse gas emissions, and that a great deal of the overall warming measured is ocean related. But, how does this thermal increase affect hurricane activity in ocean basins like the Atlantic?

Earlier this week the remnants of two hurricanes, Leslie and Michael, moved through the Iberian Peninsula simultaneously. Leslie arrived in Portugal on October 13th as a powerful tropical storm with wind gusts of around 150 kilometres per hour. Early on the 14th, the storm slid into northwest Spain with gusts of 90 kilometres per hour. That same night the remnants of hurricane Michael arrived in northwest Spain with gusty winds, high surf and persistent rainfall.

Two ex-hurricanes in Spain at the same time?

Not a common scenario, especially if we review the historical meteorological record for this type of phenomena. 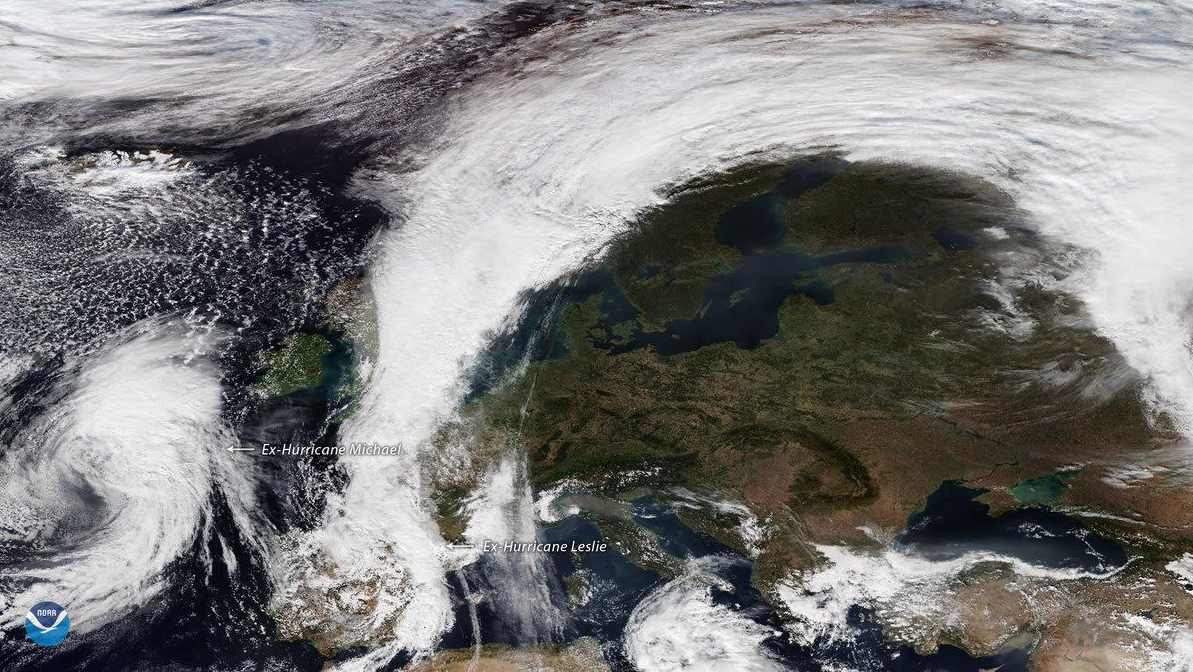 The last time a storm of similar characteristics affected the Iberian Peninsula was in October 2005 when hurricane Vince made landfall along the coast of Huelva, in southwest Spain. Tropical Storm Delta also had a great impact on the Canary Islands when it moved close to the archipelago later in November. Last year,hurricane Ophelia headed for Ireland, generating intense winds that sparked devastating wildfires across Portugal and northwest Spain.

Seeing how much our oceans have warmed in recent decades, it's no surprise that the potential energy available to feed these monsters of nature has also increased. Tropical storms need three fundamental conditions to survive or evolve into something more intense like a hurricane:

To understand how this cocktail of atmosphere-ocean interaction ingredients may have changed over the years and how Atlantic hurricane formation may be affected in the future, meteorologists analyze the relationship between sea surface water temperatures (SSTs) and the so-called Power Dissipation Index (PDI), an index that contains information on the frequency, intensity and duration of hurricanes. Both SSTs and the PDI index have increased significantly since the 1970s in relation to global warming. This past decade, the increase has been even greater than other very active decades in the Atlantic, like the fifties and sixties.

Recent studies presented in the AR5 IPCC report shed some light into this open debate on how warmer oceans would impact hurricane activity. Using numerical models to simulate the hurricane activity of the 21st century, together with other numerical methods that analyze the frequency of hurricanes and tropical storms in the Atlantic during the last 120 years, there were no remarkable results indicating that global warming caused by the increase of greenhouse gases may lead to a significant increase in the number of tropical storms in the Atlantic.

VIDEO: WHAT IS A HURRICANE EYEWALL?


Only one of the several modeling studies carried out, showed an increase in the formation of intense hurricanes (Category 3 or higher), but mostly during the second half of the 21st century and with a relatively low confidence.

From this information we can conclude that there is no clear detectable signal, beyond natural climatic variability, which demonstrates that human activity can cause an increase in the number of storms that form in the Atlantic. However, what we do know is that those that form, will likely produce higher rainfall rates and will be of greater intensity, with stronger winds and lower pressure values.

More powerful storms during future hurricane seasons would also mean an increase in cyclonic tides, not only due to an increase of the pressure gradient within the storm, but also due to sea level rise in many coastal areas of the Atlantic. We would live in a scenario more frequented by Category 4 or 5 hurricanes, which are the most destructive. As far as Europe or North America are concerned, as SSTs increase in many other regions of the Atlantic beyond the tropics, it would also be easier for storms that form in or near tropical ocean waters, to reach higher latitudes. It will also increase the probability that hurricanes like Leslie, moving further north and east than usual, could remain stronger and touch land as a Category 1 or even higher.

Experts warn that a majority of numerical studies conducted to simulate the future warming of our oceans show that the Atlantic, especially the northern hemisphere ocean, will warm up at a much faster rate than other oceans of the world.

VIDEO: THE MOST DANGEROUS ASPECTS OF A HURRICANE