Expired News - Interactive map shows how much space junk is flying around Earth - The Weather Network
We use cookies on this site to improve your experience as explained in our Cookie Policy. You can reject cookies by changing your browser settings.   READ MORE I ACCEPT

Interactive map shows how much space junk is flying around Earth

According to NASA, there are more than 500,000 pieces of space junk -- i.e., satellites, space craft remains and meteorite bits -- floating around the Earth, traveling at speeds up 17,500 miles per hour. That number is continuing to rise and it's something that engineers have to take into account when they design new space-bound technology.

Given the speed that debris is swirling around our planet, even the tiniest speck of junk could cause serious damage to an active satellite or space craft.

RELATED: Check out all the asteroids that are close to Earth

The US. department of Defense maintains an accurate log of all the objects in the Earth's orbit that are larger than a softball -- and if you'd like to get an idea of what all that might look like, you can -- via an interactive map called Orbital Objects.

In the 50-plus years that humans have been zipping through space more than 6,000 satellites have been launched. While some have made their way back down to Earth, more than 3,600 remain in orbit.

It's estimated that between 100 and 150 tonnes of space junk re-enters our atmosphere each year -- with the vast majority of it burning up before it hits the ground.

Scientists are looking to develop methods of removing some of the space junk that's currently in orbit.

Some worry that if we don't act fast enough, the Kessler syndrome will be observed. This would occur if space debris continues to pile up, eventually reaching the point where it would be impossible to launch new objects without creating a collision.

While mankind has come a long way in terms of technology, it looks like we still need to work on cleaning up after ourselves.

You an view the Orbital Objects map here. 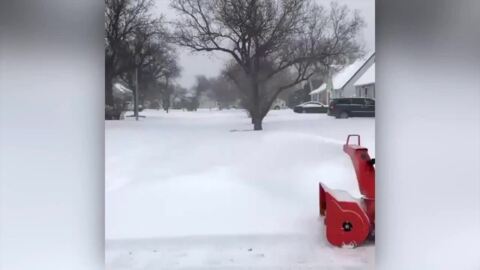