Expired News - One of the largest icebergs ever seen is about to break away - The Weather Network
We use cookies on this site to improve your experience as explained in our Cookie Policy. You can reject cookies by changing your browser settings.   READ MORE I ACCEPT

News
Editor's Choice
PHOTOS: Florida towns devastated as Ian hits
OUT OF THIS WORLD | Earth, Space And The Stuff In Between - a daily journey through weather, space and science with meteorologist/science writer Scott Sutherland

Thursday, June 29, 2017, 12:55 PM - One of the largest icebergs ever seen is about to break away from Antarctica's Larsen C Ice Shelf, and scientists say that when that happens, the rest of the ice sheet will likely begin to disintegrate.

After years of watching an immense, 300 metre-wide (1,500 feet-wide) rift spread through the Larsen C Ice Shelf, researchers with Project MIDAS - a UK-based Antarctic research project who are investigating the effects of a warming climate on this ice shelf - are saying that a calving event, where a huge iceberg breaks off from the ice shelf, is imminent. 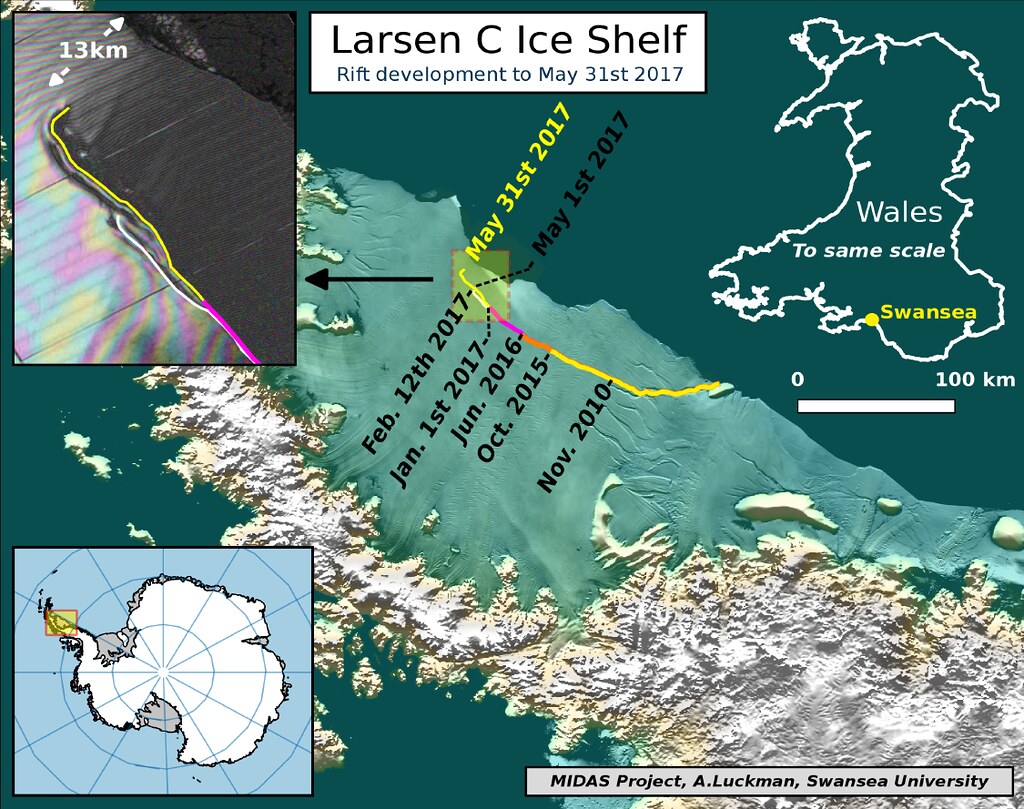 Project MIDAS tracking map of the Larsen C ice shelf crack, from 2010 up to the end of May 2017. Credit: MIDAS Project/A. Luckman/Swansea University

This crack was first noticed in 2010 and has been watched since, but its progress has been accelerating since 2015, and it has gotten worse over the past year.

Now, according to the scientists monitoring it, this portion of the ice shelf is pulling away at a rate of over 10 metres per day - three times what they were seeing previously.

These are the fastest speeds they've ever seen for ice movement in the Larsen C ice shelf.

This comparison of Sentinel-1 satellite images reveals the speed of motion of the ice shelf, in early and late June 2017, with a significant increase in speed in the latter (right) image. Credit: MIDAS Project/A. Luckman/Swansea University/ESA.

As of now, it may be merely hours, or possibly up to weeks, before this immense crack finally completes its spread to the edge of the ice shelf, and finally calves off this huge iceberg, but it really is only a matter of time.

In a blog post, the Project MIDAS scientists stated:

When it calves, the Larsen C Ice Shelf will lose more than 10% of its area to leave the ice front at its most retreated position ever recorded; this event will fundamentally change the landscape of the Antarctic Peninsula. We have previously shown that the new configuration will be less stable than it was prior to the rift, and that Larsen C may eventually follow the example of its neighbour Larsen B, which disintegrated in 2002 following a similar rift-induced calving event.

The ice shelf and imminent iceberg are compared to Wales, above, however for a more North American reference, when this iceberg finally pulls away, it will be roughly the same size as Prince Edward Island or the state of Delaware.

The Larsen C ice shelf is a wide expanse of glacial ice that extends out over the waters off the east coast of the Antarctic Peninsula. It is attached to the glaciers on land, which rest directly on the bedrock of the peninsula, but it is far more vulnerable, as warming ocean waters are eroding these ice shelves from the bottom up.

Larsen C one of several ice shelves in the region. The Larsen A and Larsen B ice shelves, which are farther north of Larsen C, closer to the tip of the Antarctic Peninsula, experience similar large calving events in the past, and the rest of those two ice shelves quickly retreated in the aftermath - Larsen A in 1995 and Larsen B in 2002. Larsen D, which is farther south towards the main continent, remains intact and largely stable, however it is very narrow, and is more protected by the rugged shoreline of that part of the peninsula.

It is winter in the southern hemisphere now, and the Larsen C ice shelf hasn't seen the Sun rise since the first week of June, thus the area is in perpetual darkness (the footage in the video, above, was shot back in January and February). Be it persistent warm surface water under the ice shelf, or an increase in surface winds, or faster ocean currents in that region, or a combination of some or all of these factors, this calving event is still accelerating.

Icebergs calving off of ice shelves is a natural part of glacial processes in Antarctica (and in other regions of the world), so this event is not necessarily a direct result of global warming and climate change. The size of this particular event, and the quickened pace of it, even though the region is now in winter, does seem to continue a trend on the Antarctic Peninsula, though, of bigger icebergs, faster-moving ice, and collapsing ice shelves. We simply cannot ignore the potential role of climate change in this event.

Watch Below: A 10,000-year-old ice shelf on verge of collapse